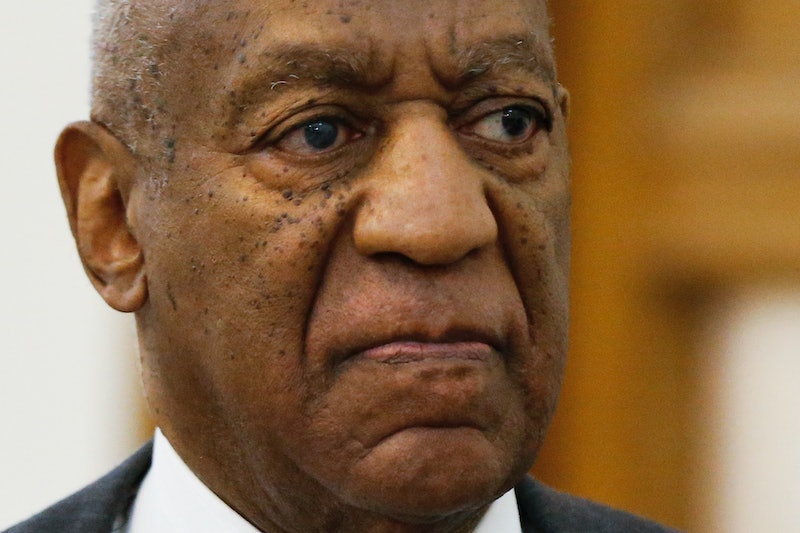 Bill Cosby will face a pretrial hearing on Tuesday, Sept. 6, during which a date for his upcoming federal sexual assault trial may be decided. In preparation for the pretrial hearing, which focuses on the 2005 allegations of drugging and sexual assault made by Andrea Constand, Cosby's legal team has been attempting to curb evidence that could heavily influence the jury selected for Cosby's trial. This jury will have the difficult task of convicting a once-beloved American icon who, through the accusations of nearly 60 women, continues to look more and more guilty. Cosby's pretrial could reveal the case's next steps — specifically, in terms of a jury selection date.

The lawyers will likely fight to keep out several pieces of evidence. One of the highest pieces on their list: throwing out the particularly damaging deposition their client gave in 2005. The deposition was given during Constand's 2005 civil lawsuit, during which Cosby admitted to giving women powerful sedatives before engaging in what he claimed were consensual "romantic rendezvous" with them. According to USA Today, his lawyers claimed that Cosby was promised immunity in exchange for the testimony, but a judge found that wasn't true.

Cosby's legal team also hopes to prevent jurors from hearing a taped phone conversation between their client and Constand's mother. The conversation, recorded in January 2015, shows Cosby offering to pay for Constand's higher education and therapy. Cosby's legal team insists that Pennsylvania law be applied to this case (where Cosby called from), which requires two-party consent for phone conversations to be recorded. But Cosby placed the call to Canada, which only requires one-party consent.

If found admissible in court, these would all be aspects of the case jurors would need to consider. Jury selection will come some time after a trial date has been set.

Contrary to other types of jury selection, this trial will not require for jurors to be unfamiliar with the case. According to ABC News senior legal correspondent and analyst Sunny Hostin, the judge will focus instead on whether or not perspective jurors have already formed an opinion on Cosby. Hostin told ABC:

In a high profile case, you don't want a juror who has never heard of the case because that's a juror who's not well-informed. Your ideal juror in a celebrity criminal case is a juror who has heard of this, but has an open mind and can put aside everything he or she has heard, sit in that courtroom day in and day out, listen to evidence as it comes in and then make a decision. There are jurors that can do that, and that's why you never know what a jury is going to decide. Some of the decisions [in past celebrity criminal cases] have been surprising for everyone who had been watching.

Because Cosby has already admitted to using quaaludes drugs on women, it will be up to the jurors to determine consent between Cosby and the 58 women who have accused him of rape or sexual assault. It will clearly be an uphill battle for his legal team to prove his innocence.

More like this
Sarah Everard’s Killer Wayne Couzens Is Appealing His Whole-Life Sentence
By Sophie McEvoy
How To Fight For Reproductive Rights, Based On How Much Time You Have
By Courtney Young
LGBT+ Men Fleeing Afghanistan Were Denied Asylum By The Home Office, New Findings Show
By Sam Ramsden
The Music Industry Continues To Fail Black Women
By Precious Adesina
Get Even More From Bustle — Sign Up For The Newsletter