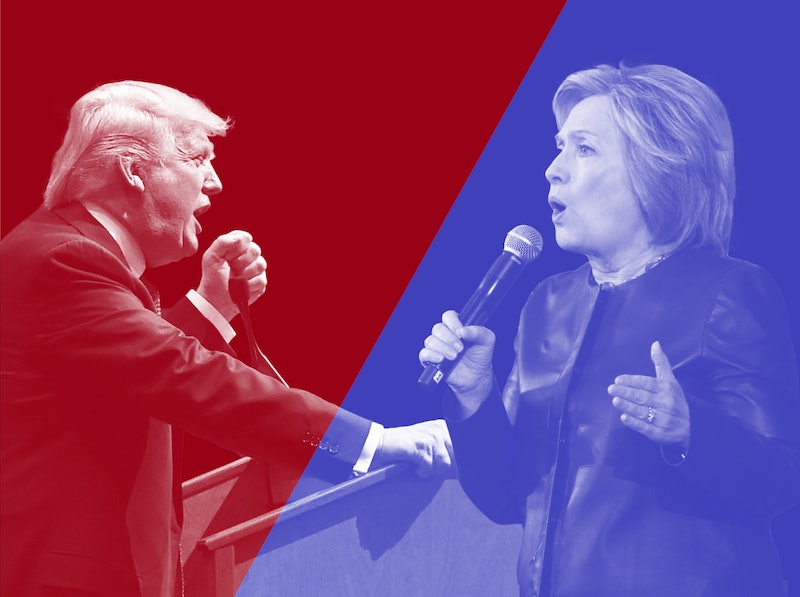 A national survey released by CNN/ORC on Tuesday showed that Donald Trump is leading Hillary Clinton by two points. In a survey of likely voters (meaning they're not all necessarily registered), the CNN/ORC poll showed that Trump took 45 percent, with Clinton closely trailing with 43 percent. However, when the data was limited to registered voters, it showed that Clinton is is in the lead, with 44 percent to Trump's 41 percent. It's the latest poll in recent days to show that Clinton's once-significant lead over Trump appears to be slipping. According to last week's CNN poll of polls — which averages the "five most recent publicly released national polls that meet CNN's standards for publication" — Clinton's edge over Trump had been cut in half from her 10-point average lead earlier in August after the Democratic National Convention, dropping to 5 points by the end of the month.

The CNN/ORC poll indicates that the increasing revelations about the former Secretary of State's FBI interviews, including her claim to agents she didn't realize the letter "(C)" meant the information in emails was considered confidential, and the allegations that the Clinton Foundation fostered "pay for play" access to the State Department, may be taking its toll. However, while this poll may — and should — worry Clinton's campaign and her supporters, further analysis of the CNN/ORC data suggests that Clinton's recent rough weeks may not be the only issue at play.

Perhaps one of the more illuminating and potentially dangerous beliefs exposed through recent surveys is that some voters may hold the assumption that Clinton will win — even if they're not planning to vote for her. According to a report on Politico detailing the Tuesday CNN/ORC poll, six in 10 likely voters believe Clinton will win. On first glance, this might sound hopeful for Clinton supporters or those who oppose Trump. But there is a potential danger in resting on the laurels of Clinton's presumed victory, especially given Trump's ability to swiftly catch up in the polls.

Just a few weeks — even days — ago, many wondered if Clinton would cruise to a landslide victory on November 8. That perception may still be so pervasive that voters who lean toward Clinton, or at least who don't want to see Trump in the White House, may presume the presidency is a done deal, and thus not feel compelled to turn out to actually vote. What this latest CNN/ORC poll reveals is how very, very critical it is for the Clinton campaign to get out the vote.

For Clinton supporters, it's not safe to assume she will win; they need be vigilant in voting, and getting others to vote.