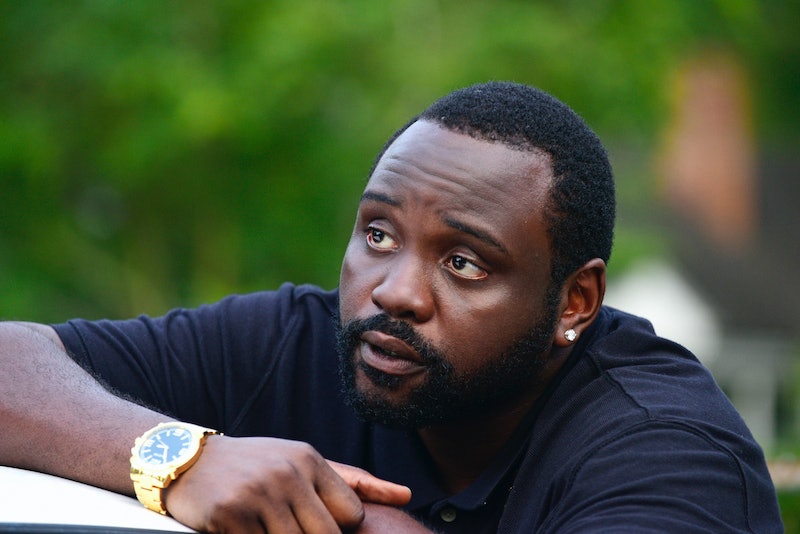 Donald Glover has combined his two personas and passions to create a new series, Atlanta, debuting Tuesday, Sept. 6, on FX. In the television industry, Glover got his start as a writer for 30 Rock and then went on to Community fame. Glover also raps under the moniker Childish Gambino. Now, his two halves are coming together with Atlanta, a show about two cousins entering the Atlanta rap scene. Since Glover is from Atlanta and the music industry, viewers may think that Paperboy from Atlanta is a real rapper too, however, that's not the case.

Paperboy, real name Alfred, is a fictional character, according to Rolling Stone, brought to life by Brian Tyree Henry. On Atlanta, we'll watch as Paperboy rises to fame in the city's rap scene and his cousin Earn (played by Glover) steps in as his manager. And though Atlanta’s Alfred and his alter ego are fictional, some may remember that there was a real rapper who went by the name Paperboy in the '90s. This seems to just be a coincidence, as is the fact that there's actually a record studio called Paperboy Studios in Atlanta. On the FX series, Henry’s character explains that he got the name Paperboy, because he’s “all about that paper, boy,” a line also repeated throughout the song that sets him on the path to fame.

In real life, actor Henry has been on that path for a long time. According to his FX bio, Henry attended Morehouse College in Atlanta before receiving his MFA from Yale, so he spent time in the titular city. He told Billboard of his time there, “I wasn’t born in Atlanta but this is definitely the city where I grew up. I lived here from 18 to 22 and this city was hugely instrumental in the foundation of who I am as a person.”

Once Henry got his start in acting, he appeared on TV shows like Vice Principals and Boardwalk Empire, but you are most likely to recognize him from his time on Broadway as the General in The Book of Mormon. Clearly, he has experience with musicals, though Atlanta's rap-focus is very different from the Broadway musical.

In the same Billboard interview, Henry discussed how he prepared for this musical role, explaining that he didn’t listen to any particular hip hop artist for inspiration because he didn’t want to influence how he played Alfred. He said:

“Rapping is really his big thing. I wouldn’t want to try to emulate anybody. I just really wanted Alfred to reflect people that we know in our lives that are trying to make it. I wanted him to reflect that person that somebody out there can see themselves and reflect it back to them.”

So while Paperboy isn't a real person, Henry is sure to bring authenticity to the role when Atlanta premieres.