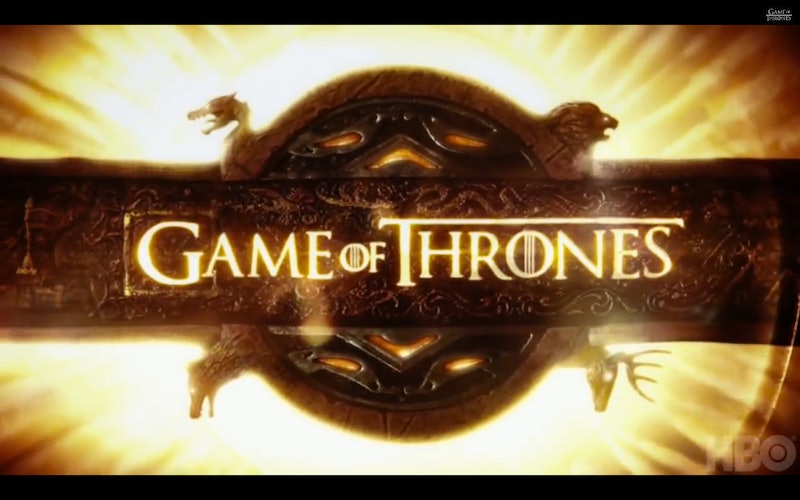 I have a new celebrity crush, and he's a composer. Ramin Djawadi wrote the soul-strumming Game of Thrones theme, which is enough to earn him a place on my "good people" list. On top of that, however, the Iranian-German composer (pictured below) is responsible for the Iron Man, Prison Break and Pacific Rim scores. The man has talent, range, and the twinkling eyes of a cherub.

The theme for Game of Thrones is incredibly catchy even without lyrics, and has inspired many fans to record covers. What's even more impressive about the song is the fact that Djawadi joined Game of Thrones less than eleven weeks before the show premiered. After Stephen Warbeck (known for Shakespeare in Love and Billy Elliot) left, Djawadi was hired to take his place. He states in an interview with The Hollywood Reporter, "I read the scripts, but the visuals trigger a whole new level of inspiration. Like the main title — they showed me this beautiful rough cut of the main title sequence. That really triggered me to write this theme."

As a fan of the sweeping main title sequence, I can't help but agree. There is incredible aesthetic pleasure derived from watching an intricately mechanized world unfold before our eyes. I find myself rooting, every time I watch the show, for the Castle Black ladder to spider its way up The Wall, and I look forward to the hints of what's to come. By focusing on new regions on the map and recording the effects of battles on major cities, the opening sequence sets the stage for each episode's action across Westeros, Essos and Sothoryos.

According to Forbes, Angus Wall and The Rock Paper Scissors group are responsible for constructing each opening sequence. John Axelrod reports that Wall and his team "begin by designing digital corkscrews, gears and chains, then apply high school physics to figure out how they will raise the miniature municipalities." So, while each cities are animated, the theoretical clockwork is accurate. This all but guarantees that there are fans who are sweating over plans for their own mechanized Westeros.

The rich detail of the opening sequence is complemented by the rhythms of the score; a pulsing drum evokes the tramp of marching feet, while the swooping cello echoes the loping stride of a direwolf. The golden arms of the clockwork sun slice past the screen, creating the shivering sound of metal on metal. Ultimately, the music and animation in the Game of Thrones opening sequence leave the viewer excited and slightly on edge. A fire crackles behind each sigil, and one has to wonder: which house will rise or fall during this "day" in Westeros? Winterfell is in ruins, so which piece of delicately-timed clockwork will be the next to burn?

Small wonder, then, that fans are recreating this dramatic sequence in their own way, paying tribute to the master clockmakers who created the music and miniatures. In this clip, Break of Reality does a full cello cover. I am a fan.

Djawadi spoke to Forbes about the cello solo, saying, "It can be very dark and moody, but also beautiful and emotional at the same time, and it's just perfect for the show." I couldn't agree more, and I can't wait to see what new wonders and ruins will be revealed in the opening sequence during the next season.

And, just because it's also a beautiful song, here is The National performing "The Rains of Castamere" as the end cap to this musical interlude. Live on, Game of Thrones geekery, and keep the covers coming.

More like this
The Meaning Behind Beyoncé’s Song "SUMMER RENAISSANCE" Includes A Special Tribute To Jay-Z
By Alyssa Lapid
The Controversy Around Beyoncé's “ENERGY”, Explained
By Frances Stewart
Everything To Know About Beyoncé's New Album
By El Hunt and Radhika Menon
Yes, You Do Know The Song From The 'Black Panther: Wakanda Forever' Trailer
By El Hunt
Get Even More From Bustle — Sign Up For The Newsletter