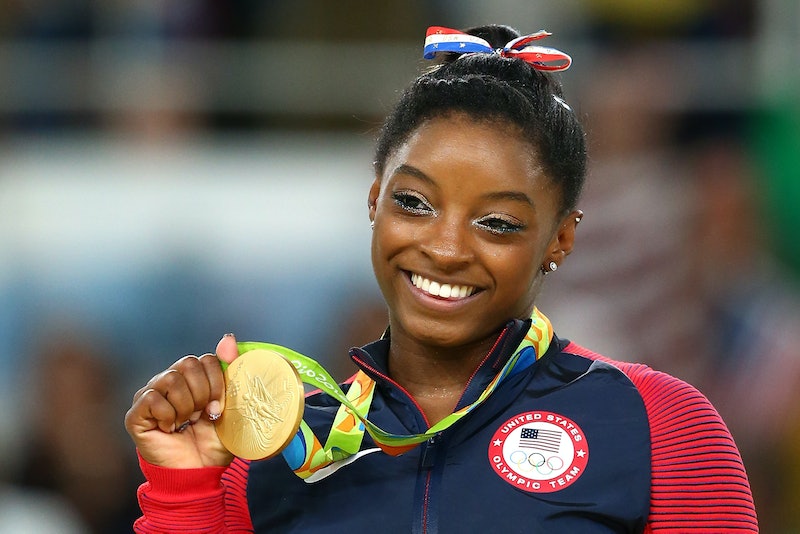 As a person with exactly zero gold medals, I'd be more than tickled to meet major hunk Channing Tatum in the flesh. I mean, I've had a relentless crush on the dude since I laid eyes on him in Step Up. But being that Simone Biles is an extraordinary athlete and four-time gold medalist, getting acquainted with the actor seemed like it was just another day for her. After all, he's probably the millionth celebrity she's met after competing and dominating the Olympics. On the other hand, it appeared that Tatum was ecstatic for the opportunity to meet Biles, if his and Ellen Degeneres' social media accounts are any indication.

While Tatum was excited to meet the gymnast, it seems as though he was perhaps just a little more excited to get his hands on her shiny new necklaces. You know, the blue and green kind that have gold and bronze circles hanging off the ends. I mean, he even said as much. In his Instagram caption of a backstage picture of himself and Bilesat the The Ellen Degeneres Show, he wrote, "Not sure who’s more hyped in this picture, my guys in #MagicMikeLive because they’re performing on @theellenshow today or me because I got to hang with @simonebiles and wear a gold medal."

But, regardless of his probably rhetorical, supposed-to-be lighthearted musing, it seems like DeGeneres answered that question for him in one hilarious and slightly concerning (for Biles, anyway) picture:

The actor got to hold all four gold medals and stand on a makeshift Olympic podium. And he looks a little too pleased with his new jewelry. Like, if I was Biles, I'd have my security team follow him around or something. Those babies were hard earned and not easy to come by and it looks like Tatum is loving their sparkle. But it appears that the Olympian is a far better person than I.

Not only did she let Tatum borrow her medals, but she left DeGeneres borrow them too, and she looks more than happy to spread the wealth. You know, so long as neither of them booked it out of there once the photo was taken.