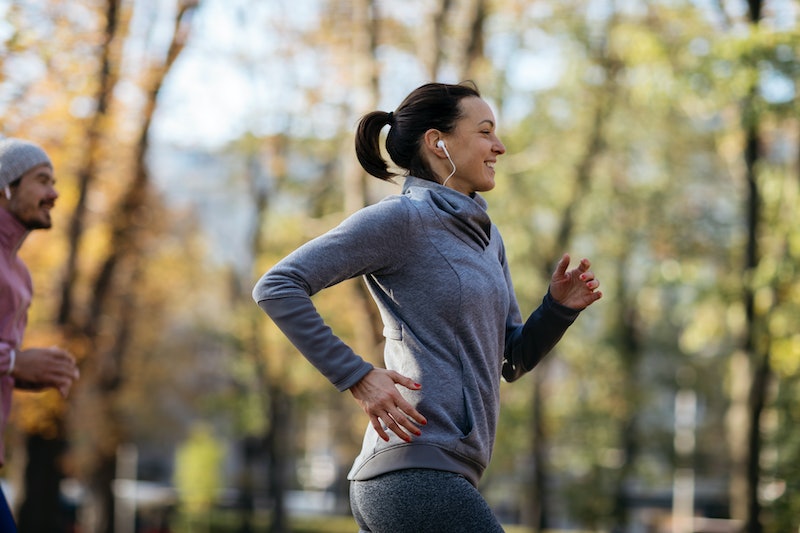 For about 24 hours during Rio, it seemed like all Olympics coverage was focused on one story: That power walker dude who appeared to suffer intestinal problems, passed out, and then finished the race anyway. And I feel like for a lot of humans, especially those of you who do "running things," this event may have felt at least a bit familiar, and definitely sparked the question: Why do we need to poop when we run?

Warning: True and utter disgustingness in which I will type variations on the word "poop" probably, like, a minimum of 15 times is ahead. You have been warned.

In the latest video from Gross Science, a web series from PBS Digital Studios, host Anna Rothschild explores the phenomenon of having to poop while running, which is apparently both very common and very much unexplained. Apart from "the power walker dude," whose actual name is Yohann Diniz and who holds a few casual world records in his sport, there have been countless people throughout history, both famous and and not, who have experienced some, uh, intestinal discomfort when going on long runs. I personally don't know what that is like, as I do not torture myself by running, but I am here to give voice to all the running poopers. You are not alone.

In a study published in the International SportMed Journal, for example, between 30 and 83 percent of runners have reported experiencing gastrointestinal issues during both training and races. For long-distance triathletes, that percentage rises into the 90s.

The phenomenon is so common, in fact, that there are several slang terms to describe it, including runner's diarrhea and "the trots." And, of course, there are a number of suggested remedies. The Mayo Clinic suggests cutting down on fiber-rich foods up to two days before a big run or race, and not consuming anything for the final two hours in prep. Oh, and wear loose clothing — not because of that, because clothing that's tight around your abdomen can cause cramping and intestinal distress. Other tips include avoiding warm liquids, alcohol, caffeine, sugar, fatty foods, fruits, salads and legumes.

If it seems like these suggestions are casting a very wide net, it's because there's no singular cause for runner's diarrhea that's as yet be identified. But, if you're curious, here are a few possibilities according to Gross Science.

1. It's Getting Hot In Here

So you know when it's hot, and you leave a chocolate bar in your car, and when you come back, it's all melted? Um, think that. But with the car being your body, whose internal temperature raises during prolonged bouts of exercise, and the chocolate as your poop. Please know this is as gross for me to write as it is for you to read.

All that jostling around... it gets stuff moving. Like an avalanche. I'm killing the simile/metaphor game today.

This jostling effect may also contribute to the urgency factor that tends to accompany most runner's diarrhea incidents.

When you're exercising, the muscles that you're engaging require more blood flow. That means the rest of the body gets less, and that includes your bowels.

Hardcore, long-distance running, whether it's a race or just a training trot, puts your body through a lot of stress. Especially when it's a high pressure situation (Turkey Trots are very high intensity, I get it), your body reacts as it is want to do, which to fully embarrass you.

Check out the full video above.