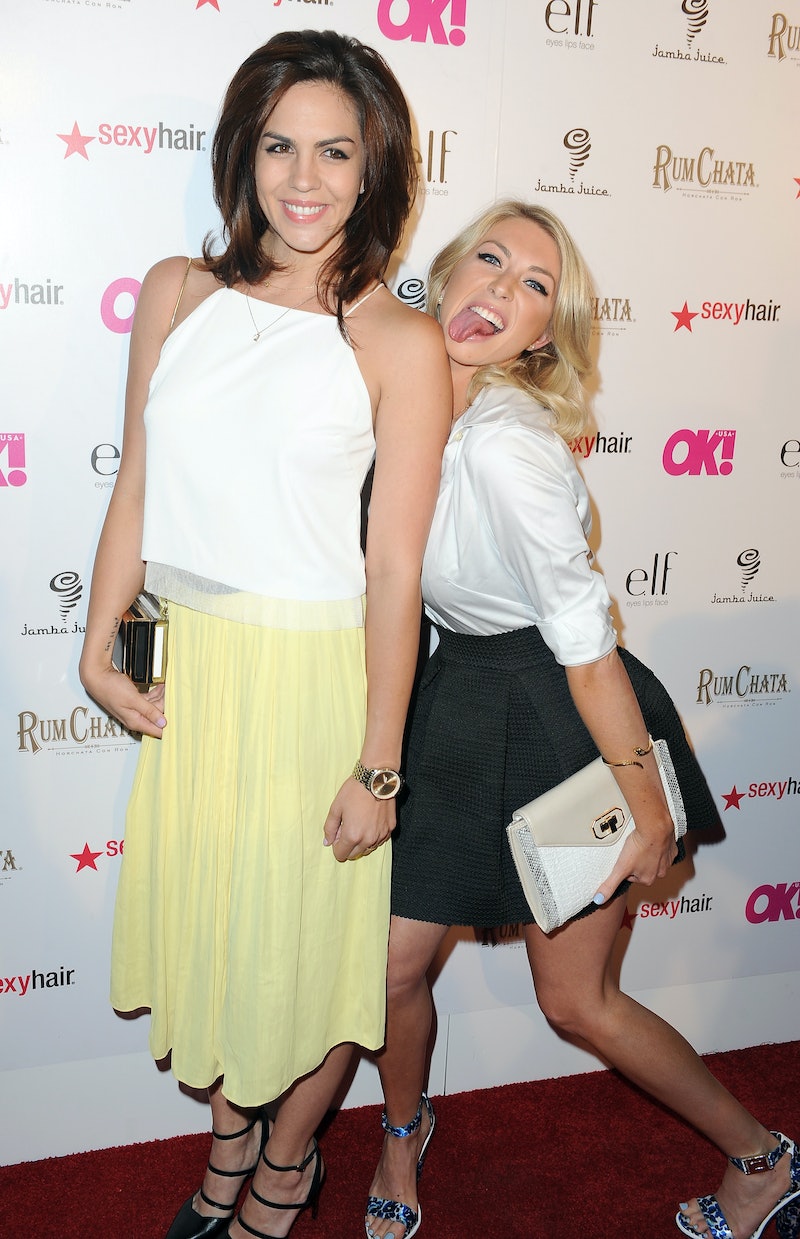 In a move that will shock zero Vanderpump Rules fans, Stassi Schroeder crashed Tom Schwartz and Katie Maloney's honeymoon. If you follow the three on social media, then you know that Stassi joined the newlyweds in Bora Bora on their romantic getaway, because of course she did. Based on their Instagram photos, it appears that Stassi is now single and didn't want to be alone, so decided to travel to the tropical location to hang with her two best friends. This is kind of like that time Stassi crashed their engagement party with Kristen Doute, but infinitely worse.

As much as I'd like to give Stassi a hard time about joining someone else's honeymoon, according to the former SUR server, it was actually Tom and Katie's idea. While chatting with Kristen and her boyfriend, Brian Carter, during her Sept. 1 Straight Up with Stassi podcast (yes, she has her own podcast), Stassi said that she got a text from them inviting her to Bora Bora. "Katie and Schwartz were texting me about joining their honeymoon — not in a sexual way, 'cause that sounded weird just now — in a like 'we feel bad for you' way," she said. "Like, 'Oh, like you're the only person without a person. So, like you should come.'"

After both Katie and Schwartz assured Stassi this wasn't a drunk idea and had already had a great full week, what did she do? She purchased a one-way ticket to Bora Bora. Even she admitted, "I don't know if this is a good idea or like the worst idea ever." Based on the photos, it sure looks like they're all having a great time together. Per Kristen, she and Carter were also invited by Schwartz to Bora Bora. Even though they aren't going, it sure seems like Katie and her hubby are over being alone on their honeymoon.

Now, I'm sure some of you are wondering if this will be part of Pump Rules. Well, my money is on yes, because it appears they are still filming for Season 5. After Stassi tried to coax Kristen into joining her, Kristen said on the podcast, "If I didn't have to work tomorrow for Vanderpump Rules I would be there. Thank you, producers, for not allowing me to go to Bora Bora with Stassi."

Fans will have to wait and see if it makes Season 5, but until then, here are some photos of Tom, Katie, and Stassi's honeymoon together. Warning: In typical Pump Rules fashion, some of the following videos do contain the occasional swear word.

That caption sounds about right.

At least she knows how to vacay the right way.

Having A Bad Time

Look at how far these two have come.

Do you think she'll hang this on her wall?

Now, here's the real kicker: If Stassi bought a one-way ticket to Bora Bora, does she intend to come home? She said during her podcast realizing her ticket purchase, "What am I going to do once Katie and Schwartz leave?" Based on the last photo above, it sure seems like she's leaving if she's talking about missing Bora Bora, but who knows with Stassi.