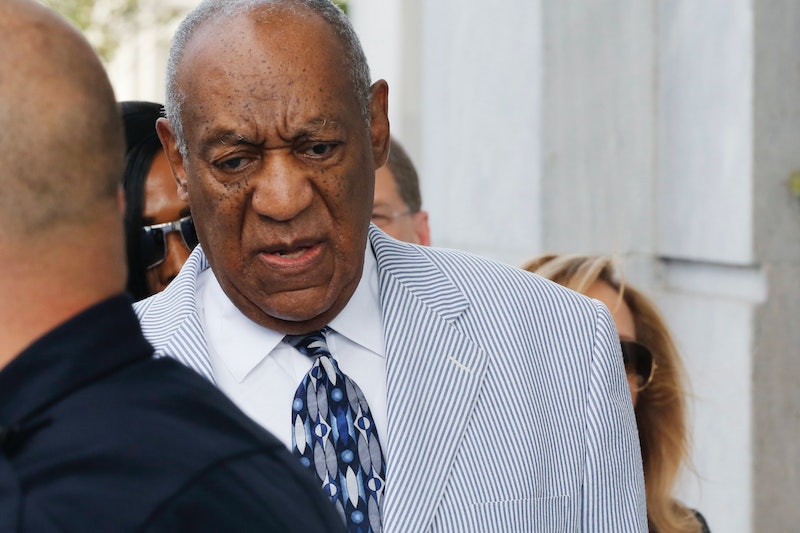 During the Sept. 6 pretrial hearings for Bill Cosby's sexual assault charges, the date for the start of his trial was finally decided. The Cosby trial will start on June 5, 2017, according to BuzzFeed. Needless to say, that's a very long way into the future, and there's a reason for that — according to national news reporter Jessica Testa, who live-reported on Twitter from the pretrial hearing, the judge said Cosby's defense attorney is "extraordinarily over-scheduled," forcing the court to delay the start of the trial for months longer than it intended or desired to.

In other words, for anyone keeping track, Cosby won't actually face a criminal trial for nearly nine months. The 79-year-old is charged with sexually assaulting Andrea Constand, a former employee of Temple University, who alleges the comedian and TV icon drugged and violated her back in January 2004. Her story is just one of nearly 60 made so far, by women who've accused Cosby of strikingly similar conduct — whether or not any of those other women will get to testify, however, is still an open question, as is whether Cosby's 2005 deposition on the incident will be presented to a jury. Cosby has pleaded not guilty.

The allegations against Cosby exploded into the national consciousness last year, spurred in large part by a comedy routine by Hannibal Buress that drew attention to multiple accusations that were already a matter of public record. Since then, however, supported by the slew of already-public allegations, dozens more women have come forward to paint a very similar picture of Cosby — many of the allegations are centered around drugged drinks, followed by sexual assaults. It's no shock that the prosecution is eager to introduce some of these other women's stories into testimony, as they would help establish a pattern of behavior on Cosby's part that could bolster Constand's claims.

The only question left, at least until the trial begins, is just how much of the evidence is actually deemed admissible and put before the jury. Cosby's defense team is vying to have his 2005 deposition kept out of the trial — in it, he admitted to acquiring Quaaludes to give to women he wanted to have sex with (although he did not admit to drugging women without their consent).

Whether that deposition makes it into the trial could have major implications on Cosby's eventual acquittal or conviction. And now, with a trial date set, legal observers and trial watchers everywhere will have plenty of time to consider what's likely to happen.

More like this
How The City Healed Five Years On From The Manchester Arena Attack
By Ella Glover
9 Honestly Unbelievable Revelations From The WAGatha Christie Trial
By Frances Stewart
UK Viewers Will Have To Wait To See Jessica Biel’s Killer Housewife Series
By Rachel Mantock
Don Crowder Successfully Defended Candy Montgomery, But His Story Ended In Tragedy
By Gretchen Smail
Get Even More From Bustle — Sign Up For The Newsletter