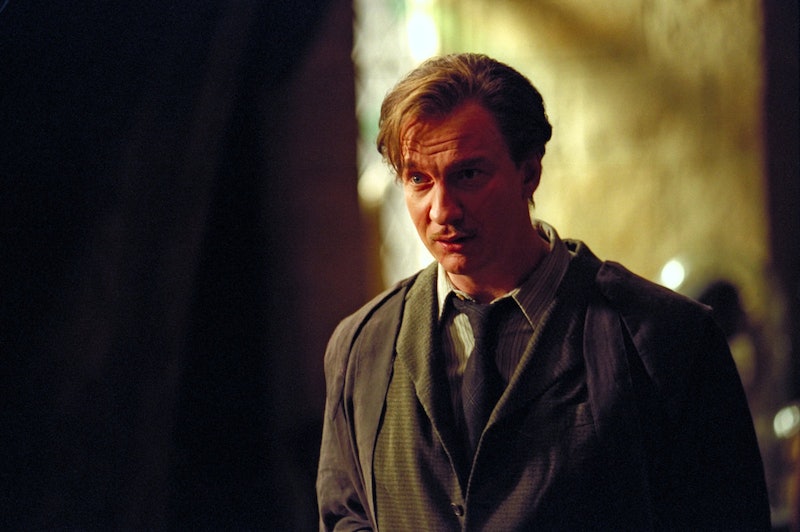 Three new Hogwarts e-books were released on Sept. 6, and the short books are filled with fascinating bits of trivia about Hogwarts and our favorite wizards from the Harry Potter series. In one of the biggest revelations from the books, J.K. Rowling writes that Lupin's werewolf condition is a metaphor for illnesses that carry a stigma.

In a section of Short Stories From Hogwarts of Heroism, Hardship, and Dangerous Hobbies, J.K. Rowling details the life of Remus Lupin, from childhood until his untimely death at the hands of Death Eaters during the Battle of Hogwarts. Lupin — who Rowling calls "one of her favourite characters in the entire Potter series" — was, of course, a werewolf. And according to the author, his lycanthropy is a metaphor for illnesses that exist in the Muggle world.

"Lupin's condition of lycanthropy was a metaphor for those illnesses that carry a stigma, like HIV and AIDS," Rowling writes. "All kinds of superstitions seem to surround blood-borne conditions, probably due to taboos surrounding blood itself. The wizarding community is as prone to hysteria and prejudice as the Muggle one, and the character of Lupin gave me a chance to examine those attitudes."

Remus Lupin alienated himself from the world because of his condition. He became a werewolf on his fifth birthday, as detailed in the short story about his life found in Heroism, Hardship, and Dangerous Hobbies, as well as on Pottermore. Remus's father, Lyall Lupin, encountered a werewolf, Fenrir Greyback, during his time working for the Department for Regulation and Control of Magical Creatures. He knew Greyback to be a werewolf upon sight, but the other members of the Ministry did not believe him. They teased Lyall, who grew angry and described werewolves as "soulless, evil, deserving nothing but death." Greyback heard these comments, and when the Ministry released him from custody, he plotted his revenge again Lyall Lupin. The werewolf journeyed to the Lupin's house, opened Remus' window and attacked the boy. Because the Greyback bit him in his wolfish form during the full moon, Remus was infected.

Lyall greatly regretted what he had said about werewolves. His son was the same as always — he wasn't evil or soulless, but clever and kind and smart. Still, Lyall decided to keep his son's condition a secret. The family moved constantly, upending their lives each time someone caught wind of the situation. "Remus was not allowed to play with other children, in case he let slip the truth of his condition," Rowling writes. "In consequence, and in spite of his loving parents, he was a very lonely boy."

His loneliness persisted, until one day a wizard named Albus Dumbledore arrived on his parents' doorstep and invited him to attend Hogwarts. At Hogwarts, he made true friends — James Potter and Sirius Black — who learned his secret and loved him unconditionally. After their death, he returned to his solitary ways, but he eventually found a home with his family, Tonks and Teddy.

In a separate section of the book, Rowling details the difficulties of living with lycanthropy. She doesn't discount the challenges of his condition, but she emphasizes that he lived an amazing life despite the difficulties— he had a wife, a son, wonderful friends, and a mission. We know, of course, how his story ends. Though his life was hard and much too short, he lived it brilliantly.