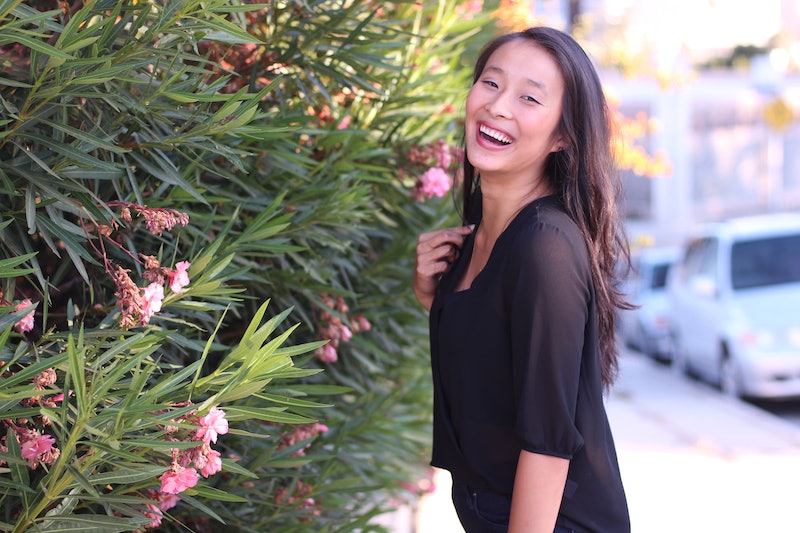 Periods. Women have them, no one seems to talk about them. They require monthly care — tampons, pads, maybe even pain killers. It's a few days of the body needing special attention, a little kindness maybe, but it's not a phenomenon that's entirely prohibitive. At least, for some. Eighteen-year-old Nadya Okamoto is not only advocating for the conversation around periods, but she is also taking action to ensure women — all women — get what they need while on them. "It really is part of my identity that I'm a period advocate," she says.

Perhaps that's because at the age of only 16, she founded and started her own non-profit, Camions of Care. With the help of its global partners, the organization spreads awareness, fosters education, and helps homeless women become more independent through the distribution of feminine hygiene products — providing women with the items they need to manage their periods healthily, humanely, and most importantly, with dignity.

The voice behind the non-profit's mission of self-care and self-empowerment took some time to find, with the muck of adolescent growing pains growing only murkier with situations so painfully out of Okamoto's control. At the age of nine, Okamoto, her mother, and her two younger sisters moved from New York City to Portland, Oregon, after her parent's divorce. Her mother, who attended Harvard at the age of 16, had a degree in corporate law, and faithfully prioritized Okamoto's and her sisters' education, granting the girls access to the best schools and athletics.

But in 2013, the spring of Okamoto's freshman year of high school, her mother lost her job, the family soon losing their apartment, too. The family of four was legally homeless, couch surfing among friends, which changed Okamoto's commute to her hard-earned, exclusive private school from 12 minutes each way to two hours. On the surface, Okamoto's resolve remained steady, but inside, she suffered through an emotional contention.

Battling the idea that her family was in the situation because she couldn't support them, which stemmed from a "typical child of divorce feeling" she says, Okamoto's daily affirmations shifted to degradations. "I would fill myself with this negative narrative," she says, which eventually manifested in self harm. "The worst part is that it worked." She became a star student, but it still wasn't quite enough. "I had thrown myself into work because that was my refuge from my personal challenges, and it was a reaffirmation of my potential," she says.

To deflect from her own hardships, she became inquisitive of others'. Her new bus stop was shared by several homeless women, and Okamoto's direct curiosity led to blunt questions: "What do you find most challenging about your living situation? Tell me about your childhood?" she asked. The answers formed into a common obstacle. For these women, menstrual "health" was non-existent, and periods their paramount, continual challenge.

Okamoto wrote down these women's shared stories about using brown paper bags, disposed t-shirts or socks, and anything else that was accessible and absorbent to use during their periods. "I was so angered by the poverty they experienced, and the abuse they were enduring. I kept trying to figure out why they were there. Why did they deserve this?" she says.

By her sophomore year, Okamoto's family was back in their home, but she had slipped into an unhealthy relationship — physically abusive to the point where the steady appearance of new bruises no longer could warrant new stories of origin. So one weekend, to avoid telling her mom the truth about the marks on her body, she checked herself into a women's shelter. She read her journal during those sleepless nights, filled with the stories of the homeless women, and formed new connections with others at the shelter.

The narrative of the women at the shelter echoed those from the bus stop. "It really came down to a lack of development opportunities, educational opportunities, and familial support," Okamoto says. All things she says she'd been given, regardless of her strife. "There were all these women who didn't have that, and it could really change their life." It was a pivotal realization, one that helped to end her abusive relationship.

"A lot of my motivation for wanting to give a voice to women and fight for women's rights comes from a place of understanding what it means to be silenced, or feel pushed down."

Okamoto's renewed appreciation for the opportunities she had been given initiated a flurry of research, where she learned there was no organization prioritizing menstrual hygiene. "[Organizations] didn't think women needed it, and that's because it's so stigmatized that women didn't speak up about it," Okamoto says.

"Because no one was doing anything, I didn't even think to ask anyone. I was like, 'I'll just do it.'" Within days, she had filed for non-profit status for Camions of Care, enlisting the help of her classmate at the time, Vincent Forand, to handle finance and logistics while she focused on the program's vision and outreach.

Within a week, they were distributing their first care packages on the streets of Portland, but realized that working to solve the issue in one city did not accomplish their global mission. So they turned to indirect distribution, working with partner non-profits who already served women across the world.

Camions of Care now makes 1,500 care packages a month (each includes nine tampons, four maxi pads, and five panty liners) — often specially accommodated for their partner organizations, such as omitting tampons when working with battered women shelters — and has addressed nearly 25,000 periods, with a goal of giving access to feminine hygiene products to 20 new women a week.

Run by a youth executive board, the non-profit has 22,000 committed volunteers of all ages nationally. To date, their care packages have reached 24 states and 10 countries, with 36 nationwide chapters, and its first international youth leader, in Nepal.

Now a freshman at Harvard University (on full academic scholarship), Okamoto's hope for Camions of Care is fueled by a dose of reality. "I realized that if Camions of Care disappeared within a couple months, there would've been no impact," she says. "If we stopped distributing, it just stops; there's no systematic change." She plans to continue distribution because, as Okamoto describes, the menstrual movement is a social change. "We're changing the way people think about periods, and we want to change the way young people talk about it, because that's the future."

But its her own future that will so drastically impact Camions of Care's. Inspired by former Texas Sen. Wendy Davis' 13-hour filibuster on the abortion restriction bill, Okamoto sent an email to the politician asking if she could accompany her to the 2016 Democratic National Convention. Davis said yes, and introduced Okamoto to plenty of other powerful women during the convention, including President of the Planned Parenthood Federation of America Cecile Richards and U.S. Representative for Illinois's 8th congressional district Tammy Duckworth.

Now, Okamoto wants to go into policy work, to work with legislators to make menstrual hygiene more accessible, with goals for coverage through government-assistant programs. "What I hope for is to engage leaders across the world and set an example for why our system should prioritize menstrual hygiene — why it should be an open conversation," she says. According to research done by Her Turn, in Nepal, approximately 30 percent of girls miss school each month as a result of their periods, 86 percent of girls report the same in Garissa, Kenya, and 23 percent of girls in India drop out after they start menstruating.

"If girls feel less confident and less capable on they're their periods — or they're told that they are — they're not going to be competing or participating at an equal rate, and that's gender inequality."

Though Okamoto claims it's her impatience that often causes her to act, she's continually inspired by the value her mother taught her, saying, "It's a privilege to speak and not have your voice silenced; take advantage of that."

With that as a reminder, Okamoto continues to advocate for change, from speaking at events like TEDxPortland, getting name dropped during Wendy Davis' 2016 DNC speech, or cold-emailing female legislators "just to talk."

But with so much she still hopes to do, Okamoto has to remind herself of those moments before — where she sacrificed her own health by escaping through a hyper-focus on others'. It's a balance a little easier struck now that she's seen her potential when fully present, both mentally and physically. It's why she's so passionate about giving the same to all women; it's how she knows that when period health isn't a hurdle, a distraction, or an unfair, unnecessary liability, all women have potential. And that's all it takes.

So, the best advice Okamoto's ever been given? "Take care of yourself," she says, "because you'll come back stronger."

More like this
Michigan’s Governor Is “Going To Fight Like Hell” To Protect Abortion Access
By Andrea Zelinski
How The City Healed Five Years On From The Manchester Arena Attack
By Ella Glover
40 Cheap, Comfy Things That Make You Look Good Without Trying Hard
By Nicole Zane
I'm Going Off My Bipolar Meds to Try to Get Pregnant
By Anonymous, as told to Anna Goldfarb
Get Even More From Bustle — Sign Up For The Newsletter