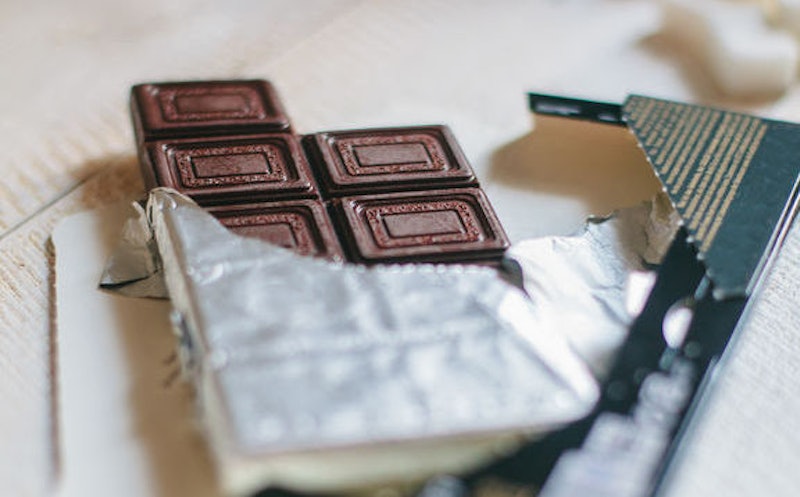 I don't want to rain on your post-holiday parade, but the world may be running out of chocolate — seriously. Disease and crop failure has caused cacao cultivation to decrease recently, meaning a general chocolate shortage might soon be upon us. However, the solution to the global chocolate shortage might be as simple as just switching one key ingredient to the confectionary, according to some British scientists. So perhaps we don't have to panic just yet.

According to the Telegraph, researchers in the UK (the original home of Cadbury) believe they've discovered a potential solution to the world's chocolate crisis. Apparently, it's all in the butter: Scientists at Bangor University in Wales have advised changing the common chocolate ingredient list to include mango butter instead of the highly sought-after cocoa butter. This is because both butters share similar physical, chemical, and thermal properties, the Telegraph reports — and of course, this means the taste won't be compromised too much.

Sayma Akhter, senior author of a research paper from Bangor University published in Scientific Reports, said: “Wild mango is one of the so-called ‘Cinderella’ species whose real potential is unrealized. The identification of real added value as we have shown in this study could pluck it from obscurity into mainstream production. With the support of government and non-governmental organizations, small scale industries could be set up to create a new income source for local people."

According to a press release from the University, wild mangoes suited for the production of chocolate are readily available in South East Asia. Creating income for local farmers in this area and saving the chocolate production market in the process admittedly sounds like a win-win situation for all involved. But as most cacao production takes place in Africa and Central and Latin America, it remains to be seen how these supply chains could merge. For example, a recent report from Reuters on the African chocolate industry revealed that countries such as the Ivory Coast and Ghana lack reliable dairy sources for their chocolate product; this means that they don't have a competitive advantage when it comes to exporting their bars. Additionally, production costs are pushed up by having to import butters. This is one aspect of the industry Bangor's research has not addressed.

However, it's worth noting that health-wise, Bangor's research shows that mango butter could be an even better alternative to cocoa butter, as it is higher in moisture. This is great because high moisture butters help produce confectionary products which are overall lower in fat. Furthermore, as the price of cocoa butter is one of the highest among all tropical fats and oils (the price of cocoa butter more than doubled between 2005 and 2015), replacing it with that of the mango could mean the price of my multi-pack milk chocolate buttons drops dramatically.