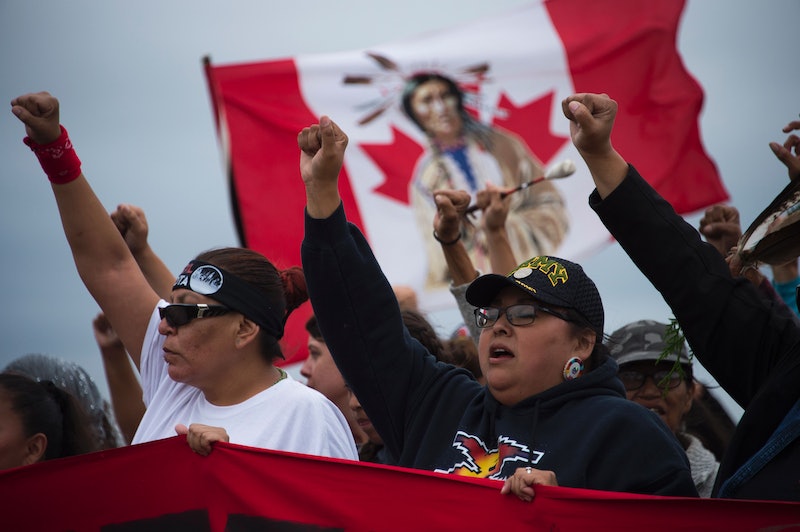 In a scenario reminiscent of the Keystone XL Pipeline debacle of 2014, the world watched as members of the Standing Rock Sioux Tribe protested the Dakota Access pipeline, a 1,168-mile crude oil pipeline that would travel across four states — and through religiously significant tribal lands. Although the pipeline has been on track since June 2014, it only made news in August 2016 as protests in North Dakota ramped up, informing people around the country about the tribe's religious, economic, and environmental concerns. This information has ushered in an outpouring of non-Native solidarity with the Standing Rock Sioux in unprecedented and amazing ways.

Although the pipeline was publicly opposed by the likes of Leonardo DiCaprio, Shailene Woodley, Bernie Sanders, Rosario Dawson, and others long before it became a source of national news, the protests and the news coverage surrounding them have increased significantly after the final permits needed to start construction on the pipeline were issued in July.

Although some coverage has been centered on the alleged violence of the protests (including reports that allege guards used attack dogs and pepper spray on protesters), a trend has emerged that's heartening no matter one's stance on the issue: the Standing Rock Sioux's plight has seen the largest instance of non-Native people standing in solidarity with Native Americans to protect their lands and their rights in recent memory, if not in American history.

The wide-ranging list of organizations supporting the Standing Rock Sioux in their quest to put a stop to the Dakota Access pipeline reads like a who's-who of progressive causes: organizations such as Black Lives Matter, the National Lawyers Guild (a human rights law association), the Sierra Club, and many others have publicly expressed their solidarity with the tribe, and social media posts in support of the protests have been shared thousands of times.

This country's appalling history of mistreatment of Native Americans and their lands both predicates this historic national protest and makes it all the more unprecedented. Seeing so many non-Native people not only take interest in but also "answer the call" of the Standing Rock Sioux to help stop this pipeline that will threaten their history and their water is incredibly heartening. This protest seems to point towards a shifting consciousness, in which members of disparate identity groups (many of whom are oppressed in different ways) ally themselves with each other.

As in 2014, when protesters in Palestine offered support to protesters in Ferguson, MO following the police shooting of Michael Brown, the movement aimed at ending the Dakota Access pipeline on the behalf of the Standing Rock Sioux highlights the ways our shared humanity overrules business interests. While people from many different walks of life tell the world that they #StandWithStandingRock, they're also telling the world that ethnic, religious, racial, and class divides might not divide us for that much longer.