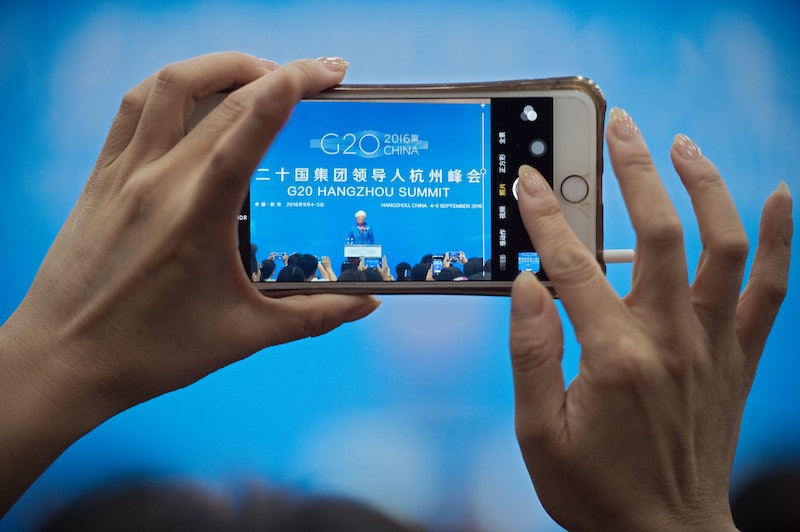 Apple released the latest version of the iPhone, the iPhone 7, during its product launch on Sept. 7. It may not seem all that different from the predecessor, but there are some key differences that will affect the user experience, especially if you want to use older accessories that you've grown fond of, or invested a significant chunk of change in. Specifically, Apple's new iPhone 7 will not have the traditional headphone jack, so if you're wondering if you can use your old headphones with the new iPhone 7, the answer is yes — but things will feel (and look) a little different.

The only port left is the lightning port, which has historically been used to charge and connect the iPhone to bigger accessories. Now, using a special new adapter that was unveiled Wednesday along with the iPhone, you can plug your own headphones into the adapter and listen in that way. Even better: If your headphones are Bluetooth and connect wirelessly to your phone, they should continue to work seamlessly.

This has been a matter of speculation for months. MacRumors, an Apple blog that works to publish info about new Apple products before they're released, explained the new set-up and its benefits ahead of the company's official announcement at their product launch. Getting rid of the jack will allow the phone to be thinner and leave space for other vital opponents, as Phil Schiller detailed at the event. And the best part is that lightning-port headphones, the can actually provide for better sound quality.

All in all there will be plenty of ways to listen to music on your new iPhone. CNET rounded up seven options that you will have if you don't want to go with the standard solution Apple offered at the iPhone 7 announcement — the company's new AirPods, which are wireless headphones perfect for the iPhone 7. Among the other options are headphone adapters that will change the 3.5mm plug into a lightning plug, but don't forget that you can send music from your phone to speakers that are connected to an Apple TV or Airport Express.

Some, of course, are not happy with the change. Remember when Apple switched from the larger charging cable to the current lightning cable? The backlash this time has been similar. David Wheeler wrote for CNN that Apple should reconsider.

Like most normal people, I use my headphones with my iPhone every day. Sometimes they're Apple brand headphones; sometimes the absurdly large, old-school, 1970s-record-producer-style headphones. I use them to take phone calls in stereo, to drown out the sound of car horns and cappuccino machines, to give myself a luxurious listening experience.

But you shouldn't worry, and neither should Wheeler. These iPhone updates are an exciting announcement for the company and its loyal users, and people will likely get used to the new changes in no time.