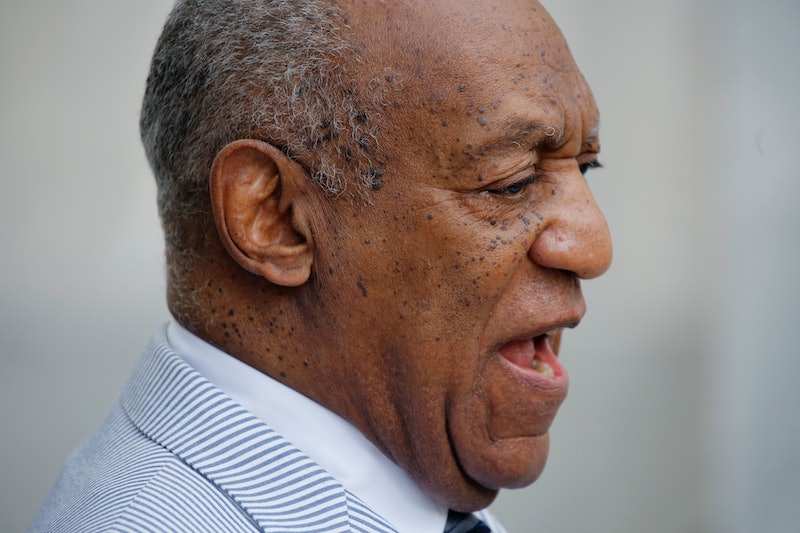 Bill Cosby's pretrial hearing on Sept. 6 finally set the wheels in motion for two pertinent aspects of the case: a trial date, and testimony from his alleged victims. The Montgomery County District Attorney ruled that 13 additional women will be allowed to testify on the stand when the trial begins, set for a tentative June 2017 date. These women will be able to provide testimony of a "pertinent trait," aimed at showing a pattern of Cosby's destructive behavior. Though this may be some of the alleged victims' first time speaking out in public, the cast of The Cosby Show — where the disgraced actor first positioned himself as America's moral compass — has had plenty to say regarding the sexual assault and rape allegations.

While allegations have been circulating for years, most of The Cosby Show cast chose to not speak out until the summer of 2015. It was in July of last year that a federal judge unsealed a deposition Cosby gave regarding Andrea Constand's 2005 sexual assault case against him. In the deposition, Cosby admitted to giving the sedative Quaaludes to women he wanted to have sex with. Constand's allegations are the basis for Cosby's most recent appearances in court, and the deposition is expected to play a role in the upcoming trial.

Based on their statements, much the Cosby cast seems to fall into one of two camps: they see Cosby as a mentor and want to preserve the show's legacy; or, in the case of one cast member, view him as outright guilty.

According to a 2015 report by HLN, actors Phylicia Rashad, Malcolm-Jamal Warner, Keisha Knight Pulliam, and Raven-Symoné have all defended Cosby. Their sentiments all rely on the same premise: preserving the show's legacy, which provided a positive image of black American life throughout the '80s and '90s.

Rashad, Cosby's on-screen wife, told ABC News of the allegations: "This is about the obliteration of a legacy." She had previously been misquoted as saying "forget these women," but later qualified that it wasn't about them, but rather the potential end of the show's legacy.

Warner, who played Cosby's son on the show, lamented having to watch "his friend and mentor go through this" in a Billboard interview. He also spoke of the show's legacy, saying "The Bill Cosby I know has been great to me and great for a lot of people. What he's done for comedy and television has been legendary and history-making. What he's done for the black community and education has been invaluable. That's the Bill Cosby I know."

Cosby's youngest on-screen daughter, Pulliam, also echoed these statements in an interview with The Grio: "You can't take back the impact that it's had on generations of kids, and it's continuing to have such a positive impact on them..."

Lisa Bonet, another of Cosby's onscreen daughters on the show, has largely stayed silent on the matter. The View host Raven-Symoné, known for her characteristically outgoing nature, hasn't had much to say either. She told The View audiences: "I don't really like to talk about it that much because he's the reason I'm on this panel in the first place. He gave me my first job."

Joseph C. Phillips, who played the husband of one of Cosby's on-screen daughters, was the only one to take a firmly negative stance on the allegations. In a post to his blog titled "Of Course Bill Cosby Is Guilty," Phillips gave a behind-the-scenes account of the show that painted the star as a man who slept around, something the fellow actors knew but ignored.

He explained: "Bill sleeping around was a fact that, like, the air, seemed to just be. You didn't have to see it or hear it to know that it existed. ... here was also the seeming unending parade of pretty young women that streamed through the studio."

Phillips also recounted an incident in which a female friend confided in him that she, too, had been sexually assaulted by Cosby. The actor believes her story. But not willing to let go of the show's legacy just yet, Phillips ended his post with this plea to Cosby: "Please, go live a quiet country life. Allow those of us who truly love you to preserve just a bit of our enchantment."

In the wake of the upcoming trial, it will be interesting to see any of the other actors speak out, or change their position entirely.

More like this
How The City Healed Five Years On From The Manchester Arena Attack
By Ella Glover
How To Fight For Reproductive Rights, Based On How Much Time You Have
By Courtney Young
Spice Girls’ Net Worth: The Richest Member Is Wealthier Than The Rest Combined
By Hugh McIntyre
'Unforgotten's Brand New Character Joins At A Pivotal Moment For S5
By Bustle UK
Get Even More From Bustle — Sign Up For The Newsletter