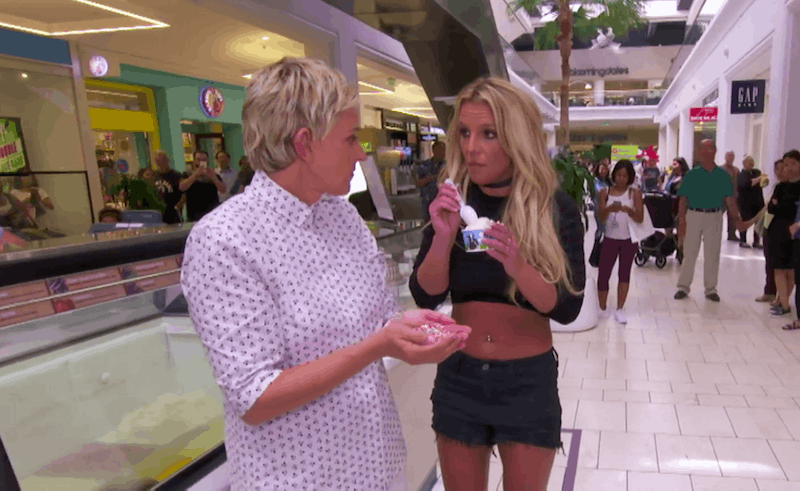 Imagine you were famous. Nope, even more famous than that. You sell out stadiums. Justin Timberlake was one of your first boyfriends. You did a residency in Las Vegas, just for the hell of it. This is the sort of mega famousness that we get to see working its effect on non-famouses in the wild when Britney Spears and Ellen DeGeneres went shopping together in a mall and caused havoc. Egged on by DeGeneres, the pair did all the things that they could get away with as celebrities: they stole a suit jacket, got a Ben & Jerry's vendor to dump sprinkles directly into their hands (#goals), and they asked a woman to scoop up spare change from the wishing fountain for them.

You guys, this video is seven minutes of sheer delight and raises the important question: why don't more celebrities have fun being famous? We live in an era in which celebrities either use their celebrity for "good," via activism and charitable donations, or in which celebrities seem to suggest that being famous is difficult and tiring. Both of the above reactions are totally legit — it's great that celebrities feel inspired to do something good with their power, and I'm sure the constant scrutiny of a person's every action could be exhausting. But can't it be fun, too?

According to this video: Yes, a thousand times, yes. The joy of the clip is that DeGeneres and Spears are using their fame exactly how someone who was newly mega-famous might use it: to circumvent the usual rules and expectations of life and to seriously upgrade your usual shopping experience. It suggests you can do all the things you're not allowed to do, like constructing a punching bag in the middle of the mall and set to it, because "We're celebrities! We're angry!" or stealing ice cream and then taking a nap in one of those super-luxurious display beds, knowing that you wouldn't get a stern talking to by the store manager because, guess what, you're famous.

I like this. It's not fair for us to expect celebrities to be simultaneously relatable and just like us and also perfectly well-behaved. You can't have it both way, non-famouses. Here's to more famous people acting out and actually just enjoying the crazy power that comes with celebrity, because wouldn't you want to? I do. So let's salute Spears and DeGeneres as trailblazers. When I finally get that multimillion dollar record deal, I'm going to look forward to handfuls and handfuls of sprinkles at the Ben & Jerry's stand for free.

More like this
Britney Spears Set A Wedding Date With Fiancé Sam Asghari & Previewed Her Dress
By Bustle Editors
What Is Jeanie Buss' Net Worth? The Lakers President Is Uber Rich
By Hugh McIntyre
Twitter Can’t Get Enough Of The WAGatha Christie Trial
By Nola Ojomu
Louis Theroux’s Rap Remix Just Hit A Major Milestone
By Sam Ramsden
Get Even More From Bustle — Sign Up For The Newsletter