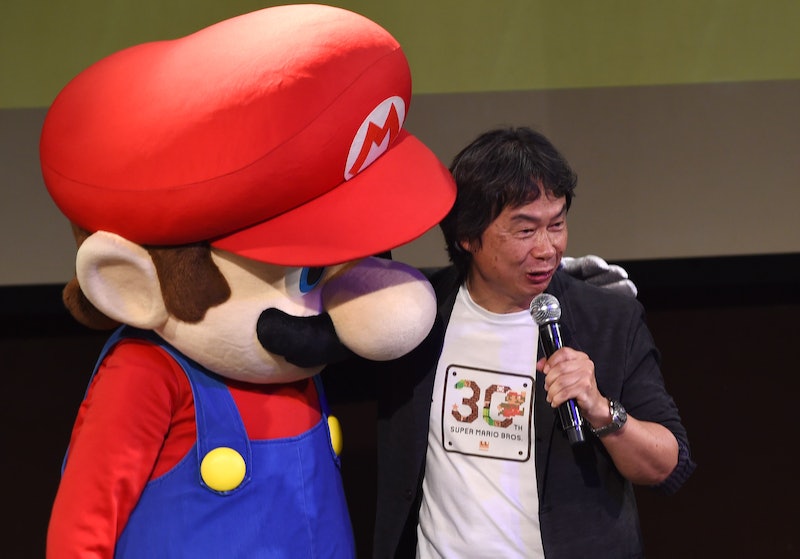 There was a lot going on at the Apple Keynote event on Wednesday. Carpool Karaoke? Pharrell? New Apple Watches? Details for the iPhone 7? So many fun surprises to talk about. But some of the exciting news came in the form of gaming. Apple CEO Tim Cook announced the addition of Super Mario Run to the App Store. The release of smartphone video games for Nintendo makes sense, especially given the wild success of Pokemon Go. They're likely hoping to bank on more of iPhone users' nostalgia to jump on the chance to revisit one of their favorite childhood games with Super Mario Run. It's a smart plan.

The game looks like it's based in the typical Mario vein: players run as Mario and jump and duck to avoid falling debris and various obstacles. A new battle mode called "Toad Rally" is a run addition that allows players to play against friends or even strangers, according to Gizmodo. While we still have to wait a few months for the game itself (it's expected to be available in time for the holidays and will be a set price for customers), for now we can settle for making jokes based on the original Nintendo experience. As expected, Twitter erupted with some great commentary.

And this NBC news writer asked the question we're all wondering.

Remember when Super Mario Kart stopped working on your Nintendo 64? The solution was to remove the cartridge and blow to clean it out, always. Let's hope that this isn't the case with the iPhone version.

Another user noted that we finally have a way to bring everyone together to support a cause.

In general, iPhone users showed that they have their priorities straight. That is, making space for the new game.

Despite the happy news, some of us may be spending this time regretting investing in Nintendo before it became so hot in 2016. With Pokemon Go and now Mario, the brand has earned some serious points with smartphone users.

In news that will surprise almost no one, Nintendo's stock rose 23 percent after the announcement of the Mario game. Overall, the addition of Super Mario Run to the iPhone is a fun, great announcement. It gives a new generation the chance to enjoy the game that was a major part of so many of our childhoods. And it gives Nintendo the chance to earn some more customers.

More like this
The 10 Best Waterproof Watches For Swimming
By Lauren Moison
Remember These Ancient Pieces Of '90s Tech?
By Lucia Peters and Emma Carey
Are Tom Daley & Louis Theroux Bound For 'Strictly'?
By El Hunt
Marcus Rashford Took Inspo From Kravis For His Adorable Proposal To Girlfriend Lucia Loi
By Frances Stewart
Get Even More From Bustle — Sign Up For The Newsletter