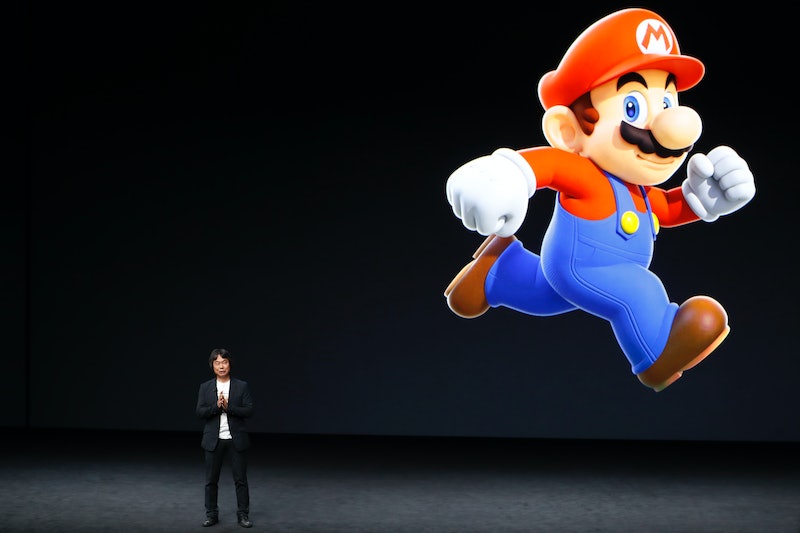 At Wednesday's Apple event, Nintendo video game designer and producer Shigeru Miyamoto announced that Super Mario will be coming to the iPhone. This is fantastic news for those nostalgic for the game but more accustomed these days to playing on their smartphones than on the old-school console. Not only can the new iOS game, Super Mario Run, be played in the familiar single-player mode, but it will feature an option to play against friends and even strangers in "battle mode." An official release date has not been announced, but Super Mario Run will be available by the holiday season. Smartphone users are in a tizzy over the announcement, as shown by the Mushroom Kingdom jokes and tweets that erupted on Twitter.

In case you need a refresher, the Mushroom Kingdom is the domain of Princess Peach. The Kingdom is primarily occupied by toads and nearly everything, including the hills and clouds, has eyes. The evil force that is Bowser plagues the Kingdom with his constant kidnapping of the princess, while it's up to Mario to save the monarch. As if the Kingdom weren't plenty exciting already, the new Super Mario Run will allow players to customize their very own Kingdom. Check out some of their reactions below.

Some people are feeling this dude's duds:

This Tweeter used Donald Glover to express himself:

OK, so not everyone was so impressed with the announcement.

But it was mostly excitement and joy in the Twitter Kingdom.

This Tweeter apparently already found his own Mushroom Kingdom, and doesn't seem interested in customization.

Some are super into Super Mario Run's battle mode feature — arguably one of the coolest features of the updated game, aside from the whole Mushroom Kingdom customization thing:

And a shout-out to the ruler of the land, Princess Peach:

From excitement to apathy, from emphasis on certain features to general enthusiasm for a classic game coming to the iPhone, Tweeters made their reactions to the Super Mario Run announcement known on Twitter. They'll have plenty of time to dream of a customized Mushroom Kingdom, since it will be months before the game's release. It will certainly be a different experience than plugging into a TV set, plopping down on a bean bag chair, and smashing buttons on the old console. But smartphone users can hope that the new version retains their favorite features, allowing them to indulge in nostalgia on an updated platform.