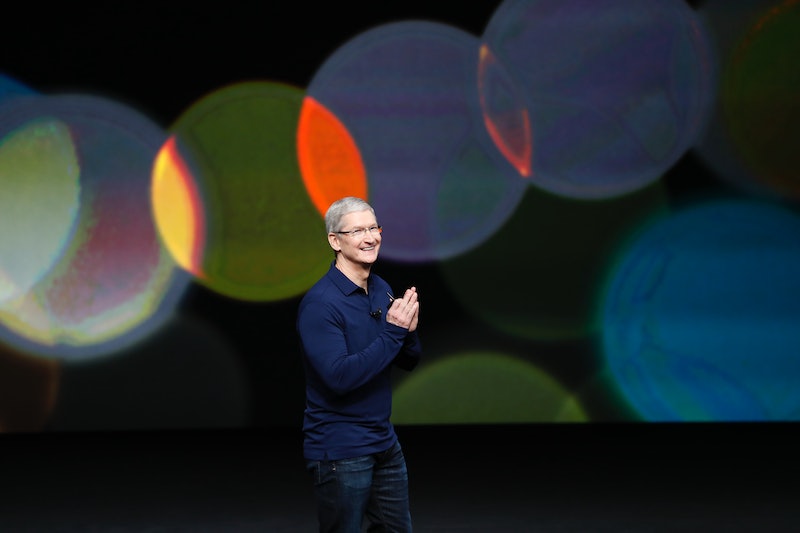 After weeks of speculation, Apple CEO Time Cook took the stage at San Francisco’s Bill Graham Civic Auditorium on Wednesday to unveil his company's latest and greatest additions. Rumors had been building for weeks about what new features, apps, and changes would be revealed. One of the most buzzed-about queries regarding the new iPhone was whether it would lack a headphone jack and, instead, rely on wireless headphones for your favorite songs and podcasts. Cook's Wednesday announcements proved that rumor true, but there were also a number of unexpected surprises. Here are the new iPhone 7 features that will get you pumped.

While news that the latest iPhone would lack a headphone jack wasn't all that surprising, the change comes with a nice perk for those of us (okay, me) who suffer through a lot of dumb water-related accidents with our iPhones — like dropping them in toilets, spilling soda on them, forgetting it's in your sorts when you jump into a pool, etc. The iPhone7 will be water-resistant. According to the New York Times report, "the removal of the iPhone’s headphone jack, which will enable the device to become water-resistant." By the way, the newest Apple Watch will also be waterproof.

2. Get Your Mario On

I'm going to guess that you've spent far more of your summer than you care to admit playing Pokemon Go on your iPhone. Pokemon Go has been downloaded more than 500 million times, according to CEO of Niantic John Hanke. Now, get ready to relive another childhood favorite on your iPhone and become even more addicted. It was announced Wednesday that Nintendo's Super Mario will be coming to the iTunes Store in December. The game, Super Mario Run, will not be available in 100 countries and nine different languages, Nintendo said in a press release. Here's the catch: according to Nintendo, only “a portion” of the game will be free and then there will be a "set price."

Although it had been previously announced, Nintendo confirmed in a press release on Wednesday that two other series, Fire Emblem and Animal Crossing, would have mobile versions by March 2016.

4. So Long To The Home Button As We Know It

There's another big change to the iPhone 7: no mechanical home button. Instead, there will be "a static version that's force sensitive," wrote James Vincent at The Verge. Vincent also noted that unlike the current "button that physically moves, the new home button will use Apple's Taptic Engine to click back at users."

5. Not One But Two Cameras

Apple has added a dual camera feature to the iPhone 7. The dual camera enables stronger zoom, meaning "you'll get higher quality shots from further away," as Mashable's Damon Beres wrote.

6. Better Pics Of Family, Friends, And (Admit It) Selfies

Beacause of that dual camera — and a "portrait" feauture software update set to "come later this year," according to Apple — the iPhone 7 and iPhone 7 Plus should enable user to take better pictures of faces. Beres noted that Portrait mode "will use machine learning to recognize faces in your photographs."

The latest iPhone 7 will be available in black and jet black. While that may not sound like much variation, there's a difference — and not just in appearance. While the black iPhone comes for all the new memory options, 32GB, 128GB, and 256GB, as Vincent at The Verge reported, you can only get jet black in the 128GB and 256GB versions.

8. Satisfying Your Need For Speed

The latest iPhones will have an A10 Fusion chip. The 64-bit quad-core processor means that the latest iPhones should run a solid 40 percent faster than the 6s chip does and twice as fast the iPhone 6's one.

9. Get Ready For Apple AirPods

Sure, you may be pretty bummed that your favorite headphones won't work with the iPhone7. But fear not — Apple has unveiled the AirPods, which are pretty much wireless earbuds. They sound pretty snazzy. Ashley Carman at The Verge wrote the AirPod "has dual accelerometers and optical sensors that help detect when they're in users' ears." Another neat thing about them that Carman noted, "Removing them will pause the music." Of course, it comes at a price — $159 a pair.

11. Pump Up The Jams With Stereo Speakers

The latest iPhone will come with two stereo speakers, located at the top and the bottom of the phone. Philip Schiller, Apple’s senior vice president of Worldwide Marketing, said in a press release that the iPhone 7's "entirely new stereo speaker system provides twice the sound."

All in all, there is plenty to be pumped about with this latest iPhone.