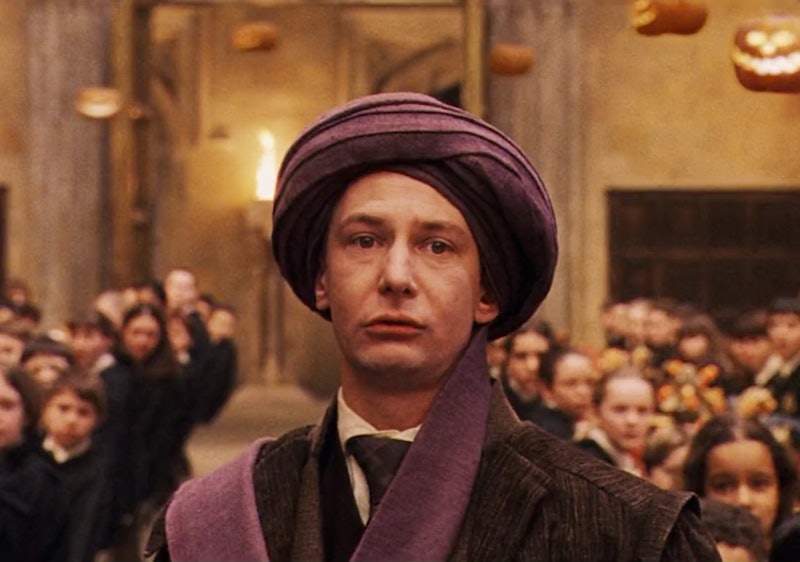 I don’t know about you, but I’ve never really wondered too much about what happened to Professor Quirrell in Harry Potter and the Sorcerer's Stone — the first title in JK Rowling’s bestselling fantasy series. I pretty much took it for granted that someone whose body was being taken over by an evil, parasitic, disembodied wizard would just naturally be a little low on energy. I know I would be, given the circumstances. But as it turns out, there was a tad more going on with Professor Quirrell than any of us readers knew, at least by wizarding standards — and Rowling lays it all out for you in her new e-book, Short Stories from Hogwarts of Power, Politics and Pesky Poltergeists .

As the second title of three-book e-book series Pottermore Presents , released on September 6, Short Stories from Hogwarts of Power, Politics and Pesky Poltergeists reveals all there is to know about the dark side of the wizarding world — the less-than-upright politics behind the Ministry of Magic; the history of the infamous, island prison of Azkaban; and all the dirty details from the lives of some of the wizarding world’s most notorious villains. Including the one-and-only poor, quivering Professor Quirrell.

Rowling derived her inspiration for Professor Quirrell from a few places: a Roman God named Quirinus who is often associated with war, the alliterative parallels to the word “squirrel” (aka: small, trembling, relatively harmless), as well as the suggestion of the word “quiver” — which Professor Quirrell does manage to do a lot of during his time at Hogwarts. She imagined Quirrell as a bright but meek boy, debilitated by nervousness during his own schooldays, who alleviated his own unpopularity by feigning an interest in the dark arts — an interest that became increasingly more authentic as he grew into adulthood. (This is why it’s important to join an afterschool group, boys and girls.)

But what did really happen to Professor Quirrell once Voldemort discovered him? Other than the whole invasion-of-the-back-of-his-head thing? As it turns out, Voldemort turned Quirrell into a Horcrux, of sorts — a fact none of us readers could have known way back in the days of Harry Potter and the Sorcerer's Stone. Horcruxes — an object in which a dark wizard or witch conceals a portion of their soul in order to ensure their immortality, even in the event of the destruction of their body — weren’t introduced (at least specifically by name) until Harry Potter and the Half-Blood Prince. So, although we readers didn’t know what exactly we were dealing with at the time, Professor Quirrell is the first horcrux of the Harry Potter series — as well as the first horcrux to be destroyed. If only we’d understood how significant that really was back in book one.

The other two titles in the Pottermore Presents series are Short Stories from Hogwarts of Heroism, Hardship and Dangerous Hobbies, which shares the backstories of some of your favorite Hogwarts heroes, and Hogwarts: An Incomplete and Unreliable Guide, which, as the title suggests, is a guide to everything you still haven’t learned yet about Hogwarts — as if there could ever be an end to the mysteries that Hogwarts holds.

More like this
Alan Rickman's Diary Reveals Why He Considered Leaving 'Harry Potter'
By Darshita Goyal
'The Midnight Club' TV Series Differs From The Book, But Readers Will Still Love It
By K.W. Colyard
The Most Anticipated Books Of October 2022
By K.W. Colyard
10 New Must-Read Books Out This Week
By K.W. Colyard
Get Even More From Bustle — Sign Up For The Newsletter