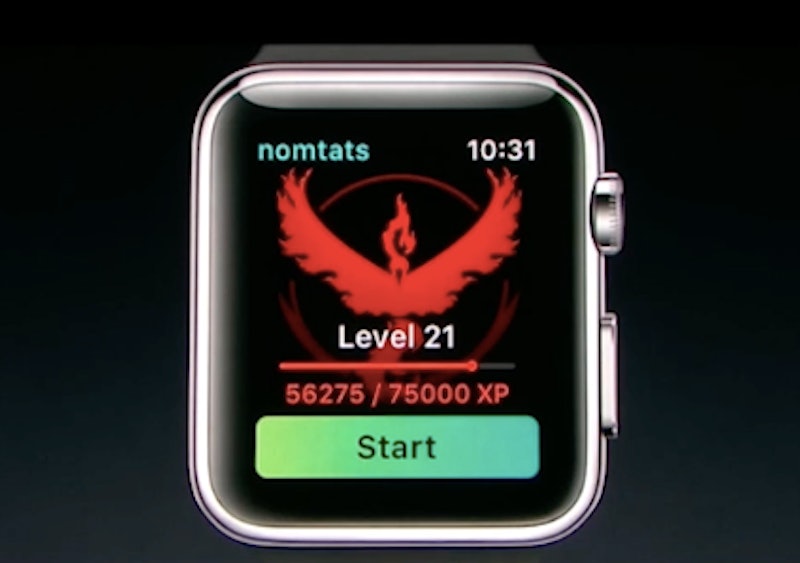 As a passionate player of "Pokemon Go" I have walked into quite a few walls (and fire hydrants, and potholes, and street signs) in my quest to catch 'em all. Now there is a new way to play without being glued to your phone screen — the popular game will be partnering with Apple Watch. So just how is "Pokemon Go" for Apple Watch different than "Pokemon Go" Plus? Since plans for the "Pokemon Go" Plus accessory were announced at the height of the Poke-craze, and pre-orders quickly sold-out, I have been counting down the seconds until its shipping date. Unfortunately, the release of the Pokeball-shaped device that would allow for phone-free gameplay was delayed from July to September, and there is still no word on when we will get our hands on it (although Niantic confirmed Sept. 7 that it is still definitely in the works).

While Nintendo's bluetooth-connective device is still listed on the "Pokemon Go" website, the post is devoid of specifics. There is no purchase information or dates, and on Amazon lists it as "unavailable." Perhaps the first difference between "Pokemon Go" Plus and the watch-specific "Pokemon Go" is that we have more of a time frame on the Apple version. Apple announced during their Special Event held on Sept. 7 that a "Pokemon Go" watch-version released exclusively on Apple Watch (and Apple Watch 2!) will be available "later this month." No pricing for the game has been mentioned as of yet, though we know that the "Pokemon Go" Plus device sold for approximately $35.

With "Pokemon Go" for Apple Watch I no longer have to constantly look at my phone to rack up those sweet XPs, and that's incredibly exciting. You can watch the entire product presentation here:

Another main difference between the two "Pokemon Go" products is while "Pokemon Go" Plus acts purely as a hands-free alert system, the Apple Watch-version uses the game as an exercise initiative. The watch keeps track of the player's distance, calories burned, and amount of time spent active within the app.

Both games alert the player when they pass a Pokestop or cross paths with a wild Pokemon. The "Pokemon Go" Plus device is limited to a blinking LED and vibrations as notifications, while the touch screen of the Apple Watch brings you a better approximation of the original smartphone game (without camera or map, of course). The watch face displays game graphics and keeps the player up-to-date on the Pokemon nearby without them ever having to take out their phone. Unlike those using "Pokemon Go" Plus, Apple Watch players do not do not have to keep the game simultaneously running on their iPhones. This is good news for egg hatching and your phone's battery life.

When a trainer approaches a Pokemon, those playing through the Apple Watch will need to take out their iPhones and load the game in order to catch the desired 'mon (but if it's a Pidgey, they can continue walking). "Pokemon Go" Plus allows the player to throw Pokeballs and catch Pokemon by clicking the center button on the device. However, if the Pokemon they are attempting to catch is not already a member of their Pokedex, they will need to open the game on their phone to catch it — so get that Ultraball ready!

The "Pokemon Go" Plus device allows players to collect items from a Pokestop with two clicks of the central button. However, the player has no idea what items are being added to their backpack with each passing PokeStop. With the Apple Watch, the process is far more interactive. When approaching a PokeStop, according to the Apple Watch presentation "a tap on your wrist lets you know" about the landmark. Whether this "tap" is similar to the vibration alert that the "Pokemon Go" Plus device offers is still unclear. An image of the Pokestop appears on the watch screen and the player can scroll down to view a description of it (just like on the phone app). Swipe on the image and the player collects the items and experience points, which will appear in a listed on the screen.

With the Apple Watch-version players are notified when they earn a medal or level up. They can also watch an animation of their hard-earned eggs hatching on their watch screen — no phone needed. When players are ready to stop for the day, they can elect to end their game and check out a summary of activity and items collected on their walk. The subtlety of the Apple Watch may also be seen as a benefit to some adult Pokemon trainers who would rather remain anonymous while hunting that Snorlax. Wearing a Pokeball-shaped clip-on may not be everyone's cup of tea.

Though neither device completely eliminates the need for the game on the phone, the Apple Watch offers a closer approximation to the original game than "Pokemon Go" Plus — without the bumping into street signs.