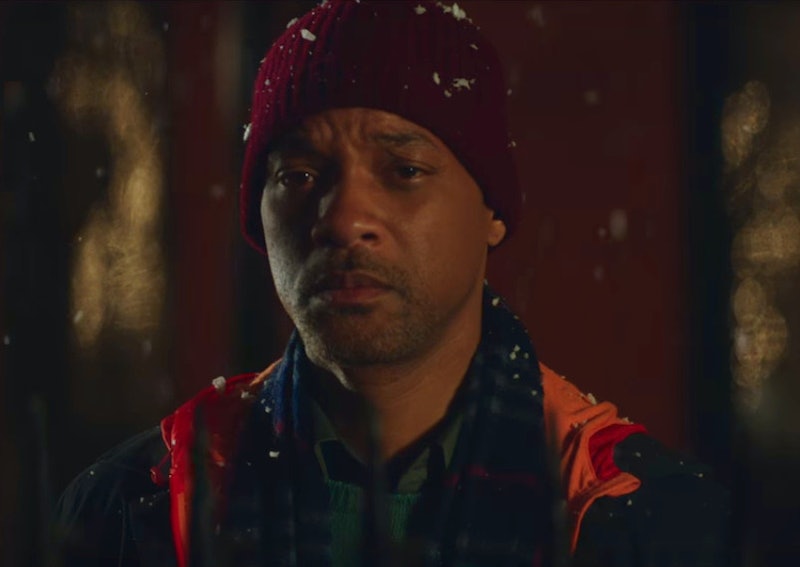 Let's be real about this: Christmas is easily one of the best times of the year. It's a time that's often full of fun, parties, old friends, new friends, great love, and family. But all of that joyfulness can also make it one of the toughest times of the year, too. For anyone struggling with heartbreak, tragedy, troubles or bereavement, the holiday season can make personal loss or hardship feel even more heightened and harsh. With that in mind, it's comforting to see that there may be a film released this Christmas which not only understands, but translates those feelings on-screen: The first trailer for Collateral Beauty was released on Wednesday, and it totally looks like it could be the most grown-up, emotional Christmas film of 2016.

Judging by the trailer, the film follows Howard (played by the indomitable Will Smith), a man who loses his love and drive for life following the death of his daughter. Additionally, it seems to focus on three things that are universal to all humans: Love, time, and death. As Howard divulges in the trailer, "We long for love, we wish we had more time, and we fear death." Like, I have chills already. As a means of dealing with his daughter's death, Howard spends his time writing letters — not to people, but to love, time, and death — only to have these personifications come to life to try and persuade him to "live again."

With Christmas Carol vibes so strong that the film could easily suck the "Bah, Humbugs" from the mouths of Ebenezer Scrooges everywhere, Collateral Beauty looks like it could easily be a strong, modern-day equivalent to the classic tale. However, whereas in the classic Charles Dickens story Scrooge was visited by the ghosts of his own savage misdeeds against humanity, Collateral Beauty looks more as though its lead character is instead haunted by life's savage misdeeds. And, let's face it, not only is that far more relatable, but it's also a film that people need at Christmas.

After all, Christmas is a major time for reflection. It can offer piercing reminders of better times, or of loved ones who are no longer around — and sometimes it can offer stifling and morbid blows just as it does joy and celebrations. Love, time, and death are all things that are relevant at Christmas. We celebrate love, we choose to share the holidays with people that we feel deserve it in some way, and we pay our respects to those who are missing from the family get-togethers.

But the holiday season can also feel insufferable to those who, for whatever reason, are blighted by or missing any of these three things in some way. And sometimes that can force individuals to isolate themselves, or gloss over their feelings in order to better cope with the festive commitments that Christmas can bring.

And it shouldn't be that way. Based off this trailer, what Collateral Beauty appears to be proposing is the idea that acknowledging and embracing personal feelings — no matter how painful they may be — is a true gift of life. Being able to stare death, time, and the pain love brings in the face is a way of celebrating the life and love that exists in you currently in a way that isn't a waste of time or of life itself.

As George Bailey discovered in the classic Christmas movie, It's A Wonderful Life: There's no bigger Christmas gift that a person can enjoy than the capability of being able to value every aspect of their life, impact on, and place in the world. No matter how hurtful or challenging that life may feel to live. And so, though I'll still be watching the spiritedly fun of Elf and Home Alone on repeat like I do every Christmas, I'll be beyond happy to go and see a film at the cinema which might feel a little more balanced and a whole lot more emotional than your average festive film can offer. I'll have my tissues ready and waiting, you guys. So, let's do this.

More like this
Jennifer Lopez Found The Perfect Ben Affleck Throwback Video For Mother’s Day
By Stephanie Topacio Long
Ryan Reynolds’ Mom Hilariously Tests His Patience In A Mother’s Day Video
By Brad Witter
What Does Doctor Strange’s Third Eye Mean?
By Arya Roshanian
What’s New On Netflix: A Victoria Justice Rom-Com & The Return Of David Letterman
By Arya Roshanian
Get Even More From Bustle — Sign Up For The Newsletter