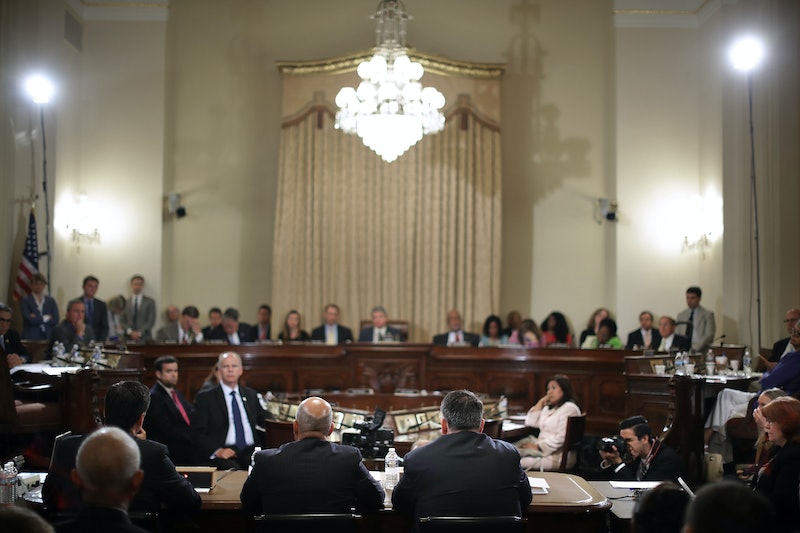 If Congress fails to pass spending legislation before Sept. 30, we'll witness another government shutdown, during which funding for federal programs, including the Centers for Disease Control, the Food and Drug Administration, and national parks, will not be available. Several Republicans in the Senate appear eager to prevent this, Politico reported, as they are proposing temporary funding legislation to approve spending through the beginning of December. But some of their colleagues in the House seem more concerned with using the opportunity to push through a partisan measure than with preventing a government shutdown. Members of the House Freedom Caucus are trying to include a bill in the temporary funding package that would pause the admittance of Syrian refugees into the United States until vetting provisions are strengthened.

It's not the first time the House Freedom Caucus has attempted to insert such a measure into a bill. In December 2015, they tried to pressure colleagues to include the refugee resettlement pause in the spending bill on the argument that the program provides too easy an entrance point for possible terrorists. The effort was unsuccessful then, and, with Senate Republican leaders pushing to get the stopgap legislation passed and prevent a government shutdown, the House Freedom Caucus members who began making their pitch to colleagues on Sept. 6 should probably not expect it to be successful this time around.

In the fall of 2015, the House passed a bill that would have strengthened the vetting process for refugees, but the Senate blocked it, indicating that, were such a provision included in the upcoming stopgap legislation, there's a good chance it wouldn't pass both houses of Congress, thereby leading to a shutdown.

The House Freedom Caucus' push is one of many manifestations of the tension between concern about the threat of terrorism to the United States and the immediate danger that the migrant population faces from those very terrorists. Because the current vetting process takes up to two years to complete, and, according to the White House, fewer than 1 percent of refugees even pass the first phase of it now, many are concerned that making the process even tougher will keep thousands of refugees in immediate grave danger. Throughout 2016, at least 10,000 refugees from Syria have been admitted into the United States, Politico reported.

The House Freedom Caucus doesn't have long to sway fellow Republican lawmakers in the Senate who are preparing to move quickly on temporary funding legislation. Whether they include the vetting bill will be a testament to whether their priority lies with keeping the government up and running or attempting to use the political pressure of the moment to deny access to refugees.