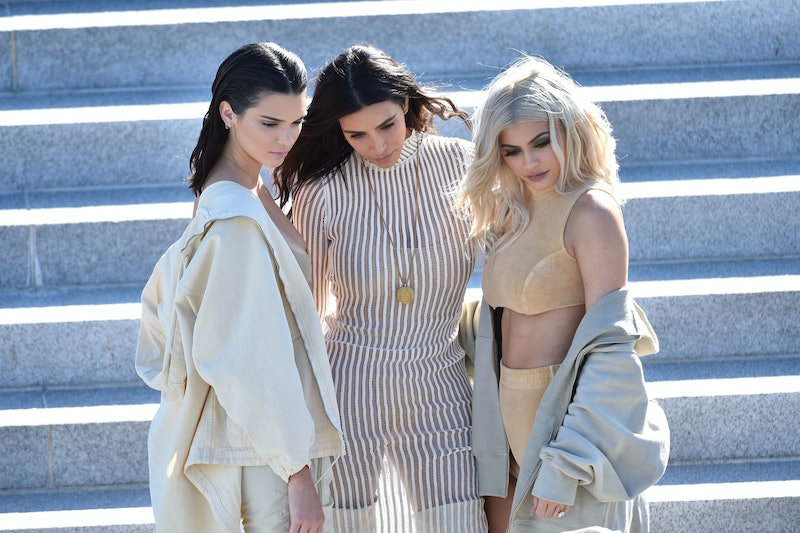 Kim Kardashian was obviously in attendance Wednesday afternoon as Kanye West debuted his latest collection, and her ensemble was so Yeezy that it couldn't have been any more perfect. In fact, Kim Kardashian's Yeezy Season 4 ensemble was the ideal blend of both her and her designer husband's styles. If I had to guess, the sheer dress and boot combo was definitely custom made just for Kim K.

At the show, Kardashian was joined by sisters Kylie and Kendall Jenner, and the three together were the epitome of squad goals if families can be squads that is. Like the Jenners, Kardashian rocked it in neutrals, and while each member of the family stuck to a style that was all their own, Kardashian's sheer, striped sweater dress and thigh high winter white boots were totally her. The neutral hue and fitted style of the dress is definitely a blend of Kardashian and West, and those over-the-knee boots are practically classic Kardashian at this point. I'd be surprised if she didn't own a pair in every single color.

So, even though Kardashian was at the Yeezy Season 4 premiere on Wednesday afternoon where a pared-down aesthetic was key and common in a West-created collection, she totally stayed true to her own sexy, sultry style while she was there. Kardashian sticking to her own style and blending in the Yeezy neutrals was totally fashion gold, and she killed at the show.

While it may be in the eighties (degrees-wise) in New York, that won't stop Kim from slaying in long sleeves.

At least it was all sheer, though, right?

Would you expect anything less than sheer from Kardashian? Wait, don't answer that.