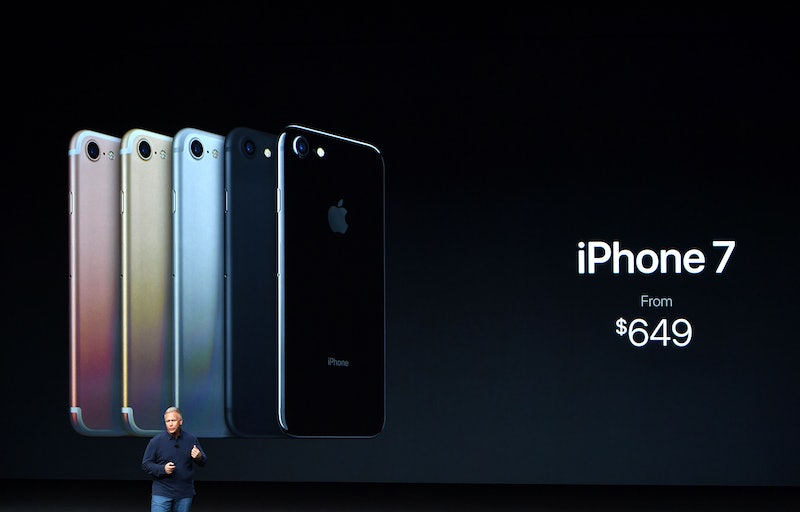 The new iPhone 7 was announced on Sept. 7 at the Apple product launch in San Francisco. The company unveiled a new smartphone model with a few, relatively minor design updates, increased storage capacity, and new colors. There are now two variations of the classic black iPhone, black and jet black. What is the difference between jet black and black? The two different colored phones are mostly the same, it's just a matter of preference.

There are two important ways that the colors are actually different, and one doesn't have anything to do with color at all. First, obviously the colors are slightly different in shade. The jet black model appears much shinier than the regular black version, as seen in the video of the event. The jet black's backing blends more seamlessly into the screen, which is definitely a chic aesthetic. The regular black is actually a matte black, which further distinguishes the two new colors.

There are also some practical considerations to be made when deciding between the two colors. According to Business Insider's tech guru Steve Kovach, the finish on the jet black shows fingerprints more easily than the regular black, and Apple has already admitted that it will scratch more easily, too. That won't matter much if you have a case on it, but it's something to keep in mind.

The other big difference between the two phones is that jet black will only be available in the two higher storage options, 128 and 256 gigabytes, meaning you'll have to pay a premium if you're set on getting your new phone in that color. Apple didn't specifically list pricing at the event for the higher end model, just the starting price of $659. According to Apple's website, the 128 and 256 gigabyte models will cost $749 and $849 respectively, as they did when the iPhone 6s was released last year.

The iPhone 7 will be available for pre-order on Sept. 9 and available in stores on Sept. 16. If you do intend to buy the new model, it's unlikely to disappoint — with all the latest technology and a new twist on functionality, the newest update could be closer than ever to becoming the best iPhone yet.

More like this
100 Clever Gifts Under $25 When You Have No Idea What To Get
By Maria Cassano
Using Your Pet’s Name As A Password? Here’s Why You Might Want To Change It
By Cristina Sanza
The 10 Best Waterproof Watches For Swimming
By Lauren Moison
Of All The Cheap Beauty Products Out There, Experts Say These Work The Best
By Dena Ogden
Get Even More From Bustle — Sign Up For The Newsletter