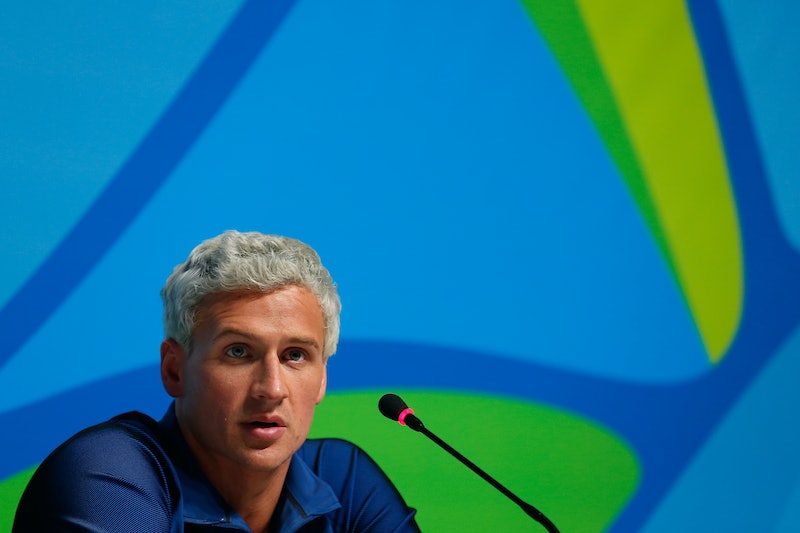 Nearly one month after his widely publicized debacle at the Rio Olympics, gold medalist Ryan Lochte has been officially suspended from swimming by the International Olympic Committee, United States Olympic Committee, and USA Swimming for the next 10 months. According to an unnamed source who spoke to USA Today, Lochte's punishment was more severe than those given to Gunnar Bentz, Jimmy Feigan, and Jack Conger, the other three U.S. Olympic swimmers who were involved in the incident.

The whole scandal began the day of August 14, when Fox Sports reporter Ben Way first tweeted the news that Lochte had been robbed at gunpoint. Although the IOC was quick to deny that the robbery had occurred, Lochte's mother spoke with USA Today to confirm the story. "They just took their wallets and basically that was it,” said Ileana Lochte. Ryan Lochte also confirmed the story himself to NBC's Billy Bush, which he later admitted he "embellished."

"And then the guy pulled out his gun, he cocked it, put it to my forehead and he said, 'Get down,' and I put my hands up, I was like 'whatever.' He took our money, he took my wallet — he left my cell phone, he left my credentials."

Lochte's whole version of events was turned on its head just two days later when Brazilian police first began publicly refuting Lochte's story. According to the authorities, the four swimmers, elated after a night of partying, the swimmers vandalized a gas station bathroom and subsequently fabricated the story about it to cover up their actions. On August 17th, a judge ordered that Lochte and Feigan's passports be seized to prevent them from leaving the country — however, Lochte had already arrived back in the U.S. by the time the court order was issued.

Lochte finally revealed the full, true timeline of that night during an interview with Matt Lauer on August 20th, during which he admitted that he was still drunk when he first told the story and attributing the exaggeration to alcohol.

Matt Lauer: "One of the things you appear to have embellished with Billy when you talked to Billy is you said at some point after you refused to sit down the security guard put the gun to your forehead and cocked it. That didn’t happen?

Ryan Lochte: "That didn’t happen. And that’s why I over-exaggerated that part."

Lochte will miss the 2017 World Championships next year as a result of the suspension, one of the biggest contests in the sport of swimming. His future in the sport is unclear, but for the meantime, he is still facing charges from the Brazilian authorities for falsely reporting a crime.

More like this
Jake Daniels Just Became The UK’s First Active Football Player To Come Out As Gay Since 1990
By Sam Ramsden
What Is Jeanie Buss' Net Worth? The Lakers President Is Uber Rich
By Hugh McIntyre
Rebekah Vardy & Coleen Rooney’s Trial Has Officially Begun
By Bustle UK
Britney Spears & Sam Asghari Announced Their “Devastating” Pregnancy Loss
By Stephanie Topacio Long
Get Even More From Bustle — Sign Up For The Newsletter