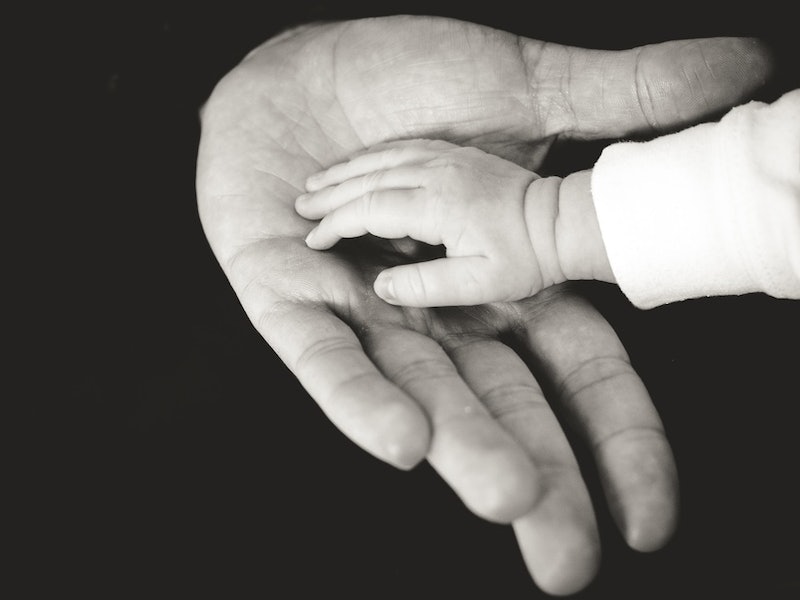 There is probably nothing sadder in the world than discussing stillborn babies. In technical terms, stillbirth is the term for a baby that dies in utero at 20 weeks gestation or more, including during birth; but keeping terms medical doesn't begin to touch the sides of the devastation of the experience for the family. Even more horribly, SANDS, the stillbirth and neonatal death charity, points out that in as many as a third of stillbirths, the cause of the baby's passing isn't clear. In some cases, the causes may be traced to slow growth, a genetic abnormality, infections, or damage to the umbilical cord or placenta; but in many others, the baby itself appears healthy and shows no evident problems, and that can be even more grieving to the parents. Luckily, a new medical discovery released this week might shed some light on those cases that previously had no clear explanation for the cause of stillbirth.

Providing an explanation in the context of stillbirth isn't just a medical matter; it's an emotional one. Stillbirths are often surrounded by trauma, grief and significant taboos; my grandmother had at least one stillborn boy, but it's not something that's ever talked about. And lack of understanding can make that worse; Elizabeth McCracken, whose first son was stillborn, reveals in her memoir An Exact Replica Of A Figment Of My Imagination that her son's unexplained death before his birth tormented her, as she wasn't sure if it was her fault or something she could have prevented.

Diagnosis isn't closure by any means, but in light of the new study about what causes stillbirths, grieving parents might have more insight into what went wrong. And, crucially, it could help new parents prevent stillbirth in the first place.

What The New Study Says

The study, published in September's issue of PLOS Pathogens, highlights a mechanism that hasn't been observed before: a particular bacteria that's very common in pregnant women turning unexpectedly lethal towards the fetus. The bacteria in question? A variety of Streptococcus, the bacteria that, in other forms, causes strep throat.

The one the scientists focussed on is called strep B, which hangs around in the vagina and bowel of pregnant women and is found in a high proportion of them: the Royal College of Obstetricians and Gynecologists estimate that about 20 percent of British pregnant women have it, while the Center for Disease Prevention and Control estimates that the number in America is about 25 percent. Conventional wisdom, up until now, has held that this isn't such a big deal (American women are habitually tested for strep B at around 35 weeks' gestation). But the scientists from the new study found that it's much more problematic than initially thought.

The strep B bacteria in the vagina aren't too worrisome, as long as they stay in the vagina and are treated so they don't pass on to the baby (more about this in a minute). But the new research reveals that strep B has a nasty tendency to produce "extracellular membrane vesicles," small, fluid-filled "orbs" that can travel up into the uterus. And when they get there, the orbs cause havoc, because they contain dangerous proteins that set off the deaths of cells and start to inflame and wear down the collagen in the amniotic sac, the pouch that protects the baby. The weaker the sac, the more vulnerable the pregnancy.

The results can be devastating: a huge majority of the pregnant mice in the study with these bacterial orbs in their uteri either delivered extremely early or gave birth to stillborn babies — Science News called the orbs "toxic balloons." It's not just about the sac, either; the scientists also found that fetuses growing in uteri with the "balloons" were more likely to be tiny and abnormal, significantly reducing the likelihood of their survival.

Can Anything Be Done To Prevent It?

The interesting thing is that we already knew that strep B was a threat to pregnant women, but not in terms of causing miscarriage: the current treatments for it in pregnant women are aimed at not passing the bacteria onto the newborn. Group B Strep Support, an organization aimed at raising awareness of the possibility of strep B infections in very young babies, explains that newborns are very vulnerable and that the bacteria can be life-threatening, causing sepsis or meningitis. In America, it's normal for pregnant women to be tested for strep B, but the American Pregnancy Association points out that they're only given antibiotics during labor itself, to try and minimize the risk of passing down the infection. This new research gives a positive strep B test during pregnancy a much more serious overtone. Medication in labor may come too late.

It's also been known before that strep B can cause premature labor, but we've never been very sure as to why. It turns out that the toxic balloons, in weakening and inflaming the amniotic sac, can cause its rupture (which is what "having your waters break" means) far earlier than it should. But strep B isn't usually aggressively treated in pregnant women, because the bacteria just regrow in 65 percent of cases before the baby's actually born. Now we know about the "balloon" issue, that might change.

If you're pregnant and know you have strep B, you need to raise this issue with your gynecologist immediately and discuss your treatment options. Fortunately, there are a few areas that could be hopeful: The scientists found that if they injected protease inhibitors, anti-viral medication that tends to be used for HIV/AIDS and works against dangerous proteins, into the pregnant mice, their amniotic sacs didn't degrade. And some of the damage to the sac could be repaired by applying collagenase, which helps collagen retain its stiffness. So all isn't lost.

The big next step for the scientists, though, is to stop women from having strep B in the first place. And there's amazing news on that front: in February of this year, a strep B vaccine for pregnant women passed its first clinical trials with flying colors. It'll be a few years before it gets FDA approval, but if all goes well, getting the vaccine early in pregnancy will mean eliminating the possibility of strep B ballooning and causing devastation. Medicine: it works, bitches.