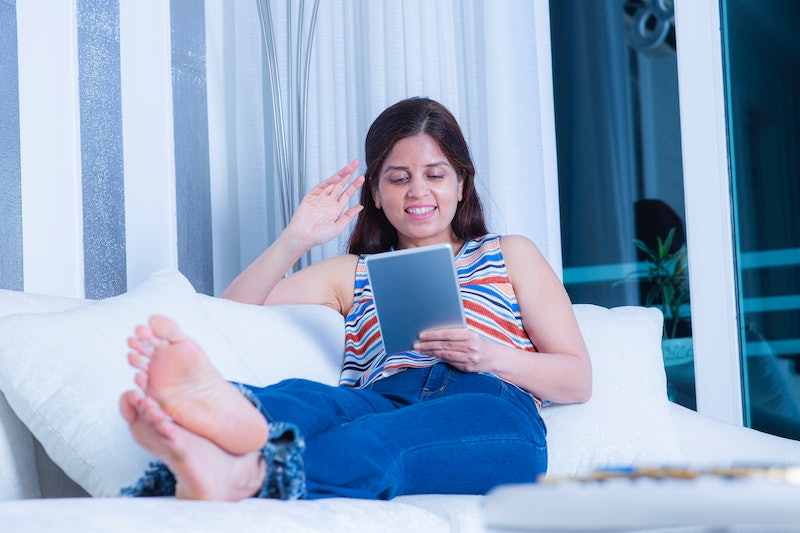 Contrary to popular belief, the life of an introvert isn't all quiet rooms, earphones and refusing to answering the phone. The issue for introverts is a matter of energy: as Dr. Jennifer Kahnweiler told Psych Central, "the introvert gets their energy from within, while the extrovert is charged up by people, places and stimuli outside of them," and consequently introverts become exhausted by social situations. Depending on their particular variety of stamina, many introverts can handle a large variety of social contexts, but after a while, their energy dries up and they need to go cuddle a dog and not talk to anybody for a while. And that's where the technology of the future might come in. In an ideal world, the modern introvert would have the kinds of inventions made just for them that would make the Jetsons wonder.

The ideas I've come up with here are a futurists's dream, involving technologies we haven't even dreamt of yet; but the modern world is increasingly introvert-friendly. A case in point is electronic check-outs at supermarkets, which reduce the need for social interaction (also a boon for those suffering from social anxiety). But that's just the tip of the iceberg: some experts believe social media and other bits of communication that don't require face-to-face interaction considerably lessen the energy burden on introverts, while a British designer has gone so far as to design "introji," emoji specifically for talking about introverted feelings. It's clear that the acceleration of tech discovery will, as a side effect or directly, provide possibilities for introverts.

If you're a budding tech genius, though, may I propose a few ideas?

The Lowdown: Made of artisanal, breathable felt, these isolation pods could, through new innovations in matter manipulation and nano-engineering, be secured in a normal-sized backpack along with several novels and a cupcake. On demand, it could expand in less than five seconds into a solid, soft hammock around the wearer with a small window, complete sound insulation, and built-in lighting. Models could be made to provide either a full-length sleeping situation or simply a padded globe around the user's head. Would be extremely popular in airports and in noisy shared living spaces.

The Lowdown: Thanks to new discoveries in the relation between social energy levels in introverts and neural activity in various brain regions, this monitor, worn handily on the wrist or around the neck, could demonstrate to concerned friends and family members when an introvert began to rapidly lose their capacity to deal with people. Available in digital or analogue form, it could display the level of social energy remaining as a portion of a pie chart, a percentage, or an increasingly insistent flashing light. (Early models with warning sirens would be phased out.) Once social energy levels reached dangerous levels, the device would send alerts to anybody in the near vicinity to rescue the afflicted introvert, put them in a quiet room to recharge, and leave them alone with some cake (not included).

The Lowdown: Available first specifically to tech employees at their annual company mixers, and then gradually allowed to spread beyond Silicon Valley to introverts nationwide, this service (operated from a gigantic service base somewhere underground in Utah) would allow a push-button, discreet removal from situations that were no longer socially viable. It would give a two-minute countdown in order to gently segue from any conversations, and then deposit the person neatly into their own bedroom. In original, upscale models, a hologram could be left behind to take part in conversations using an algorithm of set responses, but this would be removed from the market when consumer surveys revealed that other guests were kind of insulted.

Famously antisocial types would make headlines by teleporting suddenly from award shows, often while onstage after accepting an award. Ryan Gosling would mount a quiet disappearing act from the Vanity Fair Oscar party.

The Lowdown: In one of the world's first nationwide pet-GPS laws, it would become mandatory for all owners microchipping their new animal to sign them up to a locator database. Those indoors, like hamsters, could remain off the grid except to their owners (who could locate them if they crawled under the fridge); but others could be pinpointed as they roamed the streets, with descriptions about their friendliness, pet-to-growl ratio. and general likes and dislikes. An introvert in any given area could, with a few swipes, automatically find the nearest available animal for cuddles, and whether it would enjoy a scratch on the head or was likely to go for the throat.

Op-eds would contemplate the American pet's right to privacy, and worry about a potential spike in animal-napping in a GPS-focused world. Somebody, with true ingenuity, would get rich off a Pokemon Go crossover.

The Lowdown: Like Tripadvisor or Yelp, but specifically for the needs of people with distinct limits on their capacity to talk to people. Five stars for restaurants where waiters didn't indulge in unnecessary chit-chat; minus points for situations in which complaints to management required listening to a long recitation of the manager's personal problems. As it diversified, it would include workplaces, giving anonymous reviews about how many quiet spaces there were for a breather, whether co-workers were aggressively chatty, and how many water cooler discussions per week were deemed "socially acceptable" by the rest of the staff. Tech companies would be hits, as would libraries. Clubs would be abysmal. Cafes with surly, un-talkative staff would find themselves swamped with new quiet customers, and would grumble to themselves about it.

Restaurants, hoping to capture demand, would split off separate "introvert sections," with quieter waiters, less stimuli and smaller tables. Whether this was discrimination would become a legal hot-button issue. Hey, we can dream.

More like this
How To Use The Crying Filter On Snapchat, TikTok, Instagram & More
By Emma Carey
The True Meaning Behind Each Hand Emoji
By Bustle Editors and Emma Carey
Here's What The Face Emojis Actually Mean
By Bustle Editors
How To Protect Your Digital Privacy If You Need An Abortion Post Roe v. Wade
By Kaitlyn Wylde
Get Even More From Bustle — Sign Up For The Newsletter