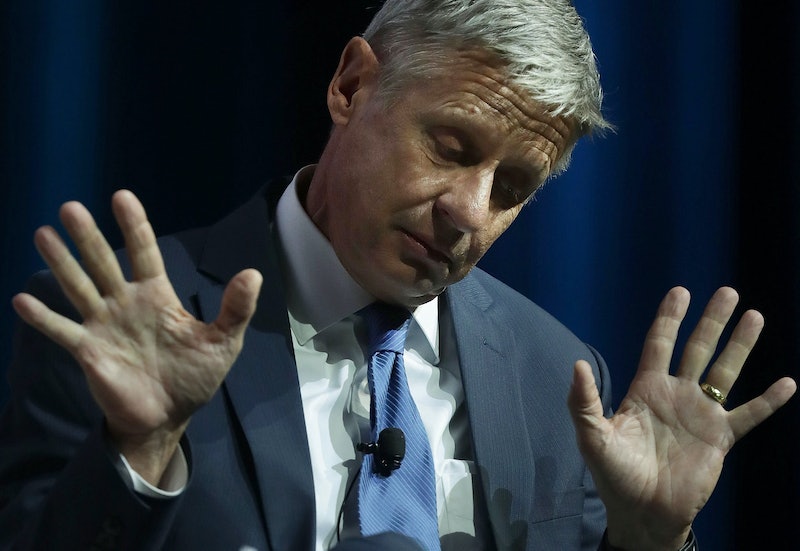 Libertarian presidential candidate Gary Johnson revealed he doesn't know what Aleppo is. During a Sept. 8 interview on Morning Joe, panelist Mike Barnicle asked Johnson what he would do about the Syrian city of Aleppo if he were to be elected president. "What is Aleppo?" Johnson responded, thus proving he's maybe not ready to be president if he doesn't know the city that is at the center of the Syrian civil war and refugee crisis.

Johnson has been polling well lately, most recently at 10 percent. The New York Times projected that Johnson could earn more votes than any other third-party candidate in 20 years, as long as his support keeps up. Moreover, an August Pew Research Center poll showed that over 70 percent of Johnson's supporters are younger than 50 years old and the majority identify as Independents. Although his supporters skew a bit younger than the 63-year-old presidential candidate, his Aleppo gaffe is likely not to go unnoticed nor dismissed.

Every interview counts for Johnson, especially as we get closer to the general election. It was surprising, to say the least, that Johnson didn't prepare for a question about the Syrian refugee crisis before his Morning Joe interview, especially for a fairly easy question from Barnicle: “What would you do, if you were elected, about Aleppo?” To which Johnson asked: "And what is Aleppo?"

Just two days before Johnson's Morning Joe interview, Syrian activists said that warplanes dropped chlorine bombs on the city of Aleppo, ABC News reported. Peter Maurer, the president of the International Committee of the Red Cross, has described the dire state of Aleppo and its constant state of crisis during the civil war:

No one and nowhere is safe. Shell-fire is constant, with houses, schools and hospitals all in the line of fire. People live in a state of fear. Children have been traumatized. The scale of the suffering is immense. For four years, the people of Aleppo have been devastated by brutal war, and it is only getting worse for them. This is beyond doubt one of the most devastating urban conflicts in modern times.

Referring to Aleppo as "one of the most devastating urban conflicts in modern times" should assuredly put it on anyone's radar, especially someone like Johnson who is running for president and would have to deal with foreign conflict if elected. Johnson said that Syria "is a mess" and was then asked to explain how he would handle the Syrian conflict as president:

I think the only way that we deal with Syria is to join hands with Russia to diplomatically bring that at an end but when we’ve aligned ourselves with — when we have supported the opposition, the Free Syrian Army, the Free Syrian Army is also coupled with the Islamists, and then the fact that we're also supporting the Kurds and this is, it's just a mess. And this is the result of regime change that we end up supporting and, inevitably, these regime changes have led to a less safe world.

Johnson assured Joe Scarborough that he does "understand Aleppo and I understand the crisis that is going on," but he clearly does not. The pressure of revealing to the world that he doesn't know what Aleppo is seemed to have taken a toll on the presidential candidate: he postponed an interview with the Brian Lehrer Show scheduled for just hours after his Morning Joe interview.