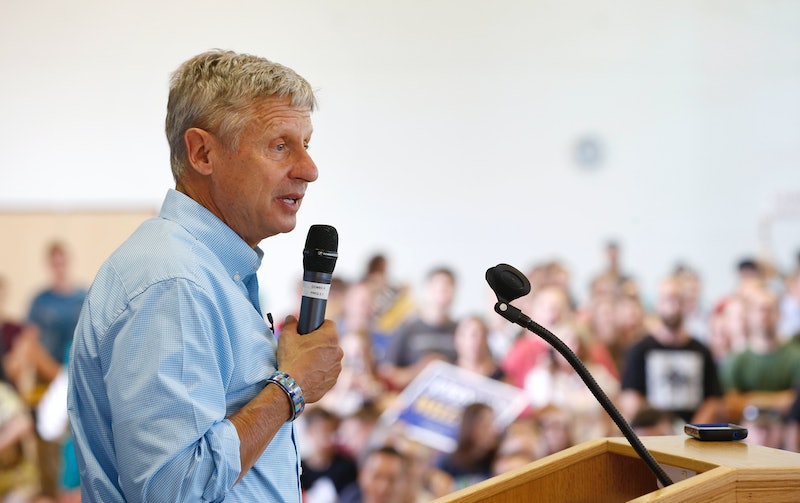 On Thursday morning while speaking on MSNBC's Morning Joe, Libertarian presidential candidate Gary Johnson said "And, what is Aleppo?" when Mike Barnicle asked him he'd about how he'd respond to the Syrian city that is racked with a refugee crisis. Barnicle sort of gave Johnson a chance to move forward, saying "You're kidding," to which the former New Mexico governor responded, "No!" In a presidential election year that has seen some significantly outrageous and ridiculous lines, Johnson's "What is Aleppo?" question may go down in facepalm notoriety. Hours after the comment, Johnson released a statement to CBS:

Yes, I understand the dynamics of the Syrian conflict — I talk about them every day. But hit with "What about Aleppo?," I was immediately thinking about an acronym, not the Syrian conflict. I blanked. It happens, and it will happen again during the course of the campaign.

Here's why Johnson's error was more than a major gaffe; it's a big freaking deal for a person running for the highest office in the land not to immediately know what Aleppo is.

Aleppo is the largest city in Syria, and it's the center of the wreckage of the country's civil war, which has been going on since 2012. As a result, Aleppo is at the heart of the country's massive refugee crisis. According to the UN High Commissioner of Refugees (UNHCR), there were around 4,013,000 Syrian refugees as of July. "This is the biggest refugee population from a single conflict in a generation. It is a population that deserves the support of the world but is instead living in dire conditions and sinking deeper into abject poverty," UN High Commissioner for Refugees António Guterres said. Moreover, UNHCR noted that another 7.6 million Syrians were displaced within the war-torn country.

The situation is far from improved. In a press release from Aug. 1, UNICEF stated:

About 25,000 people, including more than 12,000 children, have been displaced last night from a neighbourhood in western Aleppo City by intense military attacks initiated by armed opposition groups

In one night alone, tens of thousands of residents in and around Aleppo were forced to flee for safety: according to Kieran Dwyer, Chief of Communications for UNICEF, "the eastern part of Aleppo city has been completely cut off from humanitarian aid since early July," and area, "where 300,000 people, including over 120,000 children, are in need of nutrition, food, clean water, and health services."

By asking "What is Aleppo?" Johnson appears unaware of this massive refugee crisis — or how he would respond to it as president. While he looks, frankly, comically inept, there are serious and grave implications. Granted, based on current polling, Johnson won't make it to the main debate stage, let alone the White House. But any person running for the presidency should be very well versed in the horrors facing the ravaged city of Aleppo and its people. Millions of lives are at stake.

Moreover, I doubt if Johnson, an otherwise intelligent-seeming man who's been in politics for many years and is running one of the more recently successful third-party candidates. If he doesn't know what Aleppo is, I imagine many, many other Americans don't. None of us — not just Johnson — can have our heads in the sand on Aleppo.