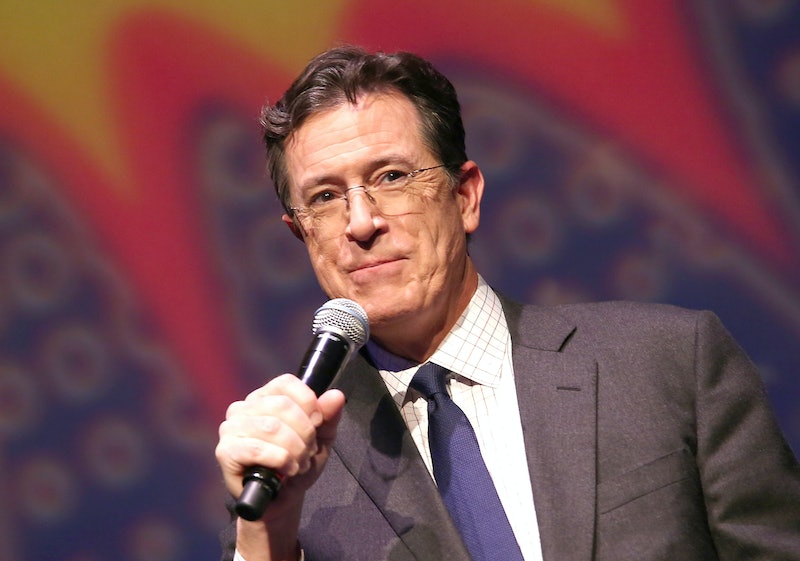 So, yeah, about Taylor Swift and Tom Hiddleston being dunzo... Are fans collectively that upset about it? I suppose some are pretty torn up, but not because they were particularly attached to the relationship. It's more so how Stephen Colbert eloquently explained it on The Late Show: "I’m especially sad about this because their love was in the press so much, I thought I was part of it. In a way, it feels like they broke up with me." And to let all of his feelings out, Colbert sang an original Hiddleswift breakup song that was less about their heartache and more about his own personal feelings about the Hiddleswift rug being pulled out from under him.

How did Colbert highlight the very real feeling that Hiddleston and Swift's relationship wasn't between just the two of them, but also included pretty much everyone else with a Twitter account or a subscription to a gossip magazine? By naming the song, "Taylor, Tom, and Me (Goodbye Hiddleswift)" and going so far as to change their couple name into "Colbiddleswift" in the lyrics of the tune in order to include himself.

"And sure, I wasn't there, but photoshop don't care. And, with a little cut and paste, the three of us were quite a pair. But, now it's gone and done. Where did Colbiddleswift go wrong? My heart is on the floor. I've got 'Bad Blood' with amor. So, goodbye Tom and goodbye Tay Tay. Don't worry about me, I'll be OK-kay..."

Hiddleswift was so high profile that it never actually seemed like a personal relationship at all. It was pretty much public domain from start to finish and as plastered as their pictures were all over the internet (hello, hilarious "man, we spent a lot of time on rocks" reference in Colbert's song), their relationship was still somehow so vague that it's actually not that great of a loss after all — at least to the public who followed it. This is a sentiment that Colbert punctuates the song with, singing at the end, "Because I've found a brand new love, that will never go kaboom. Goodbye, Colbiddleswift. Hello, Colbkatlando Bloom."

I mean, photoshopping your head onto a naked body and into the infamous paddle board picture with a similarly nude Orlando Bloom and a nonchalant Katy Perry, is kind of more interesting than holding hands with Hiddleston and Swift on a beach, anyway, isn't it? Yeah, Colbert knows what's up.