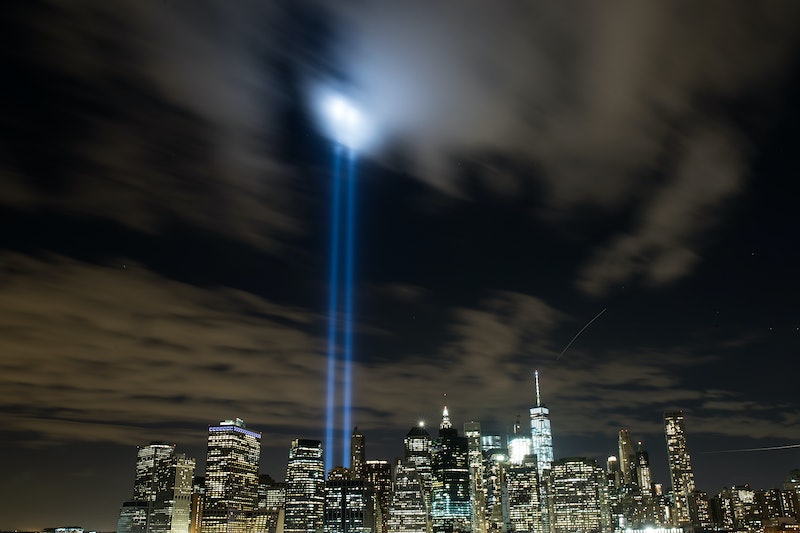 As we come up to the 15th anniversary of 9/11, it may be time to revisit some of the conspiracy theories surrounding Sept. 11th, because even after over a decade, they refuse to disappear. If you've ever had to listen, exasperated, to somebody pontificating that "jet fuel doesn't melt steel beams" over Thanksgiving dinner, you might not be particularly pleased about this. But the persistence of 9/11 "truthers" is a virulent and bizarre aspect of American culture, and, if nothing else, it's a good idea to periodically put the more ridiculous aspects to rest.

I've interviewed conspiracy theorists before, in a very different context: There's a subset of people on the internet who believe that Kristen Stewart and Robert Pattinson are married and secretly have two children, "signaling" this to one another and the in-the-know through the press. In that case, the motivation among the believers was the reassurance of being in the clued-up minority, a kind of amplified superiority complex. The 9/11 conspiracy theorists are of a different breed: loud rather than benign, deliberately offensive rather than charmingly irrelevant. But they seem to share one particular indication with the "Robsten" conspiracists, as they're called: No amount of rational evidence, regardless of how it's presented or by whom, can shake their belief.

It'd be admirable if, in the case of 9/11 truthers, it weren't a serious misconstruing of one of the most brutal acts of the 21st century.

The Theory: Flight 93, which crashed in Pennsylvania after a passenger revolt thwarted its hijackers' attempts to crash it into an unknown target, probably in Washington, D.C., is subject to several conspiracy theories. Popular Mechanics lays out the basics: "Conspiracy theorists," it explains, "assert Flight 93 was destroyed by a heat-seeking missile from an F-16 or a mysterious white plane. Some theorists add far-fetched elaborations: No terrorists were aboard, or the passengers were drugged. The wildest is the 'bumble planes' theory, which holds that passengers from Flights 11, 175, and 77 were loaded onto Flight 93 so the U.S. government could kill them."

The Truth: The really upsetting thing about Flight 93 is that, thanks to the many calls made by passengers and flight crew to their friends and family, we have a pretty good indication of what actually happened, and how terrible it was. And it turns out that there was in fact a "white plane" flying around the crash site after the plane crashed, but it was a civilian jet asked to see if it could find where Flight 93 had landed.

2. That Israel Was Responsible

The Theory: There are many anti-Semitic conspiracy theories about 9/11, largely centered around the idea that the state of Israel was somehow responsible. Either, the theories suppose, Israel "created" al Qaeda and other terrorist cells, or it physically directed the attacks via the Mossad, its intelligence agency, and sought to give Islamic extremism the blame. And rumors circulated that 4,000 Jewish Americans "called in sick" rather than go to work in the WTC on Sept. 11.

The Truth: Over 400 Jews died in the WTC collapse, more than 10 percent of the total victims; any report of a mass exodus or absence, or "text messages" telling them not to go into work on the day in question have been debunked as well. One of the most persistent pieces of "evidence" for Israel's involvement was the appearance of several Israeli tourists filming the towers collapsing, but arrest and investigation by the FBI revealed that they didn't have foreknowledge of it.

3. That The Lack Of A Stand-Down Order Proves The Government's Involvement

The Theory: A "stand-down order" is an order to scramble fighter jets from the North American Aerospace Defence Command. The fact that this didn't come for a significant while on Sept. 11 is explained by conspiracy theorists as evidence that the government either set up the entire thing or allowed it to happen.

The Truth: In reality, pre-9/11 American aerospace was poorly equipped to deal with multiple sophisticated hijackings. The hijackers shifted or turned off the transponders that allowed air traffic control to track the planes, and at the time, Esquire explains, NORAD only used radar on the ocean surrounding America for incoming threats, not for domestic planes. There also wasn't a good communication set-up between internal Air Traffic Control and NORAD, and NORAD "needed an alert from Air Traffic Control to act," Anthony Sharwood explains, "so basically, you had a system which ensured bureaucratic bungles." By the time phone calls were made and jets were scrambled, the planes had "disappeared" because their tracking had turned off, and there was no radar available to find them.

4. That Wall Street Knew In Advance

The Theory: This one appears to be based more in solid fact. As soon as a week after the attack, CBS was reporting that Wall Street had noticed an unusual amount of activity around the shares in the airlines used in the hijackings, with the presumed foreknowledge that they were going to plummet after the attacks. At the time, CBS reported, "U.S. investigators want to know whether Osama bin Laden was the ultimate 'inside trader' — profiting from a tragedy he's suspected of masterminding to finance his operation." Reasonable enough. But it went wider than that. Beyond the idea of bin Laden playing the markets, conspiracy theorists argue that others had insider knowledge of the attacks beforehand, and used it to make themselves a fortune.

The Truth: The numbers were suspicious enough for official investigations to be launched: Both United and American Airlines stocks were "shorted" by unexpected margins in the days leading up the attacks. But the 9/11 Commission found that the stock weirdness had other explanations: It turned out, according to its report in 2004, that the United shorting was all down to one investor "with no conceivable ties" to al Qaeda who also bought a lot of American Airlines shares, inflating their value, on the same day. And the American shorting seems to have been traced to an investing newsletter published on Sept. 9 that advised all of its members to do it, without any apparent terrorist motives. Of course, this was a government report, so the truthers weren't satisfied in the least.

5. That The Buildings Were Demolished As Part Of An Inside Job

The Theory: This is one of the more popular conspiracy theories, if conspiracy theories can ever be said to be "popular." Adherents believe that the planes were in fact not sufficient to collapse the buildings so "quickly" or "symmetrically," and were a set-up for their demolition. The theorists pull together a rag-bag of ideas to support this theory: that jet fuel itself doesn't burn hot enough to melt steel beams and bring down the internal structures of the WTC, and that some explosive thermetic material was "found" among the debris. As to who actually mounted the demolitions, opinions are divided, but this is one of the theories that clusters around the "inside job" idea: that, for reasons opaque to the remainder of the world (causing a new Gulf War, inciting racial hatred, pure bloody-mindedness), the U.S. government staged fake building collapses with stunt planes and used them as justification for its own actions.

The Truth: As Esquire noted in its dismantling of the most popular 9/11 conspiracy theories, it's quite true that jet fuel doesn't burn at a sufficient heat to produce a melting point for steel. "But the frames did not even need to fully melt for the buildings to collapse," they note; "they just had to weaken significantly. Steel loses about half its strength at 1,100 degrees, and moreover, the fuel wasn't the only source of fire." The interiors of the buildings were definitely sufficiently hot from the combined combustion of jet fuel and other materials to cause enough structural damage for collapse. Meanwhile, the BBC explains that the planes actually severed support columns within the building, that no evidence has ever been found of definitively explosive material (and certainly not enough to prompt a demolition), and that the buildings' collapse, from the top down, is the complete opposite of traditional demolition types, which work from the bottom up.

Australian conspiracy theory debunker and journalist Anthony Sharwood also points out the absurdity of the entire theory. "Imagine," he wrote in 2015, "the legions of people who would’ve had to spend months, completely undetected, concealing tonnes of explosives in the two towers to generate enough explosive force to take down both buildings. Imagine those people performing this sinister covert work despite the security and sniffer dogs which had been permanently stationed on site ever since the Trade Center truck bombing in 1993." Both physically and psychologically, this one's a total loss.