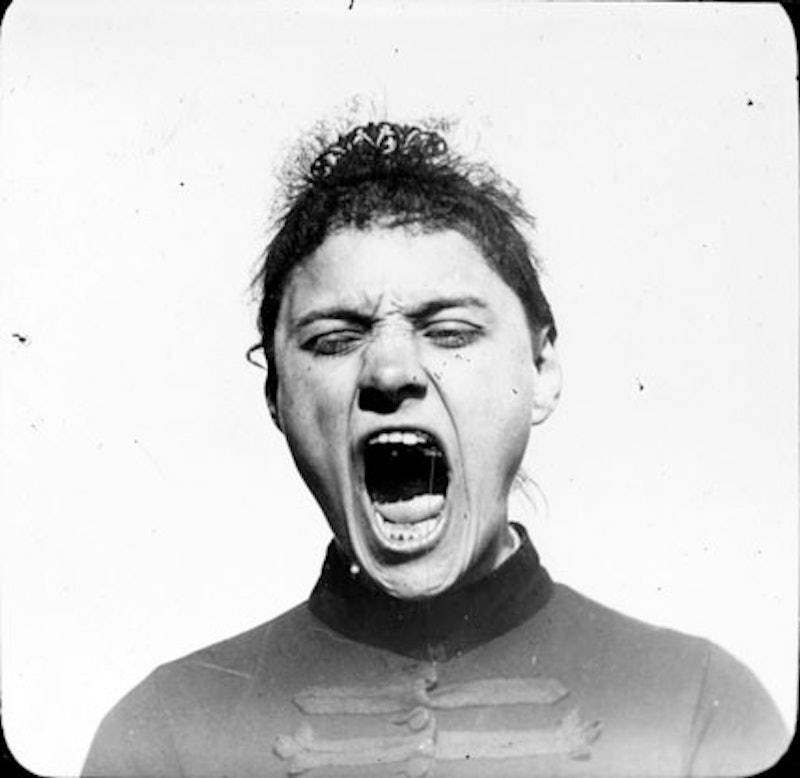 The modern meaning of the word "epidemic" tends to be a medical one: contagious diseases and plagues spread among a high percentage of the population. But in some instances, epidemics might not be medical at all, or at least medicine can't find a source for them; they seem to be rooted in a mix of psychology, socio-cultural pressures, and stress. What else could make hundreds of people dance themselves nearly to death in 1500s Strasbourg, or laugh for several weeks in 1960s Africa? Other explanations have been suggested, from poisoning to demonic possession; but generally speaking, the explanation for such strange mass epidemics is "mass hysteria," a collective delusion or behavior rooted not in schizophrenia or mental illness but in the credulity and susceptibility of a particular community.

Some types of mass hysteria are more documented than others. Epidemics of mysterious disease where nobody appears to actually be ill are called mass psychogenic illness, or the “rapid spread of illness signs and symptoms affecting members of a cohesive group," according to the British Journal of Psychiatry. One person may show signs of illness, but the illness will "spread" without any rhyme or reason, even if it's a non-contagious condition like a broken arm or trembling hands. It's particularly observed in young women in stressful environments, like strict schools or nunneries.

Aside from mass psychogenic illness, though, epidemics can take extremely strange forms: delusions about penises, the belief that somebody's turning into a dog, and the absolute insistence that some strange person is randomly going around spraying noxious gas into the bedrooms of nubile young ladies. Influenza, by contrast, isn't nearly so glamorous.

The most famous "epidemic" in history is likely the "dancing epidemic" that struck Strasbourg in 1518, started off by one woman, Mrs. Troffea. According to numerous accounts, the woman began to dance uncontrollably in the streets, without any ability to stop. Instead of an isolated incident, though, this proved to be the start of a shocking behavioral plague: men, women, and children also began to dance compulsively around the region in the weeks that followed, and it was estimated by the time the epidemic tapered off that it had affected around 400 people, many of whom were taken to a "healing shrine" to try and cure them (if they had survived the ordeal).

Bizarrely enough, this wasn't even the first dancing plague in European history; a set of very similar circumstances had hit villages along the Rhine in 1374, spreading as far as Italy and Luxembourg. Various explanations have been offered for the dancing, from the existence of a trance state to religious fervor and mass poisoning, but nobody has ever confirmed anything.

The particular conditions in which medieval nuns across France and Germany lived in the 15th century seem to have exposed them to some very odd ideas. One observer, writing in 1844, said that he'd come across evidence that one convent was taken over by a plague of "cat imitation":

"I have read in a good medical work that a nun, in a very large convent in France, began to meow like a cat; shortly afterwards other nuns also meowed. At last all the nuns meowed together every day at a certain time for several hours together. The whole surrounding Christian neighborhood heard, with equal chagrin and astonishment, this daily cat-concert, which did not cease until all the nuns were informed that a company of soldiers were placed by the police before the entrance of the convent, and that they were provided with rods, and would continue whipping them until they promised not to meow any more."

The official explanation was, apparently demonic possession; and it didn't stop at cats. The psychologist John Waller, writing for The British Psychological Society, reports that in 1491 there was a problem with various nunneries experiencing nuns who behaved like dogs, birds or cats, running, jumping, clawing, and biting. Religious repression, strictness, and hysteria have all been blamed for the problems.

In a case of paranoia gone mad, two different communities across Virginia and Illinois decided that somebody called the "phantom gasser" (or "mad gasser, if you were going for an Alice In Wonderland reference) was standing outside the homes of young women and effectively anesthetizing them with poison gas. Psychology Today reported that the man in question was thought to be "spraying poisonous mist into the bedroom windows of teenage girls, causing nausea, vomiting, and burning sensations in their mouths and throats."

The whole situation was extremely odd to authorities; no assailant was ever captured, the image of the person in question varied considerably (a few described them as a woman dressed as a man), and it was often very unclear if anything had happened at all. Whether the women in question were lying, extrapolating from strange smells, or genuinely thought somebody was coming after them with germ warfare remains an open question.

Laughing fits are renowned for being vaguely contagious, but one episode in Tanganyika in 1962 demonstrated that the behavior is so catching in high-stress situations that it can hobble an entire community. The problem apparently started after three schoolgirls got the hysterical giggles and were seized with fits of laughters and weeping, and from there, unrestrained hysterical laughing fits that could last up to several days spread throughout the classroom and into the wider community, at one point affecting an estimated 1,000 people. The school itself was closed, as were two nearby boy's schools as the disease spread, but the community itself was in uproar.

Medical investigators could find no physical reason for the laughter and accompanying hysterics, and determined that it was likely a case of mass hysteria in "a susceptible population."

Koro is a specifically cultural delusion involving the retraction or "shrinking" of the penis, nipples, or vulva. And in the case of the "epidemic" of 1967 in Singapore, the blame can be placed firmly on the media. The British Medical Journal reported in the following year that "a sudden feeling of retraction of the penis into the abdomen" was the main characteristic, complete with the idea that "if help was not forthcoming, the penis would disappear into the abdomen with a fatal outcome," noting that patients would do their best to stop the shrinking with anything to hand, from clamps to rubber bands.

In 1967, national newspapers in Singapore ran rumors that local pork was carrying a vaccination for swine flu that would cause the condition, and that one of the pigs that had been vaccinated had been found dead with a retracted penis. Panic spread, and people with imagined koro began turning up at hospitals at a high rate, despite the best efforts of medical professionals to assure them that there is no chance of the penis "retracting". Most of the affected boys were under 20, and all had apparently known about koro as a phenomenon before rushing to the hospital holding their penises on with rubber bands.

More like this
How To See The Lunar Eclipse On May 15-16, 2022
By Kaitlyn Wylde
How To Fight For Reproductive Rights, Based On How Much Time You Have
By Courtney Young
5 Crystals For Anxiety
By Megan McCarty
5 Crystals To Manifest Better Sleep
By Megan McCarty
Get Even More From Bustle — Sign Up For The Newsletter