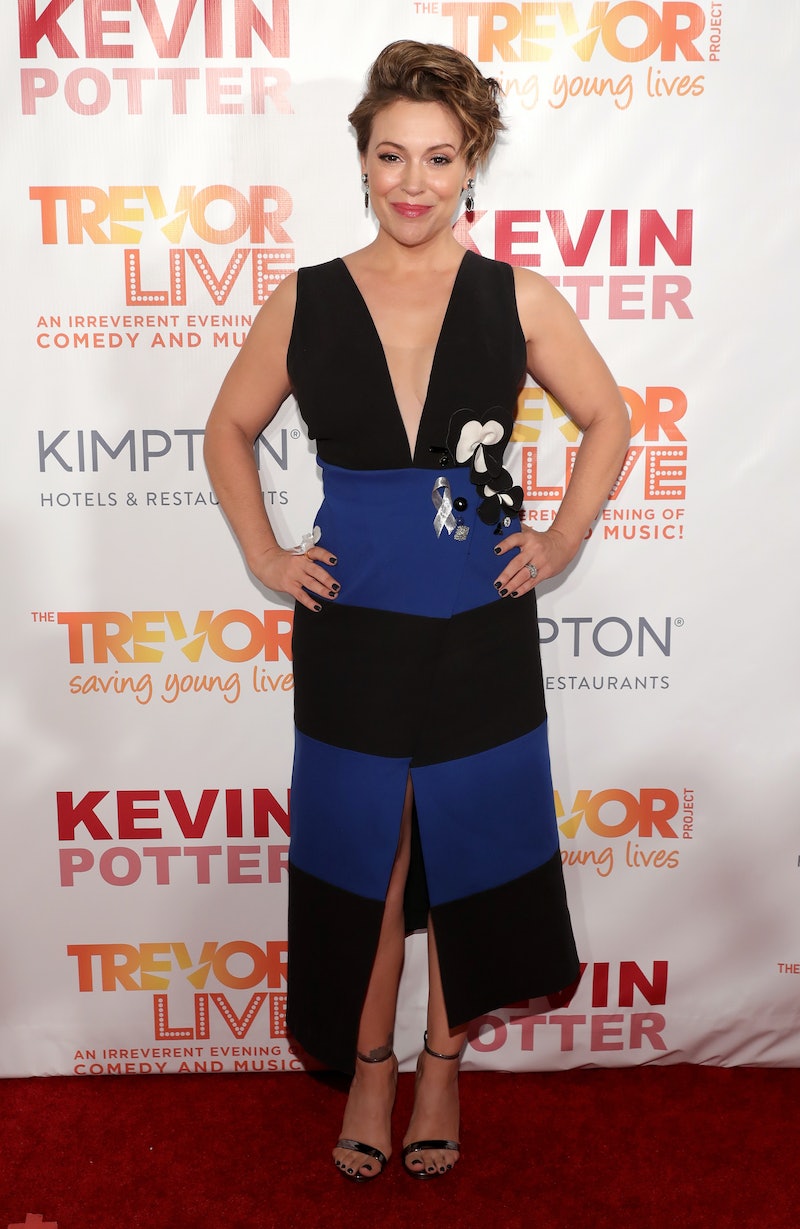 Back in her Charmed days, Alyssa Milano was an early '00s fashion icon known for wearing the biggest trends of the decade. A quick Getty Images search brings up several photos of her in asymmetrical dresses and tube tops circa 2001. Milano's career has taken an unexpected turn in recent years — she's still acting (her most recent project listed on IMDB is a 2016 TV movie called What Goes Around Comes Around currently in post-production) but she also helms a football fan apparel line called Touch.

The label was originally founded in 2008, according to Bloomberg, and although the pieces currently for sale on the NFL Shop website are certainly contemporary, Milano says that the early '00s have influenced the way she thinks about the brand, as well as her own wardrobe. "As a designer of my own collection I am always looking at trends," she tells me over email. "[I]t is pretty funny… there are actually a lot of women’s fashion styles from the early 2000s that are still relevant and have inspired some of the styles in Touch, such as Juicy Couture sweatshirts, denim mini skirts, Lacoste polo shirts, long sweater Jackets, lace-up jeans, trucker hats, and baseball shirts." Quite an extensive list, no?

Like the actress-turned-designer herself, Touch by Alyssa Milano is always evolving. This year the brand announced it would be adding a Touch Maternity range for expecting mothers, according to People.

Milano's personal style has changed a lot in the past 10 years, but there's one early '00s staple that she has never stopped wearing — and it's one that you probably still have in your closet as well. "[T]here is nothing better than a comfy pair of Uggs!" she says. Given that her style is frequently laid back and comfortable, it makes perfect sense that these iconic boots would be a staple in her wardrobe.

So while you might not be seeing Milano in this black mesh half shirt again, it's always good to know that some celebs who made it big in the early '00s have fond memories of the things they used to wear. All of us who attended high school in frayed denim skirts and those thermal shirts made out of waffle fabric with the holes for your thumbs to go through can certainly relate.

More like this
Fashion Trends From 2002 Making A Comeback
By Avery Matera
10 Nail Trends That Perfectly Capture The Early 2000s
By Paris Giles
Machine Gun Kelly Wore A $30K Diamond Mani To The BBMAs
By Paris Giles
How To Master Baby Braids, According To TikTok
By Tomi Otekunrin
Get Even More From Bustle — Sign Up For The Newsletter