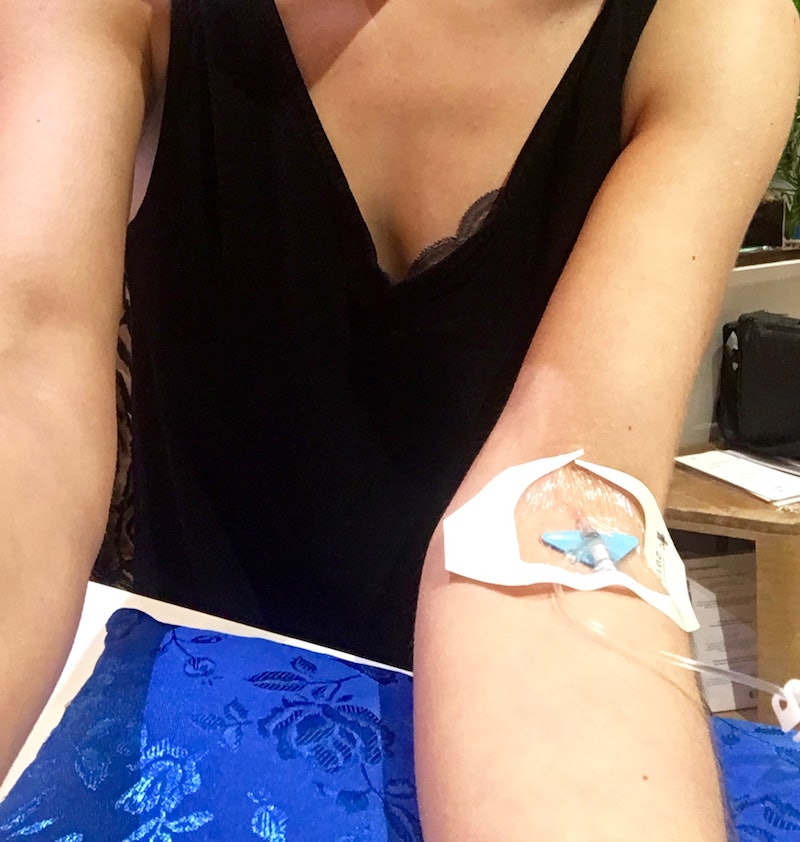 The day I went to get a NutriDrip IV of vitamins at The Alchemist's Kitchen in (where else) New York City's Lower East Side, I was just getting over a cold, and was already feeling mostly better. "Oh, this will knock whatever's left of it right out," the nurse assured me as she found my vein.

I was getting The Detox Experience, a $249 blend "designed to flush toxic build up from your body and spirit, eliminate toxins, reduce inflammation and release stress," according to the press release. Though The BOOST Experience — "Designed to quickly replenish important nutrients that boost energy, mood and cognitive function" — was also being offered, the NutriDrip people told me that all the journalists being given complimentary drips had been selecting the Detox instead; perhaps because it was the more expensive blend, or perhaps because, living in New York City, most of us need to detox.

I'm not someone who's super into the idea of cleanses or detoxing — I live a pretty healthy lifestyle as is and get easily hangry, so it's always seemed unnecessary — but the idea of making myself healthier, simply by sitting? Now that was appealing. I was curious if the influx of vitamins would bring to surface a new me, someone more energetic, glowing, and somehow optimized, if only temporarily. If I did feel markedly different, it would also be a sign that I needed to go to a doctor and have blood work done to make sure I wasn't normally deficient in any vitamins (something I'd been meaning to do but hadn't gotten around to).

The idea behind giving yourself an IV of vitamins is that you absorb more nutrients that way; you only absorb about 30 percent of what's in a supplement after it goes through your digestive system, making it "impossible," NutriDrip's website claims, to give yourself effective "megadoses" of vitamins. "Intravenous administration is the only safe and effective way to achieve the desired therapeutic levels of vitamins and antioxidants like Glutathione and Vitamin C. NutriDrips give your body a potent blast of these pharmaceutical grade vitamins directly into your blood stream allowing for 100% bio-availablity and absorption."

Indeed, the Detox Experience offered a laundry list of vitamins, including all the B vitamins, Taurine, Vitamin C, Zinc, Magnesium, Chromium, Copper, Manganese, and the supposed secret weapon, Glutathione. "Master anti-oxidant for detoxification, [Glutathione] protects cells from free radicals caused by stress and pollution, [and is an] immunity booster, anti-inflammatory, and provides brighter glowing skin," Nutridrip's handout told me.

Though I'd read that there's little evidence to back up the superiority of vitamin IVs beyond the placebo effect, I've never been squeamish about needles and had inhaled an entire summer's worth of hot garbage, so I figured I could use all the laissez-faire detoxing I could get.

My IV inserted, I sat next to the other women at the drip bar and placed my elbow on the custom scented pillow. Unlike the one time I'd gotten an IV at the hospital because I was dehydrated, I didn't feel particularly cold or uncomfortable with the urine-colored vitamins dripping into my arm. In fact, I could feel the placebo effect working almost immediately. Was it just me, or was my skin already glowing? That the women around me also all had catheters in their arms somehow didn't feel weird; it was like a cross between being at the spa and being at a bar — just, you know, with needles.

"It will take about three hours to feel the full effect," the nurse assured me. "Though some people say they have a high right away, it takes that long for your body to process and integrate the vitamins." I asked her why people normally get the drips.

"People get it for all kinds of reasons," she told me. "They might be feeling sick, tired, or even when they're hungover." These were some people with some disposable income, clearly. But it made sense — isn't it the ultimate in luxury to party with table service and then revive yourself with your own private IV of vitamins the next day, preferably with a cold basil-cucumber compress over your eyes?

If you want to be a stylish, modern woman of a certain demographic, you're probably going to live in a polluted city, use chemical-ridden cosmetics, party hard, sleep too little, stress too much, and barely cook. The remedy? Buy $15 tonics, get an IV of vitamins, and practice mindfulness meditation while you're at aerial yoga.

I asked her how often clients usually get the infusions.

"The effects last about two to four weeks, so about that often, for regular clients. Some people just do it on occasion." She told me that usually, NutriDrip does home visits using a "Mobile Concierge Service."

A woman, also a journalist, sat down next to me. She looked tired, and told the nurse she was exhausted.

"Girl, I feel you. I'm doing makeup for it," my nurse, also apparently an accomplished makeup artist, said. "We were actually thinking of bringing this backstage and doing it for the models, but we decided it would be too chaotic. Instead, we're thinking we'll do a recovery event for them, like a 'Detox From New York Fashion Week.'" I pictured the models, all lined up in a row, IVs in thin, long arms. Seemed about right.

While it's hard to find exact numbers on just how popular these treatments are, NutriDrip certainly isn't the only game in town offering vitamin IVs, and celebrities from Rihanna to Miley Cyrus and Madonna are reportedly all fans. I mean, can you think of a more glamorous way to cure your hangover?

Just then, a woman from The Alchemist's Kitchen came over with my complimentary drinks, the Golden Glow Shot and the Spirit Elixir. The shot was a one-two punch of turmeric and ginger, and the Spirit Elixir tasted like a delicious, iced lemon chaser (a secret blend, apparently). They tasted refreshing — and expensive. The combination bumped the retail value of my package up $50, now standing at $299. (By the way, The Drip Bar is now open to the public at the Alchemist's Kitchen, if you make a reservation.)

Though The Alchemist's Kitchen is certainly advocating a return to a healthier lifestyle, that it was filled with effortlessly stylish women who looked like they'd just stepped out of a Reformation shoot was not lost on me. If you want to be a stylish, modern woman of a certain demographic, you're probably going to live in a polluted city, use chemical-ridden cosmetics, party hard, sleep too little, stress too much, and barely cook. The remedy? Buy $15 tonics, get an IV of vitamins, and practice mindfulness meditation while you're at aerial yoga. But the "solution" being marketed these days is hardly what would probably work best: quitting your stressful job and moving to the country — or, at the very least, not binge-drinking and snorting coke every weekend.

"So, how should I expect to feel tonight?" I asked the nurse, now about halfway done with my drip. "With all the B12, will I have trouble sleeping or anything?"

"No, if anything you'll sleep better tonight. You'll feel a good energy after this, but not hyper or too awake. It's more like you'll feel really clear." Well, that sounded nice. 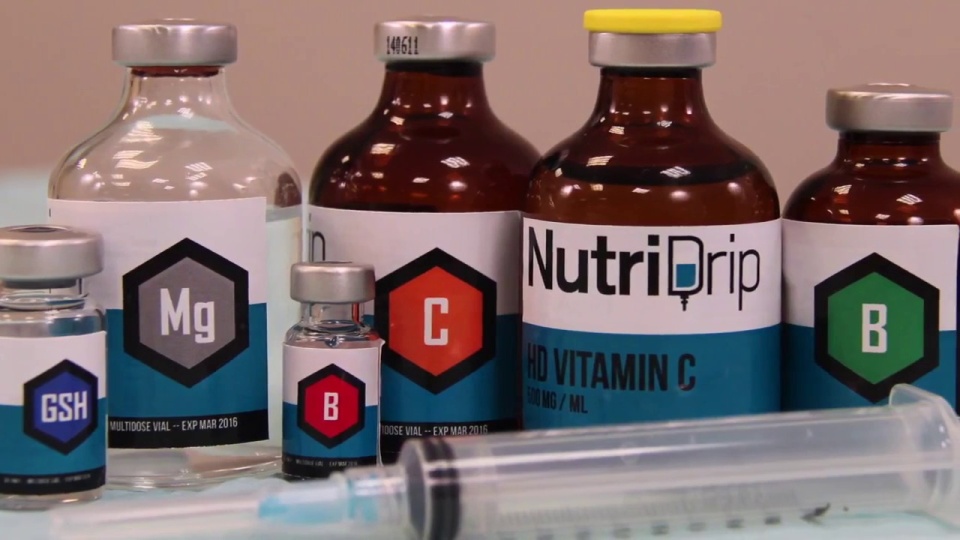 I took the opportunity to pick her brain further. "So, I have a question — if I'm always cold, could that be a vitamin thing?"

She shook her head. "Usually, unless you have a severe iron deficiency, feeling cold in women has more to do with a hormonal imbalance. That, or a significant change in weight. But unless you're very, very low on iron it shouldn't be a problem. Have you had your levels tested recently?"

"Not recently, no." I told her that especially since I was vegan, I probably should, but that I took a multivitamin, B12 supplements, and felt generally good. I got ready for her to admonish me to be more careful, to imply that a vegan diet was somehow riskier to my vitamin health — which, by the way, it's not. (The average omnivore is deficient in seven vitamins, while the average vegan is only deficient in three. Probably because we tend to eat more vegetables.) Instead, she smiled.

"Oh, you're vegan! I have a lot of vegan clients. Well, see, you're already doing so much for your health. So going in next time to get the full blood panel done is just one more thing you can do to protect yourself." I nodded, promising myself I'd ask for the blood work soon — though not too soon, since the mega-injection I was getting would throw off my vitamin levels for about a month.

After about 30 minutes, the drip was out. I was disconnected, and contented. I went back to the bathroom, and looked in the mirror. Was it just me, or did I look more alive, less dull? No; it was my state of mind that had changed, not my skin.

That night, I did feel clear, calm. I had a conversation with my partner about something that, in a worse mood, could have turned into me getting annoyed. Instead, I felt very clearly what I wanted to say, and said it, calmly. I didn't feel irritable, and indeed, I felt happy and centered. We had a lovely night together, I fell asleep easily, and the next morning, I did feel totally over my cold. I think I would have felt better anyway the next day, though it's possible the IV could have sped up my recovery. I guess I'll never know.

In the following weeks, I waited to write this to see if I'd notice any lasting difference. I can't say I have — though I certainly haven't gotten sick again, and my sleep has been pretty good. That's about all I can say. I'm sure my NutriDrip didn't hurt, but I'm no Incredible Healthy Hulk.

So, would I actually pay $250 to get a vitamin IV again? No, but I will be asking my doctor for that blood panel. But would I do it again for free? Absolutely. Even if it was just a placebo, that effect alone left me feeling great — and an effective placebo certainly has real, proven benefits. But for now, I guess I'll have to leave the luxury of the NutriDrip experience to the models recovering from Fashion Week. Something tells me they need it more than I do.

More like this
How To Fight For Reproductive Rights, Based On How Much Time You Have
By Courtney Young
6 Abortion Advocates To Follow On TikTok
By Sara Youngblood Gregory
How To Protect Your Digital Privacy If You Need An Abortion Post Roe v. Wade
By Kaitlyn Wylde
What Even Is A Healthy Relationship?
By Brittany Leitner
Get Even More From Bustle — Sign Up For The Newsletter