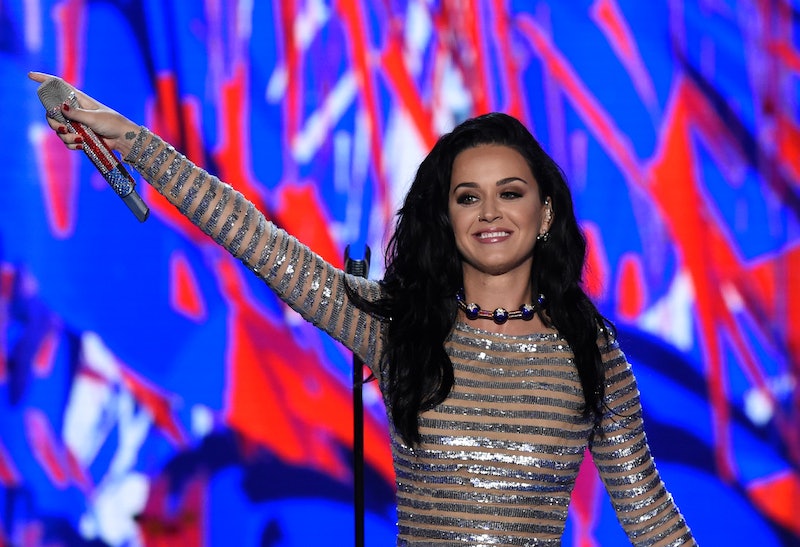 For Orlando shooting survivor Tony Marrero — who survived the horrific Pulse nightclub shooting after being shot four times in the back (his friend and Wizarding World of Harry Potter co-worker, Luis Vielma, did not) — being on the Ellen DeGeneres Show on Wednesday and meeting the host would have been enough. But once DeGeneres learned that Katy Perry's "Rise" was the inspirational anthem of his recovery, she took things a step further and brought out the pop star to surprise Marrero on the show. Needless to say, Perry surprising the Orlando survivor was an incredibly emotional moment to witness, one that had both Marrero and Perry sobbing.

"We're both electrified by each other and so inspired," the singer told the young man, pointing out that her hands were shaking and that she had snuck a folded up napkin up her sleeve because she knew that she was barely going to be able to keep it together upon meeting him. But just meeting wasn't enough — they each had things that they needed to tell each other.

"I just want to say thank you for everything. Your lyrics, from that song, helped me from the day that I was in the hospital all the way to now," Marrero told Perry through tears, as the singer choked back tears herself. And then Perry thanked Marrero in her own generous way.

"I heard that you want to go to film school," she said, "so I personally want to pay for your first year of film school."

There is much to be said about Perry and Marrero's interaction. The emotionally-charged moment is rife with inspiration and gratitude, with genuine kindness and generosity, with meaning and sincere emotion. And while it is Perry's surprise that is the action that made headlines, it is beyond clear in their meeting that it is equally as moving for both of them.

It allowed Marrero the opportunity to meet Perry face-to-face and thank her for a song that was so instrumental (and inspirational) in his recovery. And for Perry, to be able to meet the young survivor and see someone who is the face of courage — and to be able to help him achieve his dreams, both in his recovery from the shooting and in his career in film school — was undoubtedly incredibly impactful. To be able to use her platform, her career, in order to help fans in the darkest depths of their despair: That is truly what it means to be an entertainer.

Perry and Marrero's emotional meeting is a moment that reminds us that we are all just human beings, helping each other out in any way we can. There wasn't a dry eye in the house, and it's for good reason.