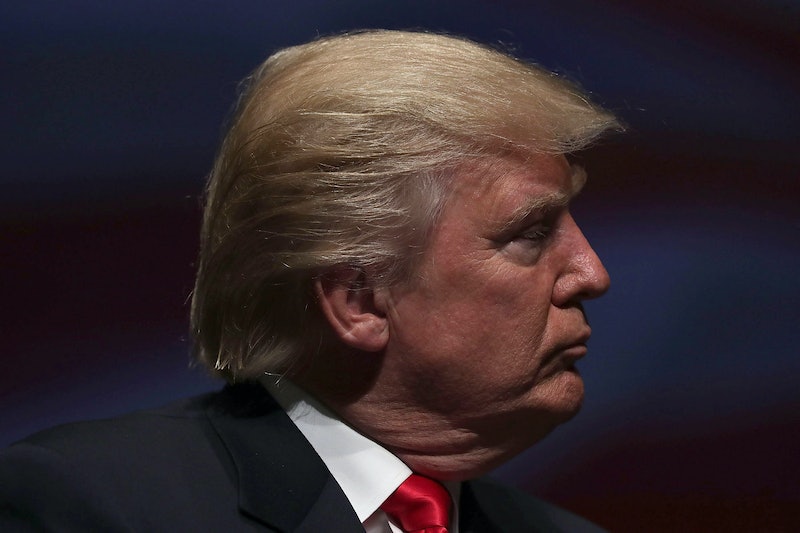 Donald Trump is a different kind of Republican. He'll tell you this, and so will most Republicans. Perhaps the most high profile break from traditional Republican dogma is his words in support of the LGBTQ community. In Trump's speech at the Republican National Convention, he said, "As your President, I will do everything in my power to protect our LGBTQ citizens from the violence and oppression of a hateful foreign ideology," and then, in response to the crowd, "I must say as a Republican it is so nice to hear you cheering for what I just said." This speech came just a few minutes after the businessman Peter Thiel spoke at the RNC, saying "I am proud to be gay. I am proud to be a Republican."

Trump seems — and is — more friendly towards the LGBTQ community than many prominent Republican politicians because there is somewhat of a low bar. Let's remember, Trump still opposes marriage equality. But it's still an impressive leap forward for the Republican Party, which just a year ago was celebrating Kentucky county clerk Kim Davis and legislating sexual orientation discrimination in Indiana (which was, of course, enacted by Trump's VP candidate, Mike Pence).

But this weekend, Trump will be reminding us that he hasn't moved too far from the segment of the Republican Party that wants to treat gays as second-class-citizens at best. He's speaking at the Values Voters Summit, an annual conference of leaders of the Christian right, and many of the other speakers have most emphatically not joined Trump on gay rights.

While I don't know what Trump will say, I believe his appearance at the Values Voter Summit is a solid case of where it's quite legitimate to judge someone by the company he chooses to keep.

It’s kind of like marriage when you say it’s not a man and a woman any more. Then why not have three men and one woman, or four women and one man, or why not somebody has a love for an animal? There is no clear place to draw the line once you eliminate the traditional marriage.

There will also be various celebrities who have gotten in hot water for their anti-gay rhetoric. Phil Robertson of Duck Dynasty, who suggested AIDS was punishment for the "modern immorality" that is homosexuality, will speaking Friday night. There will also be the Benham brothers, who lost their HGTV show after it came to light that David Benham protested several gay pride parades and said same-sex marriage would “erode the moral fabric of society," along with many other anti-gay statements.

But the most hardline speakers are less famous. Friday morning brings a speech from Tony Perkins, the head of the Family Research Council, an advocacy group that has offered at least some defense, if not praise for a controversial law in Uganda that banned homosexuality, at one point with the death penalty. In 2012, Perkins denied supporting the Uganda law, but with a statement that was anti-LGBTQ in its own right:

Despite allegations to the contrary, FRC has never supported that policy — or any policy that imposes the death penalty on homosexuals. What we do oppose is the suggestion that gay and lesbian acts are universal human rights. So when Congress introduced a resolution in 2010 denouncing Uganda’s punishment for homosexuality, FRC fought — at the request of some Members — to strike the pro-homosexual “human rights” language from the final measure.

In his speech shortly after the Pulse nightclub shooting in Orlando, Trump declared that he'd be a better friend to the LGBTQ community than Hillary Clinton. “Ask yourself, who is really the friend of women and the LGBT community,” Trump said in his prepared remarks. “Donald Trump with his actions, or Hillary Clinton with her words?”

Since then we've heard many words from Trump about how supportive he is of the LGBTQ community. But we keep seeing actions like this.