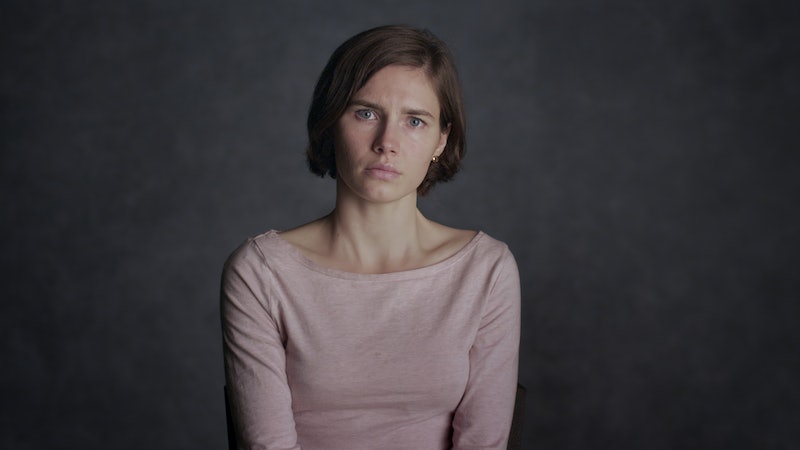 Amanda Knox's case has fascinated people for almost a decade, and now, Netflix has finally decided to take its turn telling her story — and it seems they're going to do it in an extremely compelling way. According to the two Amanda Knox trailers the streaming service just released, the upcoming documentary might not be as cut and dry as, perhaps, previously thought. Ingeniously, the two trailers portray Knox with two different approaches: One is titled "Believe Her," and the other, "Suspect Her." Both trailers include present-day Knox — who, in 2007, was both tried and acquitted twice in Italy after being suspected of murdering her British study abroad roommate, Meredith Kercher — staring at the camera in front of a gray backdrop, intercut with interviews from journalists, prosecutors, and witnesses. Knox maintained her innocence throughout the trial, and to this day.

The first trailer was released with the title "Believe Her." It begins with a voice over from Knox, as she remembers "Suddenly I found myself tossed into this dark place." She appears on-screen, sullen and crying in front of a gray backdrop, telling the camera about how happy her life was before Italy, and that her desire to study abroad in the country in the first place was based on pure, innocent intentions. Then, a reporter relays that "some of the information that came out [about Amanda] was just completely made up," while snapshots of headlines saying unkind things about Knox flash on-screen. Lastly, we see glimpses of Knox crying, with voiceovers telling us "she was terrified."

The next trailer is titled "Suspect Her." It begins with a unidentified voice asking Knox, "Did you kill Meredith Kercher?," a question to which she replies "No." Knox is seen sitting in front of that same backdrop, before the same reporter from the "Believe Her" trailer is seen on-screen asking, "Who behaves like that?" The Italian prosector in the case also speaks, asking, "Is a monster responsible?"

Besides being a clever marketing tactic, the two trailers have a point. In a landscape that's now populated with true crime shows left and right, it's important to take media portrayals of the case into account while learning about the case.

Amanda Knox will be available on Netflix September 30.