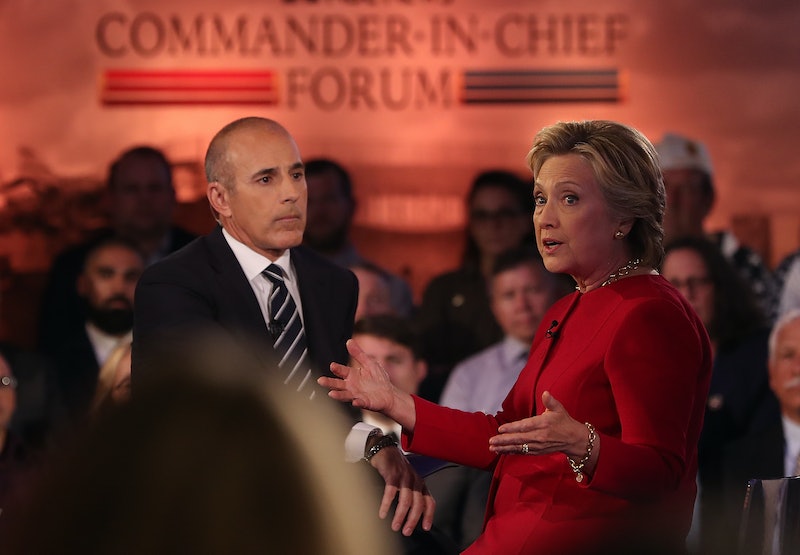 While there are countless sound bites to critique from the Sept. 7 Commander-in-Chief forum, perhaps the most striking story from the military town hall featuring both Donald Trump and Hillary Clinton is what NBC News host Matt Lauer didn't say. Commentators and media professionals alike noted that Lauer didn't fact-check Trump when the Republican nominee said he opposed the Iraq War from the beginning — an obvious lie that takes a simple Google search to uncover.

During the town hall-style forum, Lauer asked Trump a fairly good, albeit weak question: What makes him prepared to lead the American military, and why does he believe he's qualified. Trump ho-hummed about having "good judgement," then took a weird turn:

Many did look at Trump's 2004 Esquire article, but there's a catch: that article was published in 2004 after the war had already begun. Prior to the war's beginning, however, Trump backed the invasion of Iraq. In 2002, for example, he told Howard Stern he supported the war. Lauer likely knew this — so why didn't he rebuff Trump's erroneous claim?

There's really no logical reason from a journalistic standpoint for Lauer's in-the-moment decision to not respond to the obvious lie Trump told. For journalists, fact-checking is a duty, and when it's screwed up, they run an apology and a retraction or state on-air that they'd made a mistake. As of 11:30 p.m. ET, more than a day since the town hall, Lauer had not publicly addressed his lack of fact-checking.

Lauer, whose questionable moderation extended far beyond the Trump-Iraq wash-up, seemed to me to be handling Trump with kid gloves, asking him seemingly open-ended questions that stand in stark contrast to his treatment of Clinton (at one point, Clinton had to ask Lauer to let her finish when he interrupted her). The entire setup of the event was strange — only 30 minutes per candidate including audience questions (many of which didn't even seem to be pre-approved, as is customary in town halls and debates with big candidates). Furthermore, the decision to have Lauer speak individually with the candidates rather than having them both on stage together made it seem to me like the two were middle school rivals who refused to be in the same room together. It also led to what I consider a disjointed double standard in the on-stage treatment of the candidates — Trump got the kid gloves, while Clinton got grilled about her emails by both Lauer and the audience.

Many people have drawn only one conclusion from Lauer's bizarre decision not to fact-check someone who could become commander in chief: that Lauer is a Trump supporter, and was deliberately soft on Trump to make him look better. I don't agree with that line of reasoning, but going so far as to allow one candidate to lie on-air to the millions of voters who tuned in definitely isn't ideal.