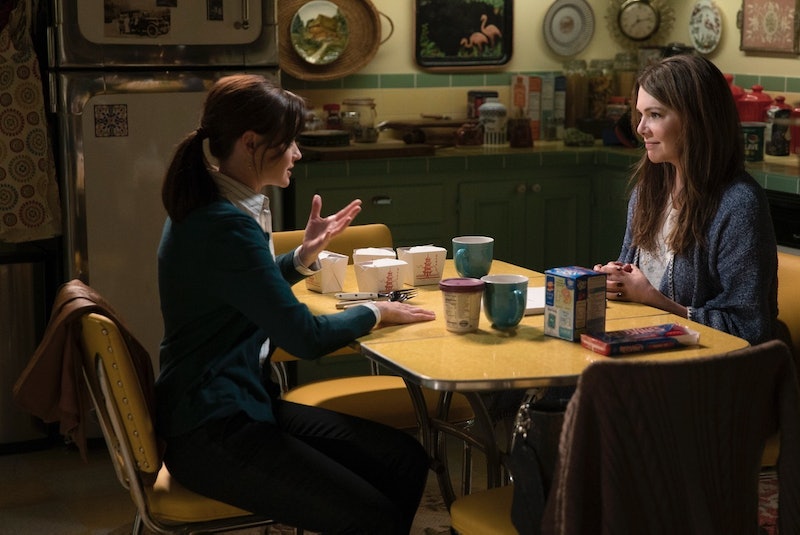 Are you ready for more Gilmore? Of course you are. Not only is it a wonderful day because it's the end of the working week, it's also a real doozy of a day because the Gilmore gods are smiling on us: two new Gilmore Girls revival photos have dropped, and they're giving me all the feels. You may think that you're an extremely ironic millennial who has evolved beyond the grossness of an unfiltered emotional response to a television show, but, trust me, you're not.

One of the pictures suggests that at Stars Hollow, despite the many years passing, it's business as usual. The other will suggest that the sort of things you relate with the passing of time have taken place and, actually, nothing will ever be the same again in the Gilmore clan. Which is to say that one shows Luke giving Rory a talking to while Rory smiles indulgently (pretty much what went on most episodes of the show). The other shows the three generations of Gilmore women — Rory, Lorelai, and Emily — united for a sorrowful occasion: visiting Richard's grave.

This is even more poignant when you consider it's a case of art mirroring life, since the actor who played Richard Gilmore, Edward Kirk Herrmann passed away suddenly at the end of 2014.

I'm particularly pleased to see that Luke has stuck to his iconic baseball cap and plaid shirt pairing. Sure, this look now carries a little more cultural baggage than it did back when the show aired — the 2016 connotation is that he's a freelance graphic designer working in Brooklyn — but, hey, when you have a strong look, you better be ready for the world to follow suit.

The cemetery picture is more sobering. I don't know about you guys, but Richard Gilmore was one of my favorite parts of the show. His presence made Lorelai and Emily's extended contact make sense. He was the middle ground between the etiquette-focused elder stateswoman of the Gilmore family and the more laid back Lorelai, and he could be the most diplomatic of the elder Gilmores. However, perhaps his absence will serve to do much the same thing; Lorelai's surely too warm-hearted to distance herself from her mother during a period in which she would presumably feel highly isolated and depressed.

Either way, these photos are functioning like a lovely but slightly too-small starter when you're ravenous: they're making me all the hungrier for my four course Gilmore Girls revival dinner.