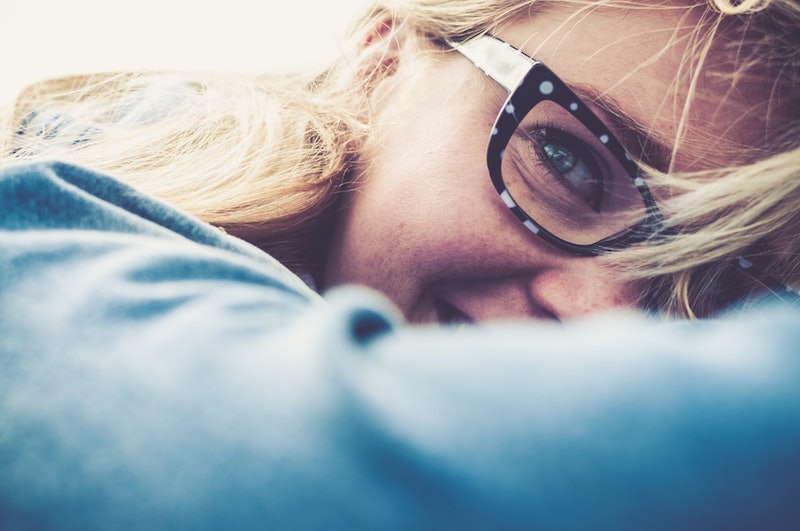 There was a Jewel song back in the day that said, "Please be careful with me. I'm sensitive and I'd like to stay that way." I need to get this tattooed on my face. There are things you should never say to someone who is sensitive, and so many people don't understand this. There are words you can say that seem harmless and normal, but that can cut to the core of a sensitive soul and bring on that dreaded "fight or flight" feeling.

Sensitive people of the world, I'm here to have your back. Take it from me, the girl who cried when her boss called her into the office just to talk about files, I understand what it's like to be sensitive. Oversensitive, even. It's hard out there. Whether your sensitivity is rooted in anxiety, health issues, or just a tender heart, the way your insides often feel like a doormat is pretty much the same. If you don't have people in your life who understand and respect your sensitivity, you're likely to suffer a lot of hurt feelings.

Here's some advice for our friends and family about what not to say to sensitive people, so they can tread lightly and respect our boundaries. Anyone who loves us knows it's what we deserve.

This is something people say when they're about to deliver bad news. Because super sensitive people feel things more deeply, they're likely to have a negative emotional reaction to phrases like "we need to talk" or "I need to tell you something" or "can I ask you a question, and you don't have to answer it?" It's better to just work it into a normal conversation than trigger that worry.

Highly sensitive people often want to control their emotional responses, but they can't. When you tell them they're overreacting, you're just reinforcing the ideas that they're to blame, that they're not trying hard enough, and that their emotions are not honest, valid reactions.

If the sensitive person in your life starts crying at a beautiful sunset, it's not because there is a deep well of unresolved sadness or trauma in their lives. It just means they were really moved. The same goes for "is it that time of the month?" No. I'm having a genuine emotional response that feels natural to me, and that is often beyond my control. Thanks.

This is problematic for two reasons. First, you're not really in a position to tell a sensitive person what they need unless they ask. Second, this line of thinking again implies that the sensitive person needs to change, and that they're not doing the work of changing. Maybe they don't want to change. Maybe they can't be changed. The implication is that they're somehow wrong or broken.

Being sensitive can accompany certain types of mental illness, especially those that deal with sensory processing, but that's not always the case. Some sensitive people are just sensitive people, and they don't need to be treated like they have a disease.

6. "I Didn't Tell You Because You're So Sensitive"

This is unfair. It makes sensitive people feel like they're missing out, they're not good enough, they can't be there for their friends and family, and that they need to be treated with kid gloves. It hurts and it's a fear a lot of sensitive people deal with. Just last week I said to my mom, "Are you not telling me the whole story because I'm so sensitive?" and it turns out I was right.

I had a friend who always told me she needed to drive me through her tough neighborhood to thicken my skin. Countless people in my life have said things to me like "you need to learn to block out the negative" or "you have to learn how to roll with the punches" or "you need to find your inner strength." Sensitive people aren't weak. They're not in need of toughness training. They're in need of understanding.

No. Don't say this because it's not possible. Our feels don't work like yours do. They don't have an easy off switch. They don't need one.

People who feel things deeply (and all people, to some extent) hate to hear, "I know how you feel." You probably don't. You probably have some similar feelings in regards to a somewhat similar situation, but none of us truly understands how any other person feels, especially if the person you think you understand is a highly sensitive person. Better to say something like "I know a little bit about what you're going through."

A person who cries at the drop of a hat isn't necessarily immature. They're not childish. They're not emotionally stunted. They're sensitive. Telling them to grow up is insulting, and it's invalidating their feelings, belittling them, and reinforcing the idea that they need to change.

A sensitive person who is having an intense emotional reaction to a situation is feeling how they feel. Telling them not to take things so personally is like telling them "it wouldn't affect you if you didn't let it." It's just not applicable to the situation. A person who feels deeply processes things in ways that are very personal to them, and they're often aware of the true circumstances of a situation, including if it's about them or not.

That's OK. If I'm crying, you don't need to fix me. You don't need to say or do anything. A lot of people are unsure of how to react when others have strong emotions. It isn't even that something is always wrong. Often it's just that, whatever the feeling, it's intense. Just let us feel and let us know we can tell you if we need something from you.

That's like telling someone with anxiety to calm down. Like they haven't thought about that. It doesn't work. You'll never be successful in telling a sensitive person how to think and feel, so it's better to just give the space to be themselves, tears and all. They wouldn't say "don't be a b*tch when I tell you this." Similar phenomenon.

At the end of the day, you don't have to censor everything you want to say around sensitive people, but being respectful towards people's mental and emotional dispositions is always a good idea in my book.