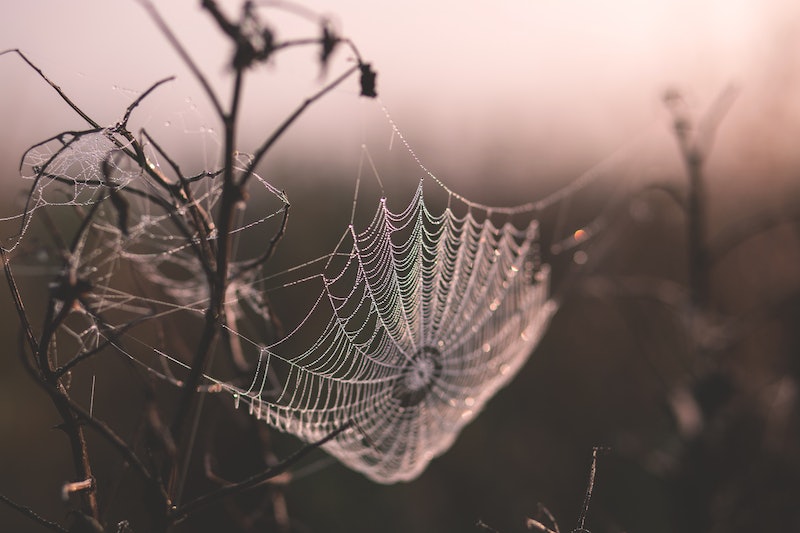 One of the best parts about Halloween is embracing your inner goth. Whether you're into Victorian macabre-ness or dystopian horror tales, the world of literature has a fright for everyone, especially at this fiendish time of year. If you like to read quotes that send a shiver down your spin, here are 13 creepy quotes from books.

Personally, I like being scared by books (and movies, too). There's something comforting about being able to control our fear. Maybe that's one appeal of terrifying novels. In a world where so many fears present themselves completely unbidden, books let us decide the terms on which we decide to confront our worst nightmares. And, of course, books are forgiving-they don't care if you close them in the middle of a sentence that's just too bone-chilling to finish — or, at least, to finish in the wee hours of dark.

What does one do with a bunch of creepy quotes? For starters, you can get your adrenaline pumping. You can also put yourself in the mood to pen your own peculiar Poe-inspired tales. You might share a petrifying quote with trick-or-treaters (okay, maybe not too petrifying lest you peeve parents). Or you might just bask in the heightened state of fright that — at least in October — somehow seems seasonally apropos.

1. “Everybody is a book of blood; wherever we're opened, we're red.”

2. “No live organism can continue for long to exist sanely under conditions of absolute reality; even larks and katydids are supposed, by some, to dream. Hill House, not sane, stood by itself against its hills, holding darkness within; it had stood so for eighty years and might stand for eighty more. Within, walls continued upright, bricks met neatly, floors were firm, and doors were sensibly shut; silence lay steadily against the wood and stone of Hill House, and whatever walked there, walked alone.”

3. “There is something at work in my soul, which I do not understand.”

5. “Naughty John, Naughty John, does his work with his apron on. Cuts your throat and takes your bones, sells 'em off for a coupla stones.”

6. “It may be exaggerating to say that all completely successful short stories, especially fantastic stories, are products of neurosis, nightmares or hallucination neutralized through objectification and translated to a medium outside the neurotic terrain. This polarization can be found in any memorable short story, as if the author, wanting to rid himself of his creature as soon and as absolutely as possible, exorcises it the only way he can: by writing it.”

— Julio Cortázar, Around the Day in Eighty Worlds

7. “It touched me to be trusted with something terrible.”

8. “-there was something in her, something that was...pure horror. Everything you were supposed to watch out for. Heights, fire, shards of glass, snakes, Everything that his mom tried so hard to keep him safe from.”

— John Ajvide Lindqvist, Let The Right One In

9. “Just when you think you've hit rock bottom, you realize you're standing on another trapdoor.”

10. “For people could close their eyes to greatness, to horrors, to beauty, and their ears to melodies or deceiving words. But they couldn't escape scent. For scent was a brother of breath. Together with breath it entered human beings, who couldn't defend themselves against it, not if they wanted to live. And scent entered into their very core, went directly to their hearts, and decided for good and all between affection and contempt, disgust and lust, love and hate. He who ruled scent ruled the hearts of men.”

— Patrick Süskind, Perfume: The Story of a Murderer

11. “You didn’t hear what she told me when I got up — you’re so cute I could put you in a pie. Tell me that’s not the creepiest thing you’ve ever heard.” His voice climbed a few octaves, turning shrill and breathy. “Today for dessert, we have apple pie, blueberry pie and Ezekiel pie.”

12. “We ask only to be reassured/About the noises in the cellar/And the windows that should not have been open.”

13. “The world outside had its own rules, and those rules were not human.”