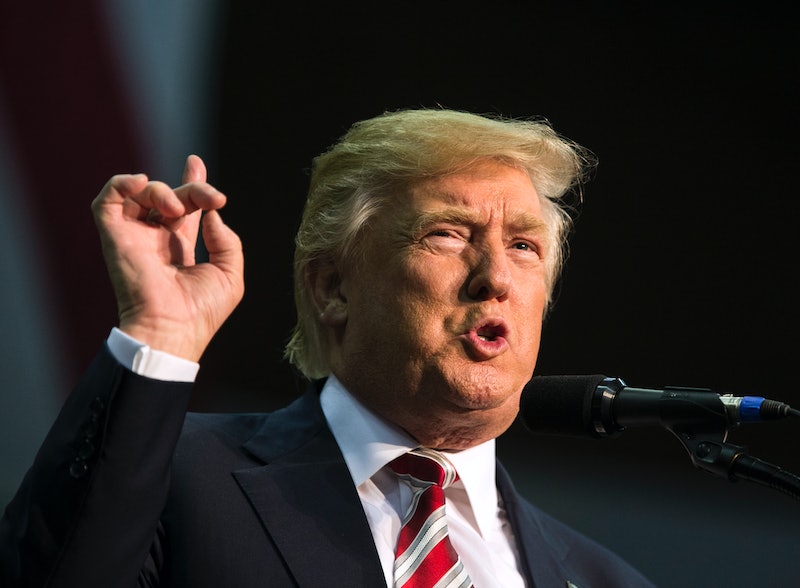 Over the past several months, Republican presidential candidate Donald J. Trump has offered up a litany of controversial statements, inflammatory attacks, and startling claims about what his United States of America might look like. And, on the very same night when his Democratic rival Hillary Clinton drew scrutiny for calling half of his supporters a "basket of deplorables," Trump made one of his most frightening remarks yet, one that's getting elbowed out by all the coverage of Clinton's gaffe ― we should be talking about Donald Trump's Iran war threats a lot more than we are.

If you missed what Trump said during his rally in Pensacola, Florida, you can be forgiven, because it's gotten a good deal less attention than the Clinton gaffe has. But in terms of scale of importance, the two simply can't be compared ― while Clinton may have insulted a large share of Trump's supporters, for reasons that may or may not be valid, Trump mused about taking actions which could, in a very foreseeable scenario, lead to a shooting war with Iran.

Here's what Trump said, suggesting that when Iran's "little boats" antagonize America's "beautiful destroyers" with aggressive maneuvers or "gestures," he'd like to see the U.S. give a decidedly more forceful response: open fire.

And by the way, with Iran, when they circle our beautiful destroyers with their little boats, and they make gestures at our people that they shouldn't be allowed to make, they will be shot out of the water.

It's should be noted that the crowd at the Trump speech seemed pretty excited about this idea. It may sound obvious to say, but if you take Trump at his word on this, then he's effectively pledging to launch an armed conflict against Iran over some disrespects that are truly trifling by comparison. Because that's exactly how wars can get started ― the reason keeping the peace is such a struggle in geopolitics sometimes is because it must take priority over the occasional international provocation, like the recent reports of Iranian ships harassing U.S. vessels in the Persian Gulf.

It's absolutely no exaggeration to say that if Trump actually used his authority as Commander-in-Chief to make good on this rhetoric, he'd be brazenly risking a full-fledged war with Iran, opening up a potentially cataclysmic can of worms that would have tremendous consequences for the entire Middle East. And it's not as if this is the first time he's voiced a trigger-happy ethos on the campaign trail ― he also once proposed ordering the U.S. military to kill the families of terrorists.

Simply put, this is heady, massive, dangerous stuff. And it might be worth a little more attention right now than it's getting, however offended some Trump supporters might be by Clinton's impolitic estimate of how many of them behave, you know, like this.

More like this
'Waterloo Road' Is Back, With More Than A Few Familiar Faces
By Sam Ramsden and Vivian Iroanya
Iran Has Issued A Death Sentence Over Mahsa Amini Protests
By Catharina Cheung, Darshita Goyal and Maxine Harrison
Claire Foy & Rooney Mara Revisit A Devastating Tale In 'Women Talking'
By Bustle UK
Buckingham Palace Aide Resigns Over “Unacceptable” Comments To A Black Guest
By Shahed Ezaydi
Get Even More From Bustle — Sign Up For The Newsletter