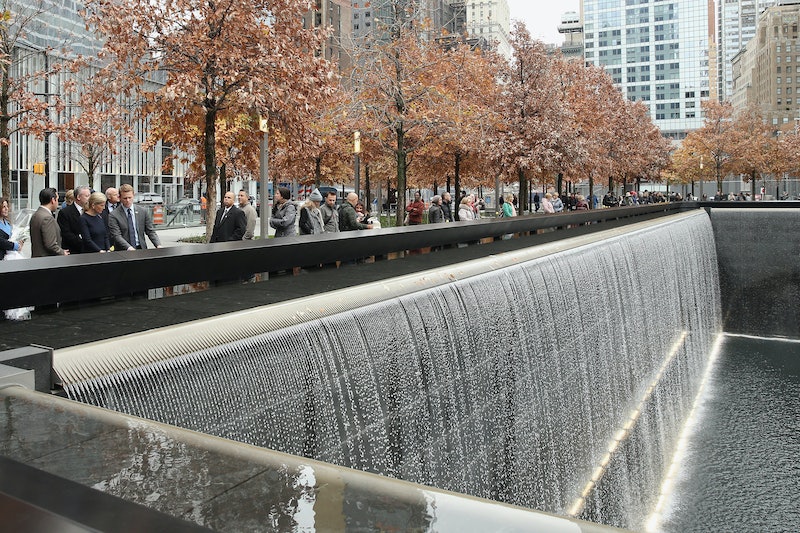 There was perhaps no place more symbolic on Sunday than the National September 11 Memorial & Museum, located at Ground Zero in New York City. The 9/11 Memorial honored victims on the 15th anniversary of the tragic terrorist attacks with a moving ceremony on Sunday morning. The somber event featured moments of silence, the ringing of bells, and the reading of names.

The memorial service began just after 8:40 a.m., to mark the time that the first plane, Flight 11, crashed into the North Tower of the World Trade Center. Sunday's ceremony began with a procession of the American flag, carried by uniformed first responders. They brought the flag into the 9/11 Memorial grounds and held it on stage as a young chorus sang the national anthem.

As the flag was carried off the stage, loved ones of 9/11 victims took the stage to begin reading the names of all those who died in the attacks. In pairs, loved ones stood on stage to read aloud a list of names, anchored by the names of their respective relatives. Many loved ones took the opportunity to say a personal message to their deceased loved one. As they read, members of the audience stood at attention, teared up, and laid flowers on the memorial all around them.

The memorial service was streamed live online. According to data reported on the video, thousands of people were watching online at any given time throughout the morning.

According to BuzzFeed, both Hillary Clinton and Donald Trump attended the ceremony, although neither of them spoke. In fact, throughout the entire event, it was unclear who was speaking — or singing — on stage. Loved ones identified themselves as the mothers, fathers, siblings, and children of victims, but didn't often give their own names. Musical performers did not pause to give their names. Fittingly, it was as if the only names that mattered during the ceremony were the names being read aloud in memory.