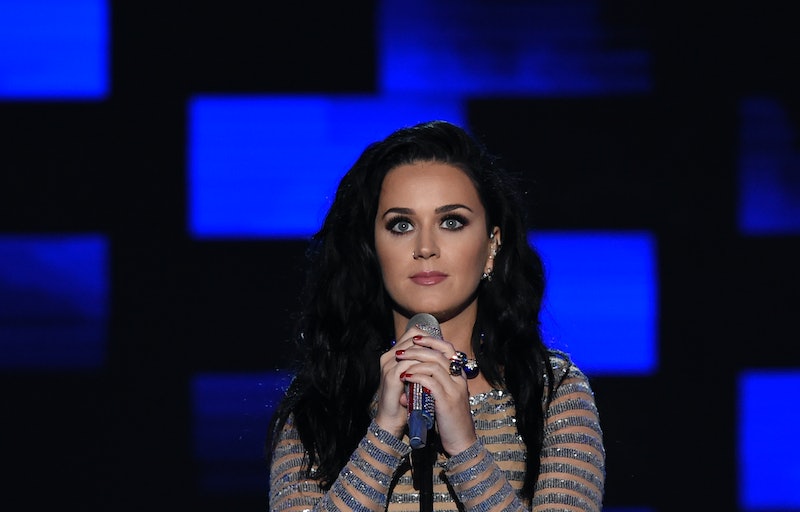 Could one of pop culture's biggest battles finally be coming to an end? On Saturday, Sept. 10, Katy Perry tweeted that she might work with Taylor Swift one day — if the blond pop star says "sorry" first. As fans know, Perry is referring to the alleged feud between the two artists, which seems to have started around 2014 when Swift dropped the song "Bad Blood." Although the singer never officially confirmed that the song from 1989 is about Perry, its lyrics, and subsequent interviews Swift gave, seemed to imply that it was, and rumors of a feud began. Now, though, Perry is saying that she might eventually forgive Swift— only if the singer decides to apologize first, of course.

When asked by Twitter user HerWonkEye if she would ever collaborate with Swift, Perry wrote, "if she says sorry, sure!" Hey, it's not a full-on, solid "yes" any way you look at it, but at least the idea of forgiveness is out there. While neither of the stars have ever actually made official statements on their supposed feud, Swift did say in a 2014 Rolling Stone interview that "Bad Blood" is about a female singer who, "did something so horrible. I was like, 'Oh, we're just straight-up enemies." She also claimed that this singer "basically tried to sabotage an entire arena tour. She tried to hire a bunch of people out from under me." Meanwhile, one of the dancers from both Swift and Perry's tours, Lockhart Brownlie, claimed to The Examiner, that the song was definitely in regard to Perry, ``Obviously we were with Katy for 2 1/2 years, she's like family to us, so we were, like, 'absolutely,'" Brownlie claimed. "We weren't really dancing in Taylor's tour anyway so I had got a little bored and I really wanted to do a promo tour.''

The blood grew bad enough between the two stars that Perry allegedly referred to Swift on Twitter as "Regina George in sheep's clothing," in May 2014. Now, though, with this latest tweet, it looks like the tides may have changed, and Perry, at least, is ready to one day put aside the alleged feud if she gets an apology. That said, how does one apologize for reportedly writing a mean song about someone? Would Swift have to write another song — but this time sing about how great Perry is? It's not likely that the duo would organize some sort of 24-hour recording studio lock-in in which the two of them talk out their feelings and then record a fun dance-y beat to celebrate, but it would be awesome. A Perry-Swift collaboration is something I'd never before considered, but now that it's in the world, I'm so hopeful these two can put aside their differences and create something the fans can really enjoy.