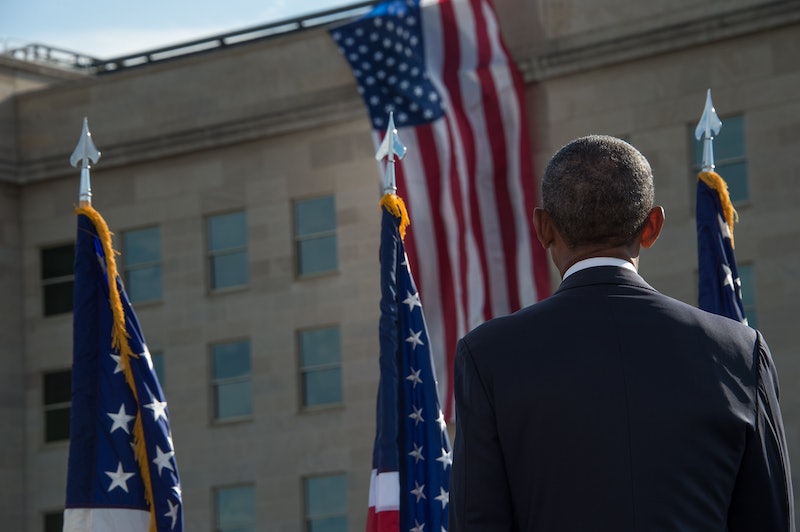 In what will likely be the last time he speaks on the topic as president, Barack Obama delivered a heartfelt speech honoring the nearly 3,000 men and women whose lives were lost in the 9/11 terrorist attacks 15 years ago. Speaking from the Pentagon in Arlington, Virginia, where al-Qaeda terrorists crashed a commercial plane during the 9/11 attacks, President Obama's speech urged Americans to remain united even as terrorist groups continue to attempt to divide the country.

The president extended his condolences to survivors and the friends and families of 9/11 victims, calling their ability to carry on in the face of such tragedy "an inspiration to me and our entire country." He asked Americans to honor those lost in the terrorist attacks of 9/11 by not giving in to fear and holding fast to one of the country's most fundamental principles - e pluribus unum, which translates from Latin to "out of many, one" and is emblazoned on the Seal of the United States. "Our diversity, our patchwork heritage is not a weakness. It is still and always will be one of our greatest strengths," the president said.

Below is the full transcript of President Obama's speech from Sunday's 9/11 Memorial Observance Ceremony at the Pentagon.

Good morning. Scripture tells us, "Let not steadfast love and faithfulness forsake you…write them on the tablet of your heart."

Secretary Carter, Chairman Dunford, outstanding members of our Armed Forces, and most of all, survivors of that September day and the families of those we lost -- it is a great honor, once again, to be with you on this day, a day that I know is still difficult, but which reveals the love and faithfulness in your hearts and in the heart of our nation.

We remember, and we will never forget, the nearly 3,000 beautiful lives taken from us so cruelly -- including 184 men, women and children here, the youngest just three years old. We honor the courage of those who put themselves in harm's way to save people they never knew. We come together in prayer and in gratitude for the strength that has fortified us across these 15 years. And we renew the love and the faith that binds us together as one American family.

Fifteen years may seem like a long time, but for the families who lost a piece of their heart that day, I imagine it can seem like just yesterday. Perhaps it’s the memory of a last kiss given to a spouse, or the last goodbye to a mother or father, a sister or a brother. We wonder how their lives might have unfolded, how their dreams might have taken shape. And I am mindful that no words we offer, or deeds we do, can ever truly erase the pain of their absence.

And yet, you -- the survivors and families of 9/11 -- your “steadfast love and faithfulness" has been an inspiration to me and to our entire country. Even as you've mourned, you've summoned the strength to carry on. In the names of those you've lost, you've started scholarships and volunteered in your communities, and done your best to be a good neighbor and a good friend and a good citizen. And in your grief and grace, you have reminded us that, together, there's nothing we Americans cannot overcome.

The question before us, as always, is: How do we preserve the legacy of those we lost? How do we live up to their example? And how do we keep their spirit alive in our own hearts?

Well, we have seen the answer in a generation of Americans -- our men and women in uniform, diplomats, intelligence, homeland security and law enforcement professionals -- all who have stepped forward to serve and who have risked and given their lives to help keep us safe. Thanks to their extraordinary service, we’ve dealt devastating blows to al Qaeda.

We've delivered justice to Osama bin Laden. We've strengthened our homeland security. We've prevented attacks. We've saved lives. We resolve to continue doing everything in our power to protect this country that we love. And today, we once again pay tribute to these patriots, both military and civilian, who serve in our name, including those far away from home in Afghanistan and Iraq.

Perhaps most of all, we stay true to the spirit of this day by defending not only our country, but also our ideals. Fifteen years into this fight, the threat has evolved. With our stronger defenses, terrorists often attempt attacks on a smaller, but still deadly, scale. Hateful ideologies urge people in their own country to commit unspeakable violence. We've mourned the loss of innocents from Boston to San Bernardino to Orlando.

Groups like al Qaeda, like ISIL, know that we will never be able -- they will never be able to defeat a nation as great and as strong as America. So, instead, they've tried to terrorize in the hopes that they can stoke enough fear that we turn on each other and that we change who we are or how we live. And that's why it is so important today that we reaffirm our character as a nation -- a people drawn from every corner of the world, every color, every religion, every background -- bound by a creed as old as our founding, e pluribus unum. Out of many, we are one. For we know that our diversity -- our patchwork heritage -- is not a weakness; it is still, and always will be, one of our greatest strengths. This is the America that was attacked that September morning. This is the America that we must remain true to.

Across our country today, Americans are coming together in service and remembrance. We run our fingers over the names in memorial benches here at the Pentagon. We walk the hallowed grounds of a Pennsylvania field. We look up at a gleaming tower that pierces the New York City skyline. But in the end, the most enduring memorial to those we lost is ensuring the America that we continue to be -- that we stay true to ourselves, that we stay true to what's best in us, that we do not let others divide us.

As I mark this solemn day with you for the last time as President, I think of Americans whose stories I've been humbled to know these past eight years -- Americans who, I believe, embody the true spirit of 9/11.

It’s the courage of Welles Crowther, just 24 years old, in the South tower -- the man in the red bandana who spent his final moments helping strangers to safety before the towers fell. It’s the resilience of the firehouse on Eighth Avenue -- patriots who lost more than a dozen men, but who still suit up every day as the "Pride of Midtown." It's the love of a daughter -- Payton Wall of New Jersey -- whose father, in his last moments on the phone from the towers, told her, "I will always be watching over you."

It's the resolve of those Navy SEALS who made sure justice was finally done, who served as we must live as a nation -- getting each other’s backs, looking out for each other, united, one mission, one team. It's the ultimate sacrifice of men and women who rest for eternity not far from here, in gentle green hills in perfect formation -- Americans who gave their lives in faraway places so that we can be here today, strong and free and proud. It’s all of us -- every American who gets up each day, and lives our lives, carries on. Because as Americans, we do not give in to fear. We will preserve our freedoms and the way of life that makes us a beacon to the world.

"Let not steadfast love and faithfulness forsake you…write them on the tablet of your heart." And how we conduct ourselves as individuals and as a nation, we have the opportunity each and every day to live up to the sacrifice of those heroes that we lost. May God bless the memory of the loved ones here and across the country. They remain in our hearts today. May He watch over these faithful families and all who protect us. And may God forever bless the United States of America.

Prior to speaking, President Obama reportedly observed a private moment of silence at the White House at 8:46 a.m. ET, the moment the first hijacked plane crashed into on of the Twin Towers of the World Trade Center in New York City, 15 years ago.

More like this
Juneteenth Is Now A Federal Holiday — Here's What That Means
By Lani Seelinger and Syeda Khaula Saad
How To Fight For Reproductive Rights, Based On How Much Time You Have
By Courtney Young
How 5 People Upended Their Lives To Fight For Abortion Rights
By Hannah Smothers
Boris Johnson’s Leadership Is In Question – Again
By Bustle UK
Get Even More From Bustle — Sign Up For The Newsletter