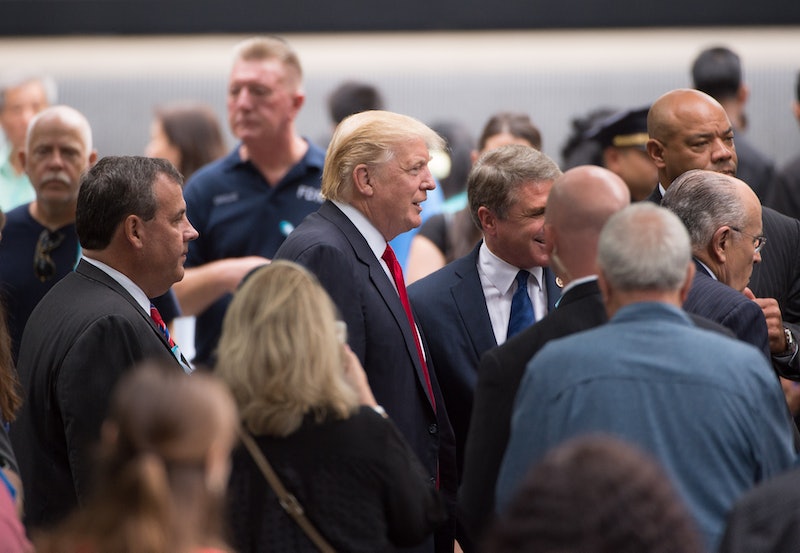 The problem of Hillary Clinton's health reestablished itself as a major campaign issue on Sunday when reports and video surfaced of Clinton suffering a bout of overheating and dehydration at the September 11th Commemoration Ceremony in New York City. While thousands have jumped online in the intervening hours to promulgate theories about any number of degenerative diseases Clinton is allegedly suffering from (it's pneumonia), one voice has been conspicuously missing from the mix. Donald Trump has yet to comment on Clinton's health as of late Sunday afternoon, but his silence makes sense when taken in light of his latest media strategy.

Trump has recently avoided talking about Clinton's health in public, and instead relied on campaign surrogates to do the talking for him. One of his last public comments on the issue was during an Ohio rally in mid-August, when he stated that Clinton "lacks the mental and physical stamina to take on ISIS and all of the many adversaries we face," though he failed to offer any specific evidence to support the claim.

Since then, Rudy Giuliani, the former New York City mayor who joined Trump at the same ceremony where Clinton fell briefly ill, has led the charge in attacking Clinton's health. Giuliani cited online conspiracy theorists during a recent interview as evidence of Clinton's illness. "Go online and put down 'Hillary Clinton illness,' take a look at the videos for yourself," Giuliani said during an interview on Fox News back in late August. He pushed the subject again last week in another interview, using a very similar rhetorical device to one of Trump's favorites. " Well, look, I don’t — I don’t — I don’t know whether she’s not — whether she’s sick or she’s not," Giuliani told Hardball's Chris Matthews. "I do know that there are 14, 15 videos of her that show her in very, very strange condition. I don’t know what it is."

Trump also has his own transparency issues that he doesn't want scrutinized any more than they already are. Trump has yet to release his tax returns, despite enormous pressure from all sides, and has been ridiculed for the letter released by his own doctor, Dr. Harold Bornstein, who told NBC News that he wrote the letter in five minutes. Since there's plenty of room to attack Trump on the same issue, it's smart for him to stay out of the spotlight on this issue in order to avoid retaliation.

The Clinton campaign confirmed late Sunday that the candidate was being treated for pneumonia prior to her dehydration at Sunday's ceremony, and that she needed a brief rest to recover from the exertion on Sunday morning. Campaigns are grueling, intensive work, and what this indicates more than anything is that Clinton is a fighter, working through a serious illness in order to continue pursuing her goals. It's a good thing that Trump hasn't commented on Clinton's health, since all it would do is perpetuate rumors and distract from the real issues.