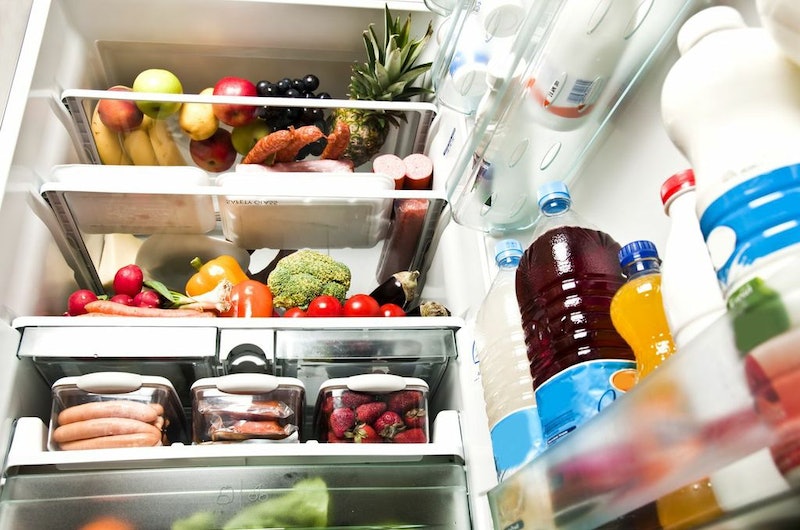 In my experience, when it comes to food expiration dates, there are two schools of thought: the overly cautious and the overly lax. Some people can't stand the thought of you eating cottage cheese for lunch today whose "Sell By" date was yesterday. Some people wouldn't toss a container of cottage cheese until there was fuzz growing on it, no sooner.

The truth is, neither stance is right or wrong. Both are based on a labeling system that has become so confusing and misleading that most of us have no idea what the date on the packaging means. In fact, the majority of Americans are incredibly misinformed about how expiration dates are determined, who regulates them, what different labels (Sell By, Use By, Expires On) indicate, and most importantly: When does this cheese actually become inedible?

This confusion has led to a staggering statistic from a 2013 National Resources Defense Council and Harvard Law report: More than 90 percent of Americans may be prematurely tossing food because they misinterpret food labels as indicators of food safety.

The report insists that a more uniform and easily understandable system is desperately needed to stop this consumer confusion and proposes several improvements. But until that change comes to pass, what can the rest of us do to stay safe without getting rid of perfectly edible food and continuing to make food waste the single largest contributor of solid waste in the nation’s landfills? Here are some guidelines to help you make sense of it all:

When it comes to expiration dates, nothing is as scary as dairy. Honestly, what smells or tastes worse than sour milk? And though you could spend a great deal of time in the milk aisle searching for the gallon with the furthest expiration date to ensure maximum safety, it's easier to remember this: opened or unopened milk (whether whole, 2 percent, 1 percent, or skim) is good until one week after the sell by date on the package, according to StillTasty.com, a site that aggregates food storage information from the U.S. Department of Agriculture, the U.S Food and Drug Administration, and the U.S Centers for Disease Control and Prevention. (That's assuming it is consistently refrigerated, the Dairy Council of California's website notes.)

Tip: Make sure your refrigerator is always at or below 40°F and keep the milk in the body of the fridge, not the door shelf.

Taking after it's relative milk, yogurt is another food people tend to get very nervous about keeping past it's prime. To put your mind at ease, know that, opened or unopened, yogurt is good 7-10 da ys after the sell by date on the package.

Tip: Opened yogurt is at its "peak" 5-7 days after opening, but will still be safe for the above amount of time. However, according to EatByDate.com, another site that tracks the expiration times of various foods, always discard yogurt when it shows any signs of mold, no matter how recently you bought it.

Nuts are a tricky business, as they are usually packaged as a dry good (which have long shelf lives) but have a considerable amount of oil in them (which goes rancid). To give you an idea of what is the safe life for nuts in your kitchen, take almonds. Almonds that are purchased commercially-bagged and out of their shells are considered good for up to 2-4 weeks after purchase in the pantry and up to 9 months if kept in the refrigerator.

Tip: Store your almonds in a cool, dark, dry place. After opening the original packaging, place the almonds in a sealed airtight container to maximize shelf life in the pantry.

The labels for cold cuts are usually pretty easy to find on commercial packaging and pretty important to those of us who like to brown-bag it to work as much as possible. But did you know that deli meats like turkey and ham that come pre-packaged are actually good for one week after their "use by" date before they are opened?

Tip: But keep in mind that, once opened, your deli slices are good for 3-5 days. And if your cold cuts feel slimy, the meat is sticky, or you notice a film on the surface of the meat, throw them away before making your next sandwich.

Olive oil has a surprisingly long shelf life, especially compared to what some of the labels say. I bought a bottle around Valentine's Day that supposedly kicks the bucket before Labor Day, but according to StillTasty, it actually lasts between 18-24 months in both the pantry and the refrigerator.

Tip: Both the fridge and the pantry are suitable options for storing your olive oil — it needs to be kept away from both heat and light to maintain optimum shelf life. Storing it in the fridge may be especially helpful in hot and humid environments to maintain its quality longer. Just remember that when you take your olive oil out of the fridge it might look cloudy and have solidified. Once it comes back to room temperature, you're good to go.

White? Wheat? Whole Wheat? Whichever you prefer, pre-sliced and packaged bread is generally good for 5-7 days after purchase whether opened or not. But, if you want to extend your loaf's life beyond that of a mere week, you can consider freezing it, which will keep your bread at its peak for up to 3 months. And to prevent freezer burn, be sure to wrap the original packaging in heavy duty aluminum foil or place it in a freezer bag.

Tip: Though freezing your bread is an option, refrigeration is actually not. Refrigerating bread can dry it out and cause it to become stale very quickly.

Condiments are confusing. Before they are opened, they can sit safely on a pantry shelf for years, but once opened, some must go right into the fridge or be ruined immediately. And on top of that, they are good for varying amounts of time before and after opening. The rules for these two are as follows:

Tip: If either ketchup or mayonnaise begins to develop a strange odor, flavor, or appearance, chuck them immediately.

Fish can get fishy quickly, and it's important to take that seriously. 1-2 days in the refrigerator is the max time for raw salmon, however it can maintain its quality for up to 2-3 months in the freezer.

Tip: Salmon can and should be stored in its original packaging in the refrigerator until ready to use. And if you are going to freeze your fish, make sure to do so before its refrigerated life is up.

Raw chicken, including breasts, pieces, and wings, will be good for 1-2 days in the refrigerator after purchase, even if the sell by date passes during that time, as long as they have been refrigerated continuously at or below 40 degrees F. Raw chicken can also make it up to 9 months in the freezer.

Tip: Though some foods can make it in the bacteria "danger zone" between 40 and 140 degrees F, chicken is not one of them. If your chicken is at room temperature for longer than 2 hours, it's gotta go.

Tip: To tell if your ground beef has gone bad, even before it was supposed to, look for a dull color, a sour smell, and a slimy texture. If you notice any of these signs on your meat, even if you were making hamburgers from scratch tonight, please throw it out now.

Of all the prepackaged foods that make my life easier and make me feel like a healthier person with the least amount of effort, bagged salad is by far my favorite. Unfortunately, I find that, try as I might, it always gets slimy before I finish it. In general, commercially bagged and pre-washed salad mixes will last for 7-10 days in the refrigerator unopened, but only 3-5 days once opened. So let's try to keep better track of when we bought that romaine next time, no matter what the date says.

Tip: Lettuce doesn't freeze well, so don't try it. Instead keep it in a loosely closed plastic bag in the refrigerator.

I take back what I said at the beginning. In the hierarchy of most frightening expired foods, spoiled milk < rotten eggs. They are really the worst. But when you know that eggs will last for 3-5 weeks in the refrigerator and up to 1 year in the freezer, there is really no excuse for that ever happening.

Tip: You know that cute little molded egg rack you have in your fridge door where the eggs are supposed to go? Don't put them there. The temperature in the fridge door is generally warmer, as it is exposed to room temperature whenever the fridge opens, and if you keep them there, they won't last long.