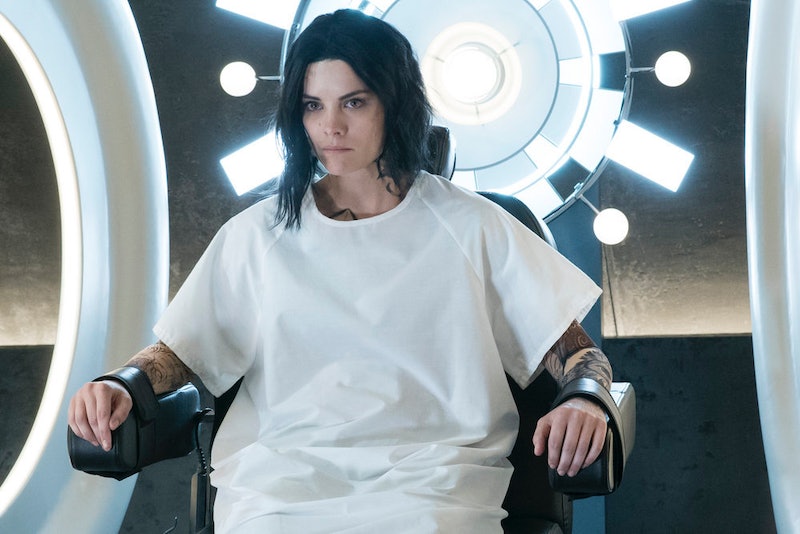 By the time the debut season of Blindspot came to an end last May, the show had taken its audience on a dizzying journey, revealing some — but not all — of the mystery behind Jane Doe's tattoos and the crimes detailed inside of them. But it's been a while since the finale, and the Season 2 premiere on Sept. 14 is going to jump right back into where it left off, so this Blindspot Season 1 recap will be handy to remind yourself of the season's many twists and turns. Let's be honest, the worst thing you can do is go into the new episodes still thinking that Jane is Taylor Shaw. Actually, I shouldn't speak too soon, because the series always finds some way to keep every aspect of the ongoing mystery open. But I'm getting ahead of myself: let's recap the first season.

The series begins with the FBI discovery of Jane Doe: a naked woman covered head to toe in tattoos, who has no memory of who she is and why she's there. Because of her hypersensitive muscle memory and an old, covered-up tattoo, FBI Agent Kurt Weller, the lead on the case, believe that she's a former Navy SEAL. After analyzing Jane's tattoos, it's revealed that they have information encoded inside them that give hints about possible terrorist threats and government information, which sends Weller and his team on cases all around New York City and beyond decoding clues that help them stop attacks.

Those cases are often the backbone of an episode, but really, the most interesting part of Blindspot was the serialized story that was built around them. While the team, who work underneath Assistant Director Bethany Mayfair, is scanning Jane's tattoos for more information, Jane keeps getting triggered with old memories from her time as a SEAL.

A distinctive scar also makes Weller suspect that Jane might be Taylor Shaw, his childhood friend that disappeared when they were young. Since Weller's father was accused of kidnapping and killing Taylor, potentially finding her as an adult could mean both reuniting with a beloved friend and clearing his father's name, so he quickly becomes convinced that Jane is Taylor, especially once a DNA test seems to suggest this. However, conflicting information is presented immediately — another test, plus Jane's flashbacks to her childhood, suggest that perhaps she's not Taylor at all.

Meanwhile, the mystery of who tattooed Jane goes as high as the Deputy Director of the FBI and Mayfair, who both want to keep the truth behind the project known as Daylight — which only a handful of people even know about — under wraps.

In a flashback episode, things are seen from Mayfair's perspective five years ago, when she conspired with other officials to conceal that the NSA attained information illegally, and suffered the suicide of her girlfriend, Sofia. This revelation damages the relationship between Weller and Mayfair, and things are complicated further when Mayfair is ordered to kill Jane just as the target and Weller are starting to develop feelings for one another.

Then, the biggest shock of the season: when Jane is kidnapped by Deputy Director Carter, a mysterious man saves her, kills Carter, and reveals to Jane that she is the one who tattooed herself and destroyed her own memories. This man, Oscar, was once Jane's boyfriend, but she struggles to trust him as Mayfair and other members of the team start to suspect that she may have had something to do with Carter's disappearance. But Oscar threatens that his superiors will kill Weller if Jane does not provide the information they want on the FBI. Sofia also appears, alive, and tells Jane that she, too, was a part of Jane's pre-memory wipe plan to bring down Mayfair and the rest of the FBI.

Through working together, Jane and Oscar somewhat rekindle their sexual relationship, but let's be real: the 'ship we were all rooting for was Weller and Jane, who continue to share romantic moments.

Jane meets Weller's father, pretending that she remembers being Taylor Shaw as part of Oscar's plan. However, on his deathbed, Weller's father confesses to killing Taylor, and when proof surfaces, Weller and Jane both realize at the same time what this means: Jane is able to escape having her memory erased, but is too late to stop her team from killing Mayfair. Weller has to arrest Jane, now sure that she was part of a plan to infiltrate the FBI.

Blindspot Season 1 ends on that major cliffhanger, and there are so many questions about where the premiere will pick up. Will Jane be able to use her SEAL skills to overpower Weller and escape? Will he be taking her to another safe house, vulnerable because of his feelings for her? What does Daylight really mean? Hopefully, all will be answered in Season 2, and now, with this recap, you're prepared to enjoy it.