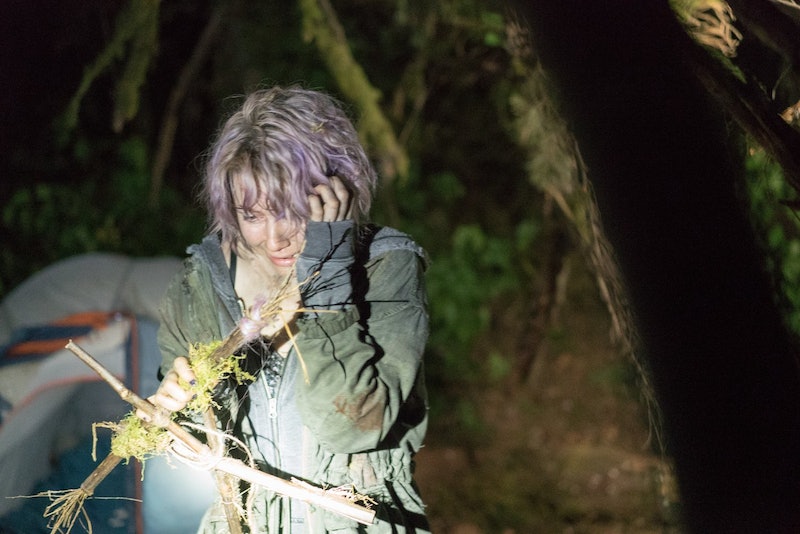 Like any sequel, it's usually a good idea to know the events of the first film before seeing the second. But luckily for you, Blair Witch stands on its own. First, I should mention there was a sequel, called Book of Shadows: Blair Witch 2, which this sequel basically ignores. So, while the events of Blair Witch are set in motion because of the first film — James wants to search for his sister, Heather, the female protagonist from the first film who went missing 22 years prior — it doesn't seem that you need to know much more than that going into it. Yes, it's important to know that Heather and the rest of her friends went missing on their search for the Blair Witch, but that's really all you need to know. According to The Guardian's review of the film there's a "potted campfire history" that will fill you in on all you need to know regarding the Blair Witch.

You see, the films are centered around the, fictional, myth and legend of the Blair Witch, aka Elly Kedward, who was accused of witchcraft and then sentenced to death by exposure in 1785. A bunch of people over the years have gone missing and wound up murdered in the woods where she's rumored to roam. Then, other people have claimed the spirit of Elly possessed them into killing people themselves. It's quite freaky, really. But if I had any guess, Blair Witch will go over the legend of Elly Kedward and the mystery surrounding not only her, but the disappearances of Heather, Michael, and Joshua from the first film.

The IGN review of Blair Witch reads, "First-things-first — the best way to see this movie is to go in blind. Seriously. The original Blair Witch Project employed mystery and surprise to great effect, and this belated sequel works in much the same way."

So, it seems that even though Blair Witch is a sequel, it's a movie that can stand on its own. If you're nervous, however, that you'll be confused, you can rent The Blair Witch Project on Amazon or iTunes to catch up. Additionally, if you're really looking to immerse yourself in the lore, there's a mockumentary called The Curse of the Blair Witch that aired on Syfy in 1999 prior to the release of the movie in order to try and make it seem like the Blair Witch was a real thing. It's also available to rent.

Whether you go in blind or as a massive fan of the The Blair Witch Project it doesn't really matter. Blair Witch manages to stand on its own as a film and shouldn't confuse the viewer all that much. Blair Witch hits theaters on Sept.16.

More like this
The ‘Squid Game’ Season 2 Renewal Teases A Creepy New Figure & A Return
By Brian Anthony Hernandez and Bustle Editors
Taylor Swift's “Carolina” Theme For 'Where The Crawdads Sing' Soundtrack Is Here
By Jake Viswanath
What Colonel Tom Parker Was Really Like
By Morgan Leigh Davies
What Is Elvis Presley’s Net Worth? How The King Earned & Spent His Fortune
By Grace Wehniainen
Get Even More From Bustle — Sign Up For The Newsletter