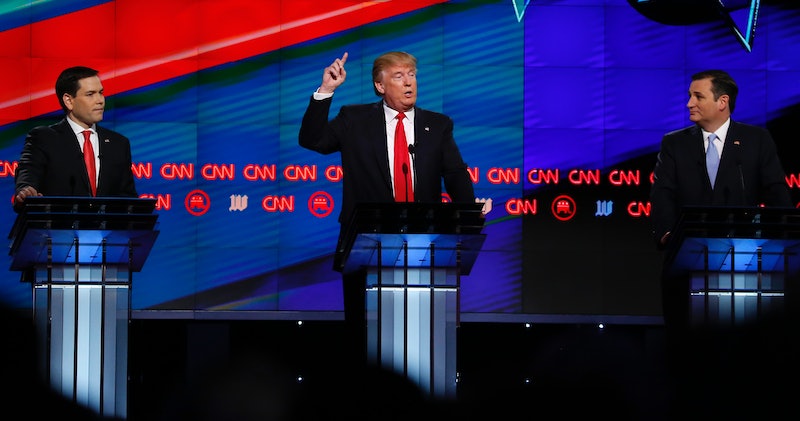 Following NBC's Commander in Chief Forum last week, moderator Matt Lauer has faced criticism for grilling Hillary Clinton regarding her use of a private email server while not challenging Donald Trump's oft-repeated claim that he was always opposed to the Iraq War. Trump thinks the level of scrutiny Lauer has incurred will put pressure on future moderators to be biased against him. Trump proposed on Monday that the candidates "should have no moderator" at the upcoming presidential debates during an interview with CNBC. Trump may think debates don't need moderators, but they play several crucial roles, without which a debate could be chaotic and unproductive.

Trump's suggestion comes amid a national conversation about just what role moderators should play. Chris Wallace of Fox News, who will serve as moderator during one of the presidential debates, recently stated that the job doesn't involve being the "truth squad," and that candidates are responsible for pointing out errors in their opponent's statements. Bowling Green State University associate professor of political science Melissa K. Miller and director of Cornell University's debate program Sam Nelson proposed in a column for CNN, "Why not simply eliminate the moderator?" Instead of a moderator, Miller and Nelson extolled the benefits of a timekeeper:

A timekeeper — rather than a moderator — could time the opening statements, keep track of the 15-minute segments, alert the candidates when to change topics, and signal them to begin their closing statements.

I disagree Wallace, Miller, and Nelson. Having a moderator ask follow-up questions regarding statements from candidates that may be misleading is an important addition to having candidates question and challenge one another's statements. Without that person in the middle, who is tasked both by professional standards and public scrutiny with being as unbiased as possible, it's a "he said, she said" situation. What is more, a moderator can ask candidates for clarification of statements, deepening the perspective offered to viewers — something an opponent isn't as likely to do.

And, of course, the moderator plays a critical role in keeping candidates on topic and preventing, or in some cases interrupting, instances in which candidates simply yell over one another and neither party's point can be heard.

Especially in the current election cycle, replete with theatrics and name-calling, I believe they are absolutely necessary. Trump's repetitive reference to falsehoods, including claims about crime rates and his position on Iraq — needs to be challenged by someone in the middle, just as Clinton needs to be held to more than bashing Trump to ground her points. Voters deserve the structure and rigor that a moderator — if effective — provides.